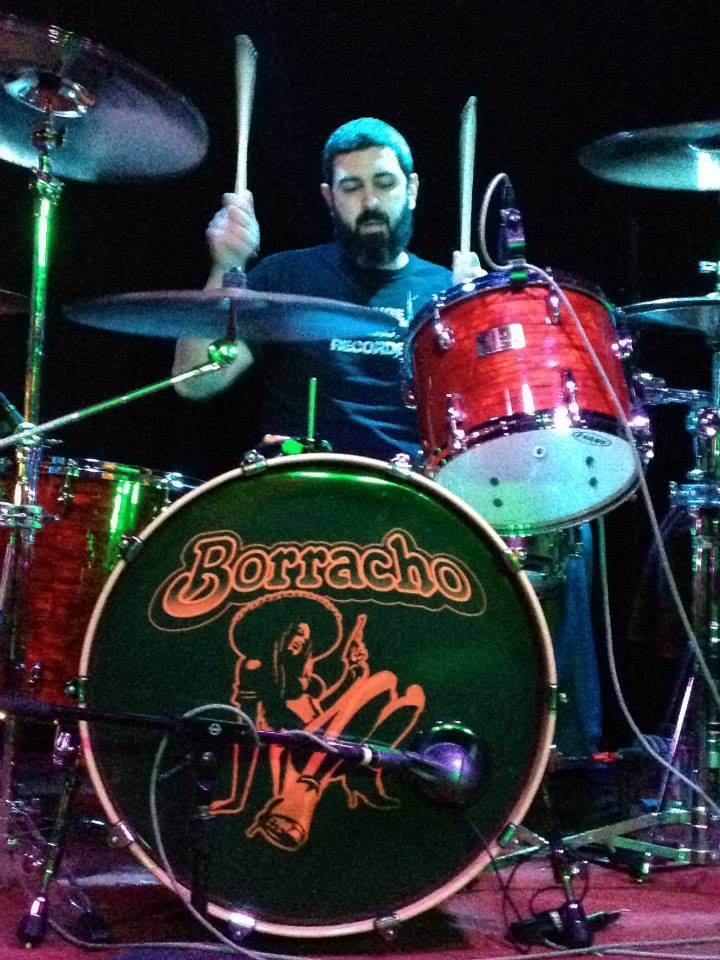 “FOUR ON THE FLOOR – THE DRUMMER’S SPOTLIGHT” #3: MARIO TRUBIANO

Mario Trubiano has definitely been around the block a time or two.  Fans of his previous bands ‘Assrockers’ and ‘Adam West’ will know Mario for his work as the riff-slinging guitarist in those outfits.  Fans of his current band Borracho, will know him for his work behind the drum kit.

In my opinion, the latter seems to suit him just fine.  Anyone who’s picked up Borracho,’s latest offering ‘Atacama’ will certainly agree.  As someone who’s been fortunate enough to see Borracho play live numerous times over the past five years, I can definitely attest to the steam train-like approach Mario gives to his playing.

He’s very forward thinking and steady in his style, always on time, and always a very reliable backbone to each song.  There’s a sense of dependability to Mario’s drumming, it’s almost mesmerizing.  It’s like he’s taken the time to thoughtfully plot out every cymbal attack and every fill.  It’s actually quite gratifying to watch.

On Borracho‘s newest record ‘Atacama’, Mario showcases what Mario does best, groove-laden back beats and steady-as-fuck blows to each drum.  He’s careful not to overplay fills and keeps each track right in the pocket respectfully.  It’s easy to get absorbed in Borracho’s jammy tunes, but Mario keeps each song in perspective and brings a sense of arrangement to the set.  Here’s what he had to say about his musical background and his gear… Dig!  —Brendan

BRENDAN:  Give us a quick rundown of your current live gear set-up.

MARIO:   I’ve been playing a Pearl Masters RetroSpec kit for about 6 years. It’s a 5-piece setup:

BRENDAN:  When was the exact moment you realized you wanted to play the drums? Who was your primary influence at that moment?

MARIO:   Well, I actually have played guitar since I was 11, and would still consider it my primary instrument.  But in junior high, I joined the school band, and there was no guitar as an option, so my first foray into playing drums was there, playing snare drum and percussion.

But when I started playing guitar in rock bands a few years later, we would rehearse at my house, and I always had a thing for getting on the kit and trying to bang out some Van Halen or Motley Crue (it was the 80s).  So, Alex Van Halen and Tommy Lee were probably the big hitters that I emulated, and had an early influence on me as a burgeoning drummer wannabe.  Fun fact – Borracho is actually the first band I ever played drums in.

BRENDAN:  Which one of your songs best exemplifies you as a drummer?

MARIO:   Tough to say, I’d probably go back to our first record to the song ‘Grab the Reins‘ as kind of laying out how I approach drumming in Borracho, and more recently a song like ‘Superego‘ probably represents my caveman style the best.

BRENDAN:   Is there specific gear you prefer to use in the studio that would be different from your live set up?

MARIO:   Nope.  My drums sound great live and in the studio.

I have experimented with some other snares in the studio – it’s actually how I ended up buying the Gretsch.  Frank Marchand had one that I used on ‘Oculus‘, and I had to go get one after that.

BRENDAN:  Any type of pre-show warm up rituals?

MARIO:    Most of the club venues we play don’t have a great green room or backstage area, so what I like to do —stretch out the old back, limber up, warm up with some rudiments, or whatever — I usually don’t have the opportunity to do.  Usually just having a couple of beers and hanging with the other bands.

BRENDAN:  How do you keep things interesting every night while playing the same set night after night on tour?

MARIO:    Well, Borracho doesn’t usually have one set list we play on tour.  Because set times can vary, and we have mostly longer songs, we usually discuss what songs we want to play that night about 10 minutes before we hit the stage, and roll with it.

We never write out a set list.  Ever.  Occasionally, we’ll work out an interesting transition between a couple of songs, and on some of our longer songs Steve sometimes takes an extended solo, and we’ll just jam up there, which definitely makes it fun and interesting.

BRENDAN:  What do you think gives your playing its signature sound?

MARIO:   I’d hardly say I have a signature sound.  I think, with Borracho our chemistry with each other is really our secret sauce.

BRENDAN:  Any brand loyalty?  Are you partial to one drum company over another?  Any current sponsorships or your own signature gear?

When I was in high school, I actually had a job at Vic Firth matching sticks – yep, they’re matched for weight and pitch.  Since then, I’ve always made note of the weight differences with other sticks, and just always end up back with the Vic Firths.

BRENDAN:   What’s the most important piece of equipment currently in your live set up?

MARIO:    Cowbell!  Ha.  Honestly, a good pair of earplugs has always been the gotta-have thing for me.  Helps me articulate the bass, guitar, and vocals from the wash of cymbals.

BRENDAN:   What do you enjoy doing outside of music, that you feel ultimately contributes to your musicality?  For example, a hobby that you turn to in order to stimulate your creativity.

MARIO:   When time allows, I really love to cook a big, highly orchestrated meal.  Cooking is interesting because like music, it’s not just the ingredients in the dish that make it special, but how you put them together.

And beyond preparing just one dish, preparing a meal and timing everything to serve at the optimal time and temperature can be a lot like sequencing a record or set list.  Things need to go in a certain order for maximum enjoyment.

I’m not sure that cooking actually stimulates my musical creativity, but it can definitely be an escape from day-to-day BS that can clear the mind, and of course satisfy the mouth and the stomach!

BRENDAN:   Are there any newly emerging artists that are currently influencing you?

MARIO:   No secret that I’m a huge Elder fan, and am super inspired by how they have grown and developed as a band and as songwriters.

BRENDAN:  If you could give one piece of advice to an up and coming drummer what would it be?

MARIO:    Learn your rudiments, practice a lot, but mostly just have fun.

Join a band, play at the absolute precipice of your ability, surround yourself with players who are better than you, who will push you to improve.

Play live, get experience recording in real studios with pros, and travel / tour as much as you can when you are young and free!

Want to learn more about Brendan Burns and Wasted Theory?  Check our previous Riff Relevant articles about them to read up!