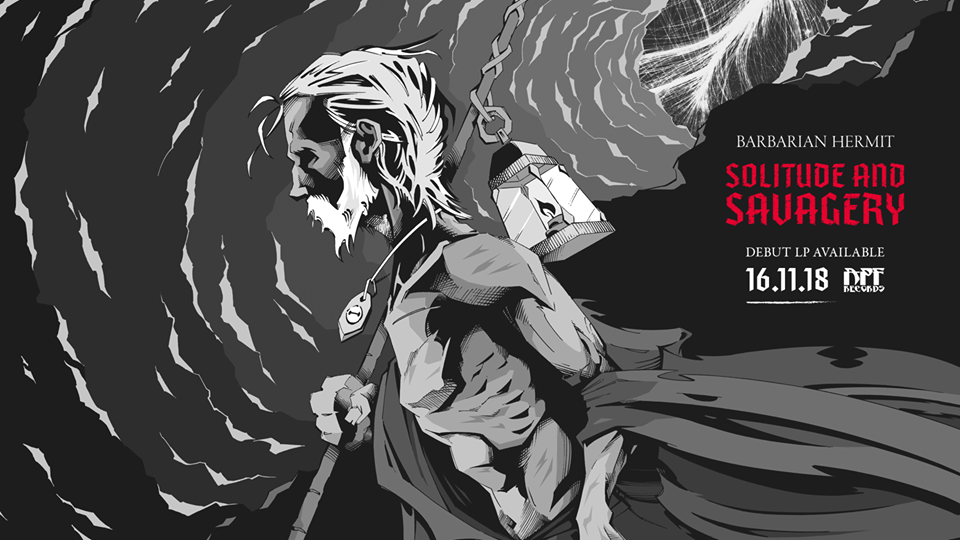 For those that may be just now discovering the band, BARBARIAN HERMIT was formed in 2013, from the ashes of such acts as Bisonhammer, Arke, Severed Fate, Random Act Of Violence, Mountains Became Machines, and That Sunless Tide. Their introductory, self-titled EP came out in early 2016, receiving quite favorable notice from the underground music press. Now they are back with this latest piece of remarkable work.

‘Solitude And Savagery‘ is seven tracks of solid metal, the kind that is aggressive and, in this case, impacted with thick sludge undercurrents. There has been quite noticeable growth and evolution in their songwriting and execution, possibly due in part to some personnel changes since that initial release over two years ago. The quintet that applied their blood, sweat, and beers to the making of this crushing opus are Ed Campbell (vocals), Mike ‘Big Daddy Reegs’ Regan (guitar), Adam Robertshaw (guitar), Rob ‘Spadge Fafner’ Sutcliffe (bass), and Gareth Manning (drums).

There is so damned much kick-assery on ‘Solitude And Savagery‘ that it is staggering at times. It all begins with the electrified rampage of “Enter The Hermitage“. The number is a rapid-fire onslaught of riffs bolstered with a galloping rhythmic skeleton and bellowing vocals. There are some unexpected textural detours, ones like the turn to clean, harmonized vocals at one point, and the pressure loosening injection of cool melodic sections, too.

Melody is something that the guys wield nicely when it suits them and the results are amazing. For examples that shall surely stun you, check out “Black Mass“(video below), “Beyond The Wall“, or “Reawaken“. One of the greatest songs to use it with the fullest effect is the psyche-tinged “Life Breather“, with its sedate intro of stripped back, hazy elements. They lull you into a state of calm at first, before the curtain drops and an avalanche of heaviness is dropped on you like a house of bricks.

Another stand-out number is the album ending “Laniakea“, a song with amazing, epic qualities derived from an almost Irish vibe to the song, a Thin Lizzy-esque sound. Things alternate between the caustic grooves and aggro vocals, to moments of muscular audio and a more spoken narration of the lyrics. Then there are the stellar guitar solos throughout, as the song provides a monumental close to a massively magnificent record.

Yes, clearly BARBARIAN HERMIT has arrived to lay waste to all of that which lies before them, and ‘Solitude And Savagery‘ is the means by which they are guaranteed a successful crusade. You can participate in the campaign by streaming this album here in the review or march over to Bandcamp HERE for other streaming and purchase options.