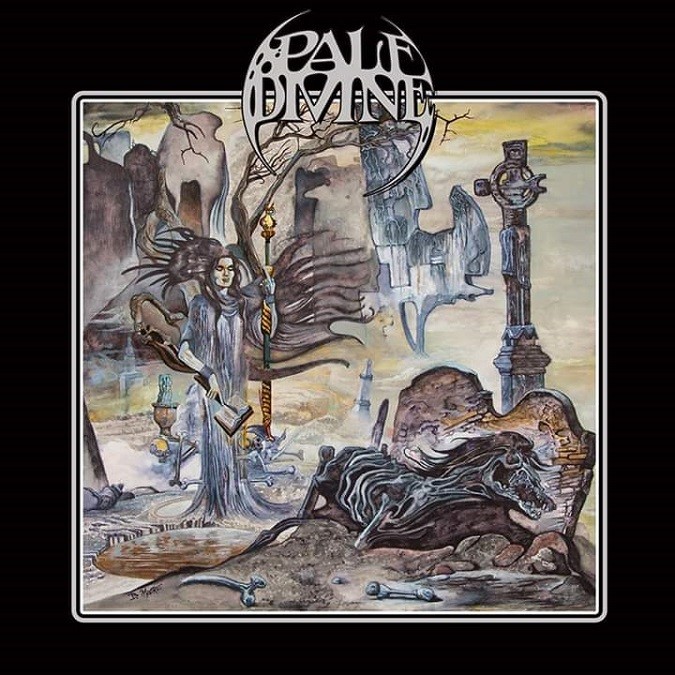 With some albums, even if you can tell there’s something of value lurking under the surface, you know it’s gonna take some work to dig it out.

But with the new self-titled Pale Divine album, released on Shadow Kingdom Records, the band has already done the heavy lifting for us. The music pours out of the speakers with no apologies or need for further explanation (but bear with me as I discuss some of the finer points here).

Pale Divine wears their influences on their sleeves proudly, but with a gift for melody and precise interplay that is rare despite the proliferation of doom bands that circle the globe. Sure, there are things that will remind you of the best moments of the Godfathers of the genre, but they’re only pleasant roadside attractions on the way to your destination. Unlike some bands who offer the equivalent of a promise of an evening’s worth of fun and frolic at the local “gentlemen’s” club, only to find the real ending point to be more akin to visiting the shady 24-Hour clinic for that root canal you’ve been so eagerly anticipating (with only a cross-eyed dentist with suspect credentials on duty), Pale Divine makes the journey worth the gas money.

The thick chug of “Spinning Wheel” gets us off on the right foot, tangles of notes being bent and slid to and fro, lead singer and guitarist Greg Diener delivering the introspective lyrics with a voice that seems custom-made for the material – sonorous, earthy, and devoid of excessive affectation. The emotional guitar solo takes the song to new heights, the wah-inflected lines adding to the narrative in ways even the most astute lyrical observations couldn’t.

“Chemical Decline” nails the aspect that so many doom merchants seem to miss – you’ve got to bring the funk if you want to invoke that unmistakable flavor that helped define early Sabbath. The riffs trudge and swing in equal measure, and that’s something that can’t be taught. Drummer Darin McCloskey has that loose, falling-over-the-cliff feel to his drum fills that make every flourish unexpected and fresh. The vocals are as smooth as volcanic glass, and the guitars… oh man. The guitars are slippery AND crushing, lead lines pouring over the proceedings like molten lava. The band amps up the energy levels in the second half of the song, Diener and fellow guitarist Dana Ortt unleashing thematic, yet absolutely BURNING licks that sound unrehearsed but tight as hell. The sludgy grind that brings the song to its conclusion is the proverbial cherry on top.

“So Low” couldn’t possibly be more aptly named, the Geezer-like bass of Ron McGinnis rattling the floorboards, the glacially slow movement of the riffs threatening to lull us into a false sense of security as their hypnotic waves crash over us. Bluesy guitar lines slash away at us, cutting us deep with their angst-ridden ferocity. The lyrics here are blunt and all too relatable – “My bones are tired / There’s weight on my soul / So uninspired / Been feeling so low” – this is life starkly rendered. Many authentic blues bands would be unable to match the depth of feeling here, Pale Divine cut away the bullshit and find the underlying hard truths of being human.

The familiar opening triplet feel of “Curse the Shadows” quickly morphs into another irresistible groove that will make even the most uncoordinated among us sway along with the music uncontrollably. The subterranean tones of “Shades of Blue” will leave you wondering if the barrage of riffs that led us here has blown your speakers once and for all, and who could blame you? This album demands to be turned up until the needles are buried in the red.

This is doom of the highest order, and anyone who thinks the genre is in danger of stagnation needs to grab a copy of this record and allow its hooks to sink in. Album closer “Ship of Fools” gives us a different shade of black than the ones we’ve been happily wallowing in for the previous 40 or so minutes, showing the band to be adept at illuminating every corner in the grand cathedral of doom.

Epic and essential, Pale Divine has crafted an album that can stand shoulder-to-shoulder with the classics of the genre, and scary, this-they sound like they’re only getting warmed up. You can purchase ‘Pale Divine‘ via Shadow Kingdom Records webstore or Bandcamp page.

Pale Divine is also set to perform at the upcoming fifth anniversary of The Maryland Doom Fest 2019 [Info], as well as the MD Doom Fest Doom Hawg Day winter event. Information on both can be found here: