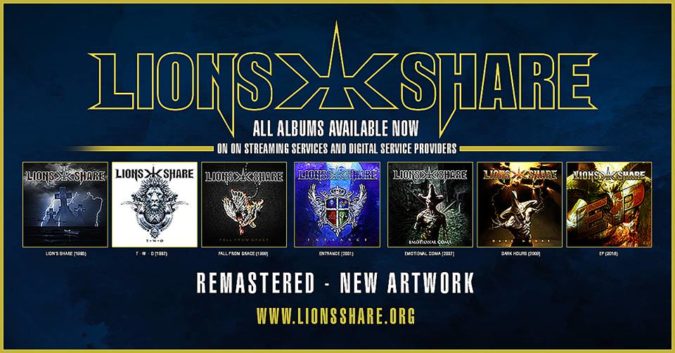 You can check out the new single via a lyric video shared below. It is unknown if the cut will be included on the new album the band is working on. The song, which ripples with stylistic touches similar to classic bands like DIO or Iron Maiden, is inspired by the rise of internet violence, online harassment and cyber-bullying. Singer Nils Patrik Johansson (Astral Doors, Wuthering Heights) states:

“The new single, ‘Chain Child’, is about futuristic cyber violence. It’s an old-school style rocker with a modern touch. It’s our way to honor our heroes and the bands we grew up with, like SAXON, DIO, JUDAS PRIEST, etc. It’s quite possible it will be part of the new album we are working on as well.”

Speaking of LION’S SHARE albums, the band released a new five-track EP, plus its complete catalog – remastered with new artwork – for the first time on streaming services and digital service providers in late 2018. You can find them all streaming and available to purchase at this LINK.