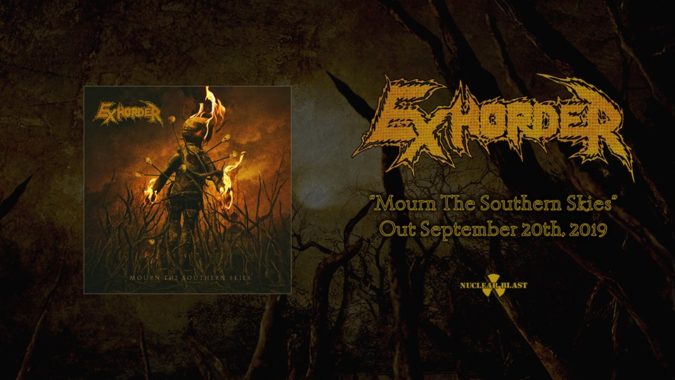 The 2017 announcement that Louisiana’s EXHORDER, one of southern thrash metal’s most iconic bands, was reforming served to excite metal fans worldwide.

It was revealed that original members Kyle Thomas (vocals) and Vinnie LaBella (guitar) had recruited new members to round out the roster of the reactivated act. Not just any run-of-the-mill musicians either, as the modern incarnation of EXHORDER now features ex-Superjoint Ritual guitarist Marzi Montazeri, Heathen/Grip, Inc. bassist Jason Viebrooks, and Forbidden drummer Sasha Horn.

This version of the pioneering powerhouse from NOLA made its live debut not long after the news of their return broke, playing a trio of shows in February 2018. A string of festival appearances followed as fans awaited the arrival of new music from the band that brought us the now-revered albums ‘Slaughter In The Vatican‘ (1990) and ‘The Law‘ (1992).

Today that wait is over, as EXHORDER announces the delivery of their third full-length studio album, ‘Mourn The Southern Skies‘. Set to arrive September 20th from Nuclear Blast Records, the first new recording from the band in 27 years yields the new single “My Time“. Presented in an official video below, the song is classic EXHORDER in every way. From the chainsaw-like buzz of the guitar riffs to the deep trenches of groove that guide it, and of course, the venomously volatile vocals and anti-social lyrical content that EXHORDER are so well known for serving up.

As the album’s lead-in song, “My Time” is a furious statement from the band, a collective declaration that lets listeners know they are back and just as sardonic as ever. Check it out in the visualizer here, along with the stunning album artwork and details, along with information on EXHORDER‘s extensive upcoming touring plans.

‘Mourn The Southern Skies‘ was recorded by Duane Simoneaux at OCD Recording And Production, working with producer Jens Bogren (Opeth, Sepultura, Meshuggah) for mixing and mastering at Fascination Street Studios in Sweden. Arriving September 2oth from Nuclear Blast Records, ‘Mourn The Southern Skies‘ is available in various formats; with pre-order active at Nuclear Blast Records or direct from the band’s webstore.

EXHORDER will embark upon a U.S. tour alongside Kataklysm, Krisiun, and Hatchet this September, followed by a separate European Tour in October. All upcoming EXHORDER live appearances are listed below.