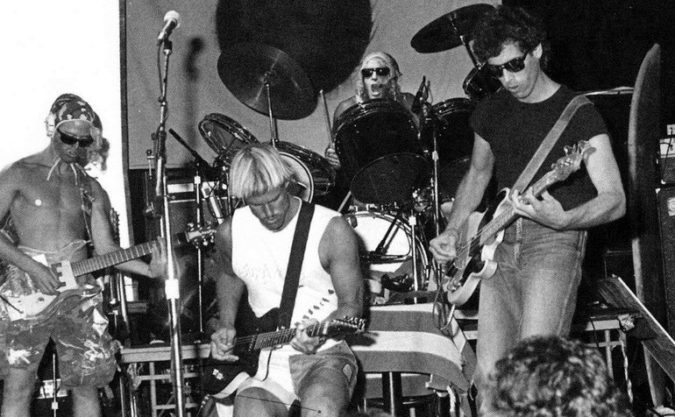 Our origin story today begins in the United States circa 1976, as the nation celebrated its bicentennial that year, Jimmy Carter and Walter Mondale were elected President and Vice-President of the very same.

Other notable happenings included Steve Jobs and Steve Wozniak starting Apple Computers, the knockout cinematic tale ‘Rocky‘ lands that year, Viking 2 also lands (on Mars), and The Damned were the first UK punk rock band to release a single (“New Rose“). Halfway around the world from the U.K., back in the USA and over on the west coast to be Pacific (get it?), Malibu, California residents Dennis Dragon and Drew Steele are forming a band.

Dennis Dragon had previously drummed for both The Byrds and Beach Boys, and his brother Daryl was then on TV under his assumed stage name, The Captain (of The Captain & Tennille fame). Throughout the Seventies, Dennis had been producing soundtrack LP’s for surf movies, but he’s had a revolutionary idea: melding surf music with punk rock. His brougham Drew Steele has his own intriguing trivia facts too, like his being the stepson of actor Gavin MacLeod of such hit television shows as McHale’s Navy, The Mary Tyler Moore Show, and The Love Boat.

The duo recruited fellow Malibu residents and musicians, surfer bassist John Hunt, and guitarists Tony “The Hulk” Creed and John Heussenstamm into the group. Together, these five comprised the core of the band named SURF PUNKS, but this was a party set to music and other players would come and go. Some of those included Jeff “Ray Ban” Eyrich, Scott Goddard, Mark “The Shark” Miller, Andrew Jackson, Jerry Weber, and Kevin Roberts.

This crew was quick to find their fans, for they were their friends and basically the Malibu beach community itself. Playing parties, beach bonfires, the occasional business grand opening, SURF PUNKS started building some nice buzz. Eventually, record producer (and Malibu’s resident Englishman) Denny Cordell saw something of merit in the group and released their first recordings. He did so through Shelter Records in Australia, with a 1977 single, “My Beach, Go Home” b/w “My Wave“.

Energetic, at times even manic, music melding surf rock and punk rock as previously mentioned, SURF PUNKS seemed to have hit upon a winning formula. They released their self-titled first record, an independent release on their own label, Day Glo Records, in 1979. With songs directly tied to the surfing, partying lifestyle, the album garnered the band airplay on the then-fledgling L.A. alternative radio station KROQ-FM, in turn helping lead to a re-release of the album from Epic Records in 1980. This re-release of the eponymous record sold more than 25,000 units in the L.A. area alone.

SURF PUNKS‘ ties to their regional radio outlets were not limited to KROQ alone, as Dragon and The Hulk created the theme song to KLOS disc jockey Frazer Smith‘s signature show bumper, “Cool Patrol“.  With increasing airplay and exposure, SURF PUNKS sold out their first-ever live performance at the Santa Monica Civic Auditorium, no small feat in the least. Their live shows were a spectacle of the surf life, conducted with reckless wild abandon, and a member sitting on a lifeguard tower all the time they were onstage.

With their uniquely aggressive, yet ultimately non-threatening take on West Coast punk rock laden with pop melodies and avant-garde electronic music, SURF PUNKS were a hit. Their somewhat tongue-in-cheek surf turf tales about “locals” (surfers living on or around the beach in Malibu) and “valleys” (commuters from the San Fernando Valley to the private and public beaches of the exclusive Malibu Beach community) had an appeal. It’s one that transcends their much-hyped home vicinity and found equal favor with urbanized city dwellers and squeaky clean, suburbanized youth.

Two more full-length albums followed the first in an expected timely fashion, with 1982’s pair of releases, ‘My Beach‘ and ‘Locals Only‘ through Epic Records. At one point, rock legend Johnny Rivers showed interest in the band by co-producing a single with Dennis Dragon, entitled “Surfs Up Medley“, released on Rivers’ own Soul City label. TV producer Chris Bearde managed SURF PUNKS for a period of time, and with movie producer Brian Grazer and Rivers, the three tried to procure a Hollywood movie deal for the band (that never happened, unfortunately).

Some time would pass before any further releases came, but eventually, they did, with Enigma Records‘ 1988 release, ‘Oh No! Not Them Again’. In typical two-releases-per-year fashion, 1988 also saw the arrival of ‘Party Bomb‘ via Restless Records. Surprisingly, this was sort of where the SURF PUNKS saga ended, abruptly and without much insight as to why or what officially happened to the band.

A compilation of the band’s music, ‘My Beach, My Wave‘ was also issued in 1988, while SURF PUNKS appeared on countless various artists compilations through the years. One sure thing the band had a knack for was retooling other band’s songs. Yes, cover songs, but with a SURF PUNKS‘ twist. Some of the most interesting reinterpretations include takes on Jan & Dean’s “Ride The Wild Surf“, The Sweet’s “Ballroom Blitz“, and Rosemary Clooney’s “Come on-a My House“. The last song also received the video treatment, one of the band’s five known official videos, along with “My Beach“, “Big Top“, “Welcome To California“, and “Shark Attack“.

Without question, SURF PUNKS were one of the most original and distinctly unique sounding acts to emerge from the U.S. punk rock movement. They transcended the genre’s rather limiting scope, a lot of which derived from ideals, sometimes misplaced ones at that. It is never wrong to entertain fans and have a good time, especially when you are doing these things in ways you deem okay and you can live with.

Scott Goddard passed away in 2006. He was followed in death by Dennis Dragon in 2007.