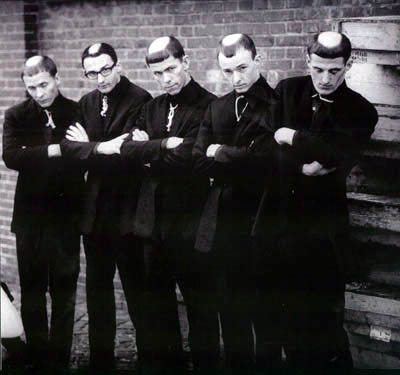 The “Anti-Beatles” is what five American GIs stationed in Germany would come to be referred to as, but in 1964 the band formerly known as The Torquays took a new name, THE MONKS.

In the time spent under their previous band name, musicians Gary Burger (lead guitar, vocals), Larry Clark (organ, vocals), Dave Day (rhythm guitar, vocals), Roger Johnston (drums, vocals), and Eddie Shaw (bass, vocals) played surf music, along with Chuck Berry and British Invasion artists covers. It was not long before the group grew tired of early rock’s traditional format, in turn, it motivated them to explore a highly experimental style of playing. Finding themselves very much outside the norm of that era’s songwriting, they were emphasizing hypnotic rhythms and minimizing the role of melody, while increasing sound manipulation techniques.

Unconventional barely scratches the surface of THE MONKS‘ off-the-wall blending of shrill vocals and unrestrained feedback. With these as their song foundations, the highly imaginative musicians utilize dissonance and clashing harmonics in their rhythmically rooted songs. Doing away with rhythm guitar altogether, an amplified six-string banjo with two mics inside it and chorded like a guitar, is played by Dave Day. Then there is Gary Burger, a devotee of the Gibson fuzz box in pursuit of the most demented highs ever achieved via a guitar. He was not about flashy presentations or self-serving, drawn-out playing to steal the spotlight, no, Burger chose a different route. Instead, he employed short, stinging, acidic riffs or abrasively dense chordal poundings that eventually relent to wash-outs of undiluted feedback.

Burger‘s vocals are also a means of relaying aggression, delivering the disdain and fury of a man in a most confusing world. They crack at times, spitting and spewing forth each song’s lyrics with an unwavering sense of infuriated rage. Unusual approaches to playing, such as jazz drummer Roger Johnston‘s minimal use of cymbals, Eddie Shaw‘s extremely loud, distorted bass, or keyboard player Larry Clark‘s discord-making mastery of tones, makes for long jam sessions. This lent to THE MONKS spending well over a year, as Burger put it, “trying to get the sound right”.

This is not happy-go-lucky music like much of the sterile bubblegum pop happening at the time. Their song lyrics often voiced objection to the Vietnam War and a growing dehumanized state of society in general, and we have yet to address THE MONKS‘ overall image. Can you begin to imagine what look an abstract band named THE MONKS would present themselves as? Of course, they attempted to mimic the look of Catholic monks or friars by wearing black habits with ropes symbolically tied around their necks, and hair was worn in partially shaved tonsures (clean-shaven scalps meant as a sign of religious devotion).

Mind you, sure, this was happening outside the U.S., but the world was no less puritan elsewhere and people found it hard to accept the band. As The Torquays, talent manager Hans Reich promised the band work in Germany when their military careers came to a close. They all remained once discharged, issuing a self-financed single, “There She Walks“, in late 1964, which did well in the Gelnhausen region. Then they were back as THE MONKS – a moniker that was initially met with some misgivings by Larry Clark, whose father was a priest – and armed with a management team composed of Carl Remy, Walter Niemann, and Gunther and Kiki Neumann.

German audiences were mostly startled by THE MONKS, their abnormal look and unusual, avant-garde style of proto-punk music was shocking to most. In the rural areas, people became enraged at what they perceived to be blasphemous; a mere musical group dressed as religious ascetics. These mistaken outcomes lead to physical attacks upon the band, sometimes right on stage, but to be fair, THE MONKS were sonically assaulting the crowds at their live shows.

Despite all the things seemingly working against the band, their management had secured them a recording contract with Polydor Records. The label was ready to gamble on the band and THE MONKS were ready to enter the studio, and did so in Cologne in November of 1965, with record producer Jimmy Bowien. The recording sessions for the album brought the band to the edge of exhaustion, as they juggled nightly performances alongside Bill Haley & The Comets, with early morning work in the studio. Work they did too, recording with analog technology on a four-track machine, the bare-bones production captured what the band sounded like live.

In March of 1966, THE MONKS‘ debut album, the 12-song ‘Black Monk Time‘ was released to very little critical or commercial fanfare. It was accompanied by the single release, “Complication“, the first song on the LP’s Side: B, and, despite the subdued reception, the album contained several irregular firsts. For one, every song on the record was an original, something unheard of in early 1966, as every group debuted with at least one to several cover songs on an album.

By mid-1967, Syd Barrett’s Pink Floyd and the Jimi Hendrix Experience also debuted records made up totally of original compositions, but THE MONKS seem to have been the first rock and roll unit to do so. Then there was the album cover artwork where the word “monks” appeared on an all-black front, reflecting the music’s stripped-down minimalism. This artistic, yet simplistic approach to the debut’s packaging anticipated The Beatles’ famed ‘White Album‘ by over two full years.

Following the initial release of ‘Black Monk Time‘, a six-month tour of music halls and bar taverns across West Germany was undertaken. The tour was debilitating for THE MONKS, their music often alienated audiences, while underachieving record sales began to undermine the band. Bowien urged them to explore a much softer style of music, particularly citing “Yellow Submarine” from The Beatles as an example. The majority of the band resisted the idea, except Day, who used the opportunity to introduce a love song he’d been working on, “Cuckoo“, to the rest of THE MONKS. They recorded “Cuckoo” along with the B-side track, “I Can’t Get Over You“, released the single, then promoted it on several radio shows and the television program Beat Club. The promotional work paid off when the record began charting in some German markets, particularly East German ones behind the Iron Curtain that heard the group on Radio Luxembourg.

The band embarked on a two-week tour in Sweden, where they received positive reviews and concluded the trek with an appearance on Swedish National Television. Upon their return to Germany in February 1967, THE MONKS learned that Polydor Records refused to distribute ‘Black Monk Time’ in the United States, because of the cynical nature of the tracks referring to the Vietnam War. The news came at a peculiar time, as the group was working on scheduling a tour in Vietnam.

The management team handling the band convinced them that another stylistic musical change was needed for a third recorded single. When “Love Can Tame The Wild” (b/w “He Went Down To The Sea“) did arrive, gone was Day’s signature electric banjo, Burger’s frantic vocals, and Sprangler’s keyboards, replaced by a rhythm guitar, subdued singing, and calculated orchestration featuring Larry Clark on piano and Eddie Shaw on trumpet. As if this was not possibly drastic enough, tension among the members of the band was growing, especially with Day who was increasingly irritated by the amount of cover songs in their live set. On top of this, Burger and Johnston abandoned the iconic monk imagery for their stage attire, instead, they were wearing colorful clothing, very much to the annoyance of their bandmates.

Things came to a boiling point as THE MONKS prepared to depart for Vietnam when, just a day before the flight, Burger informed the band Larry Clark had returned home to Texas. Meanwhile, Roger Johnston read about Buddhist monks protesting in Vietnam who immolated themselves and he irrationally believed THE MONKS would meet a similar fate at the hands of the Viet Cong. He abruptly quit the band. Without a suitable replacement for him or Clark, THE MONKS disbanded in September of 1967.

In the bigger picture, the legacy of influence from ‘Black Monk Time‘, and its standing throughout the years is immeasurable. Burger’s weaponized use of feedback was immediately influential on groups like The Velvet Underground and has remained so to the present day. A number of music historians and authors, including Kelley Stoltz, Len Comaratta, and Mike Stax, go as far as crediting Gary Burger with the invention of feedback. The album’s subversive style and lyrical content were radical for its time. Today it is considered an important landmark in the development of experimental music and punk rock.

On November 2nd, 1999, the five original members of THE MONKS reunited to headline the New York City-based Cavestomp Festival, a celebration of garage rock bands from the Sixties. They were joined by vocalist Mike Fornatale, who was needed to sing the high falsetto vocals no longer reachable by Gary Burger. Then, 32 years after the group originally disbanded, they played live in the United States for the first time ever… and by all accounts were seemingly untouched by time. Coinciding with a compilation release from Omplatten Records, ‘Five Upstart Americans’,  their set was recorded and later released as the live album ‘Let’s Start A Beat – Live From Cavestomp’.

The original member line-up of THE MONKS performed together for the last time at 2004’s Rockaround event in Las Vegas. Later that year, Roger Johnston died after a lengthy battle with lung cancer; while another set of reunion shows took place in England and Germany in 2006 and 2007. These were followed by THE MONKS’ official disbandment. In early 2008, Dave Day (born David Havlicek) died at age 66; followed by a 71-year-old Gary Burger in 2014.