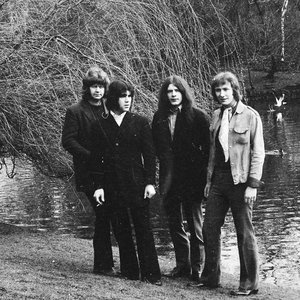 This is not your Grandmother’s rock and roll… but it is ‘Grannie‘, by GRANNIE, released in 1971, and nearly half a century later it is one of rock’s hardest to find records.

More on that in a moment for the backstory of the band GRANNIE began with guitarist Phil Newton in East London, 1968. At that time, GRANNIE was a cover band gigging around their home turf and, to be honest, there was nothing all that remarkable about them. The distinction itself would eventually come and set them apart from dozens of other similar acts; it happened when Newton began writing original songs like “Leaving“, “Romany Refrain” and “Saga Of The Sad Jester”.

With bassist and vocalist Dave “H” Holland, vocalist Fred Lilley, drummer Johnny Clark, flutist and vocalist (and future Mrs. Newton) Jan Chandler, alongside guitarist and vocalist Phil Newton, GRANNIE evolved as a band. Around that time, Newton ran across an advertisement in the famed Melody Maker for an all-inclusive deal at David Richardson’s SRT studios, which offered eight hours of studio time, a master tape, and 99 finished LPs for £100 (roughly $124.oo USD). A booking was made.

In 1970, GRANNIE, joined by keyboardist John Stevenson, recorded a six-song, eponymous entitled album, as per the advert’s offer. Of course, they had no clue as to what a piece of rock and roll history they created; one that leads to argumentative debates even to this day. Some fans claim the music of GRANNIE is a simple, blues-infused melodic rock; while others proclaim it progressive rock. Yet still, others say psychedelic rock. The self-titled record was officially released via SRT in 1971, perhaps best described musically as “Wishbone Ash-meets-Neil Young”, and it quickly became an afterthought to the average fan of rock and roll.

As for the band, they had begun to play venues on the club circuit that included The Greyhound, The Marquee, and The Roundhouse. It would be a short-lived experience, as tragically the journey for GRANNIE ended when all of their gear – instruments, amplifiers, and even one of the very first mellotrons – was stolen.

However, GRANNIE would in time be vindicated; the passing decades pushed the demand for the oh-so limited number of albums out in the public domain. Feverishly sought by genre-specific aficionados everywhere, Record Collector magazine included ‘Grannie‘ in their list of the “100 Most Valuable Records Of All Time“. There, it was declared to be “one of the most valuable jewels from the early 1970’s British progressive rock scene.” It has been remastered and reissued on at least two occasions: vinyl LP in 1993; and CD, remastered CD, and vinyl LP in 2010.