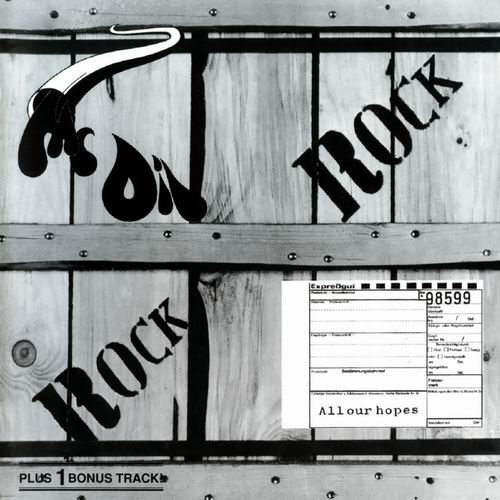 Talk about an obscure band, one that released one respectably solid album and then faded into the rock and roll haze Well, this is them… such a band. McOil was from Germany and played some intense Progressive Rock that contained concrete elements of Hard Rock and early Proto Metal.

The truth of the McOil matter is that there’s not a lot of readily available info on them online or the avenues of normal research. But, here’s what we do know: The band formed sometime in the mid to late 1970s and in 1979, they released their one and only full-length studio album.

That 8-song record, titled ‘All Our Hopes‘, was released through the label Garden Of Delights.

The music is what some people refer to as Krautrock, of course. Simply put, it is a rather powerful record. The lineup within McOil for the recording consists of Walter Utz (keyboards, vocals), Karl Wild (backing vocals, guitar), Andy Tischmann (drums), and Norbert Kuhpfahl (bass).

‘All Our Hopes‘ was recorded at EGE Sound Studio and produced by the studio’s name inspiration, Dieter Ege. The music itself is very textural and not that far removed from the music of similar acts active at that time, such as Deep Purple or Uriah Heep. It is very forward-advancing, chock full of talented compositions with amazing playing on them.

Make no mistake either, McOil are not at all afraid to play and indulge some heavily futuristic styles on their singular recorded effort. Incorporating terrific times of space rock and psychedelia within the music while keeping things nicely flavored throughout.

As I said, a lot of factual band history and such is not readily accessible but I do know that McOil disbanded in 1986. That, and, of course, the other shared absolute in today’s Oldschool Sunday piece, ‘All Our Hopes‘ was McOil’s only recorded output and it is worth checking out.