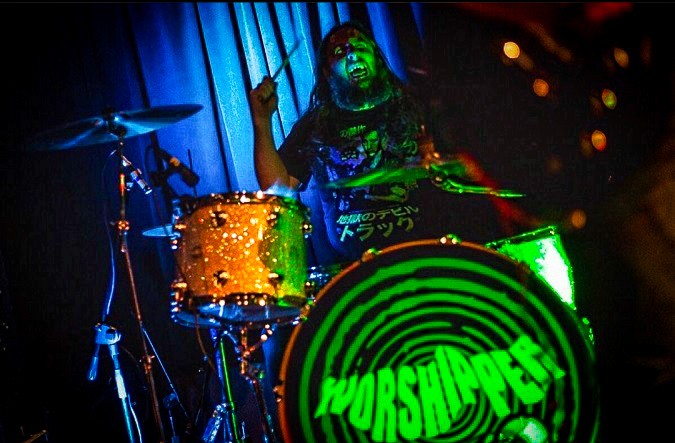 The bands WORSHIPPER and SUMMONER, both from the Boston, Massachusetts area (and both of whom have enchanted my ears for several years), currently possess the same drummer – Dave Jarvis.

Mr. Jarvis has been part of the heavy doom realm of Worshipper since the early days with their debut album ‘Shadow Hymns,’ through their most recent single ‘Slipping Away‘ last month. As of a little over a year ago, Dave also joined on with Summoner‘s atmospheric stoner rock brigade, just in time to play at their ‘Live At Day Of Doom‘ performance, with an album from it soon to be released at the end of this year.

Both bands are in the midst of writing new music and maneuvering the present state of a world temporarily without tours, but let’s get the facts direct from Jarvis himself, as he’s here to be our twenty-first piece in the Gear Assembly! Rock on…

I have two kits in rotation right now. One  is small for touring purposes.

Cymbals are all Paiste Giant Beats with the exception of my hi hats. Those are Zildjian Dark Custom Ks.
24in Crash/ride
22in Crash/ride
20in Crash
14 in hi hats

I used to play guitar and sing in bands until I was about 16, but I wasn’t very good at it.

There were kids around who were way better than me, so I started playing the drums by jumping on other people’s kits when they got up to use the bathroom or go outside to smoke when we were jamming. I was able to pick it up pretty quick and felt so much more comfortable hiding behind the kit.

My half brother’s dad was a drummer in the 70’s and 80’s in some regional bar bands and had this amazing Fibes clear acrylic kit that he let me borrow so I could learn on my own. It just took off from there.

I think my influences at the time were Dave Grohl, Dale Crover, Bonham, and anything else that was simple and big.

I’m rarely satisfied with all of my parts once a song is finished and recorded. This track wrote itself and was so easy to finish and knock out in the studio. I’m not really into complicated parts. I just want my drum parts to be simple and driving.

I like the challenge of working on making the set tighter every night. I have a hard enough time just doing that.

We’ll change out songs here and there, or add songs if needed, but I prefer to keep it the same if possible.

I don’t know if I have a signature sound… I just try to keep the plane in the air, you know?

People tell me my playing has a lot of swing to it. It doesn’t always translate to heavy music, but I like that because I get bored with heavy music being the same a lot.

I play Vater 5a Los Angeles sticks. I can’t live without them. PLEASE SPONSOR ME.

Other than that I don’t really have a ton of brand loyalty.

It’s definitely my Ludwig Supraphonic snare. Getting it has changed my feel.

Having a snare that cuts without having to smash it makes all the difference in the world when you’re playing loud music. I tend to over exert myself when I’m not comfortable or can’t hear what’s going on.

Outside of music I’m a bore. I don’t really have a lot of hobbies besides hoarding vinyl.

I think going to shows and watching other drummers gives me inspiration. I feed off of what others are doing.

I don’t do a lot of seeking out new music, because I stink.

There are so many people trying to do what you’re doing right now. It’s hard to stand out. I would say my biggest advice is don’t be a dick. Show up on time. Return emails. Thank bookers and clubs for helping you out.

I find that scenes will out people/bands who don’t act at least somewhat professional. Make friends. That’s what this is all about. If you think you’re gonna be rich from doing this, you’re lying to yourself.

It’s brought it to almost a complete halt honestly. No practices. No shows. No tours. My drums are at my practice space but I rarely get to play them. Both bands are writing in their own capacities.

With Summoner, we’ve managed to get into the practice space and rehearse a new tune a few times before going into the studio and recording our first track with me on the drums. We are slowly working on a new album.

Worshipper hasn’t played since we got off the road in March when the world shut down, but there are songs and demos being shared via dropbox for now, which is good news. When this blows over we’ll get back to work on album #3.

I think my DW kit, but with a 24 inch kick drum instead of my giant 28 inch kick. Other than that, I have the gear I want.