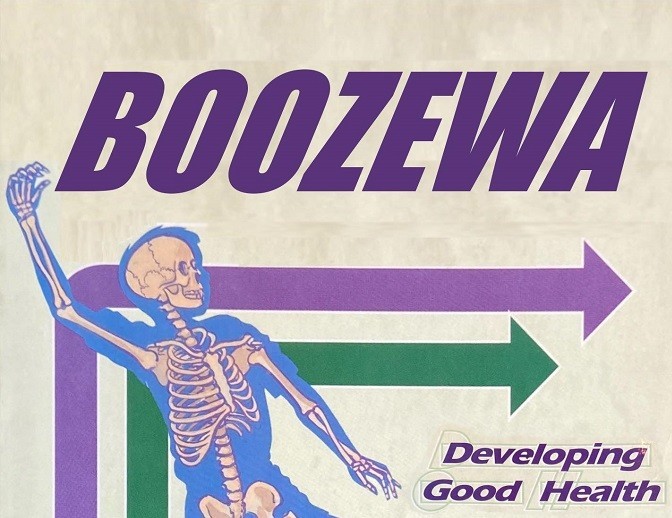 The Coatesville, Pennsylvania alternative heavy rock act BOOZEWA will be dropping their new three-track release, ‘Developing Good Health’, on both CD and Digital this coming November 26th. Today, we have an exclusive stream of a new single “Dingmanz” off that very release.

BOOZEWA is the good cheese on recyclable plates, BUDdy marys in the fancy glasses, top-shelf scotch, and top-shelf riffs. Created from the dank 2020 basement thoughts of their minds, certain faces may seem a tad bit familiar to some of you. That might be due to two-thirds of the Pennsylvanian heavy grunge rocking doomsters Backwoods Payback making up an equal two-thirds of the new project that is BOOZEWA.

Jessica Baker plays the bass and does some hollering in the band. She enjoys books, scotch, and making things fall off the walls with her amp. Rylan Caspar plays the guitar and does a little hollering as well. He had been missing in action for close to a decade but like the Bionic Bigfoot of the past, he has decided to reveal himself again. Mike Cummings (mRc) plays the drums and does a lot of hollering, both in and out of the band. He has a healthy obsession with pro wrestling and aliens.

The most accurate description may be straight from their own mouths:

“The Valium version of the Pixies and Sonic Youth, that’s perhaps the best way to describe BOOZEWA.”

‘Developing Good Health‘ is the first BOOZEWA recording not done by the band themselves using mRc’s Tascam 4 Track. It is a pretty fun look at what the folks can do with MORE than a cassette deck and microphone!

Recorded and mixed by Mike Kerchhner at the Dark Church and mastered by the band’s longtime friend and Philadelphia mainstay Arik Victor of Creep Recording Studio, these three songs form a little love letter to the things near and dear to the band. ‘Developing Good Health’ will be out on November 26, 2021, on both CD and Digital formats.

After you check out “Dingmanz“, the new BOOZEWA single below, go find a live date to see them near you over the next several weeks. You’re also welcome to learn a bit more about mRc in an interview he did about a year ago for our Gear Assembly series.

Catch BOOZEWA live this Winter 2021 in a bunch of spots: