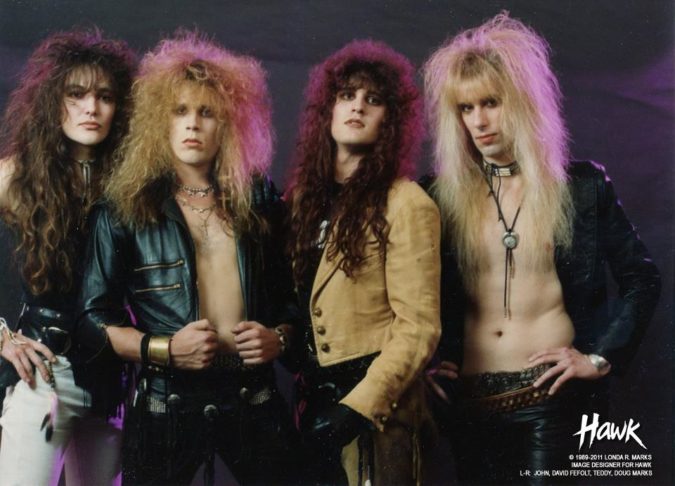 It was the early Eighties when guitarist, and guitar teacher, Doug Marks relocated to Los Angeles, California from Denver, Colorado to pursue a career in music.

In 1982, Marks launched Metal Method, a mail-order guitar playing instructional course consisting of cassette tapes and booklets, at first. The business had a dual purpose to it, one as a response to his former students’ requests for his continuing to teach them, and two, to supplement his own income. Today, Metal Method is one of the longest established, most popular video guitar lessons, having changed with the times as necessitated and teaching well over 100,000 guitarists to date.

We are here to look at Doug Marks‘ other musical endeavor, the heavy metal band HAWK, formed in 1984 with some now well-known names alongside Doug in the band. They were original drummer Glenn Burtis – soon replaced with Scott Travis (Judas Priest, Racer X, Fight) – singer Charlie Wayne Morrill (King Kobra, BulletBoys), and bassist Lonnie Vincent (BulletBoys, King Kobra). The band was one of the many that were hammering it out on L.A.’s exploding Sunset Strip music scene circa the mid-80s and despite their “glam” look, HAWK was most definitely a heavy metal band.

Their sound was one comprised of fiery, technical guitars, driving rhythms, and higher-end, soaring vocals. Unfortunately, this version of HAWK was destined to be short-lived and would be over within a year of its formation, having never officially recorded together. However, the story of HAWK does not end there as 1985 saw Doug Marks begin to record a solo album.

The album eventually became the first HAWK studio record, an eponymous recording with a lineup different than the one that had forged a name for the band on the live circuit. Marks was the only member of the band to appear on the album, contributing both guitar and bass. The roster was rounded out by drummer Matt Sorum (Deadland Ritual, ex-Guns ‘N Roses, The Cult), singer David Fefolt (FireWölfe, Fifth Angel, Masi), and keyboardists Steve Ayola and David Tolley.

Now with a first full-length album recorded and in hand, the unthinkable happened and the record is basically shelved. That’s right, it goes mostly unreleased at the time with only a small number of vinyl formats made available by Metal Method. A live concert video, “Hawk At The Roxy“, was independently released in 1986, but HAWK the band was pretty much over before they really had begun. That’s not to say that their legacy is, as interest and reverence for HAWK continues on, and in 2009, there was movement in the band’s name.

This is when FnA Records learned of the long-dormant ‘Hawk‘ album and expressed interest in releasing it. With some retooling applied, including different album artwork, the 10-song recording was re-branded under the title ‘Let The Metal Live‘ and released.

Now, another decade since the availability of that version of the album, Doug Marks has announced an all-new run of the original self-titled album. It is available in limited edition CD format for the first time ever, along with all major streaming services (and streaming below). Marks also revealed that he plans to record a long-awaited sophomore HAWK album in 2020 if he believes the interest is there.

“I would like to record an album next year. This album release may show me if there’s interest. What I would like you to do is similar to crowdfunding, except you don’t need to send any money. Show interest in the project by putting Hawk in one of your Spotify or Apple Music playlists. Purchase the CD or download from iTunes. You can pre-order the album on our site, but I would prefer you wait a few days and order it from iTunes. The reason is, that is activity that will be registered by Apple. A purchase on my site is appreciated (and more profitable) but I’m wanting to create interest online.“

Maybe you are an old-school metalhead that remembers HAWK well and wants to experience this nostalgic era in music history again. Perhaps you are a newer-age metal lover that appreciates the roots of the music and bands you like so well now. Either way, here’s your chance to show the interest mentioned by Marks and obtain the long-lost HAWK album as it was intended by purchasing it.