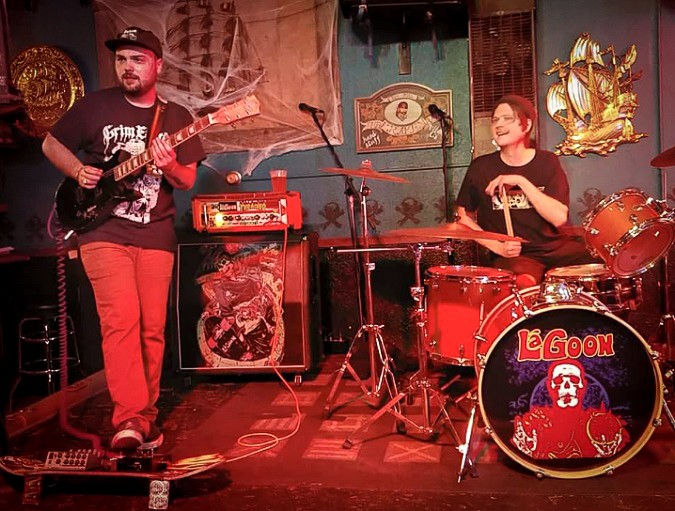 Their most recent and fourth album was just released in June 2020, ‘Father Of Death‘, which we were honored to premiere the advance stream of [here]. LÁGOON guitarist and vocalist Anthony Gaglia is here today as our seventeenth piece in the Gear Assembly! Rock on…

I currently play two guitars, a Baxter (hand-built in Canada) and a Recykiller (company I started building guitars from recycled plastics).

I play with two amps. The first is a Orange CR120 going through a Marshall 4×12 cabinet. I have one pedal linked to this amp, a Deadbeat Sound ‘Thank You’ Distortion/Sustain.

My parents put me in lessons at a young age, but it wasn’t until I was about 17 that I really started caring about playing the guitar.

Heavy music isn’t as widely accepted in mainstream society, so I think all of us that play this music could be considered one of the unwelcome.

We’re all about trying to make our albums sound as close to what we sound like live as possible, so I always use my live set up to record.

We tend to practice the day before or early on the day of our shows. Once we get to the venue and are set up, our main concern is grabbing a few drinks.

Brady and I are best friends, so it’s pretty easy keeping things fun on the road. We’ve found ourselves in some weird spots.

As far as playing the same set, usually we change the set up a bit from night to night. At the very least, we change the order of the songs we play.

I’m constantly pushing my amps to their limit to fill in the gaps because we are a two piece.

I wouldn’t say I have a signature sound, though, just like to play loud!

My Orange CR120. It may be solid state, but it’s the best damn solid state amp on the market. I’ve had it for 5 years now, and have taken it to hell and back with me!

Our music is riddled with skateboarding references and it’s the only thing, other than music, that I’ve been obsessed with.

Riff Relevant:  How has the virus pandemic impacted your music life or career? What are some ways you’ve been doing things differently? (Note: some of the answers may be from several weeks ago.)

We’ve had a ton of shows cancelled on us for the past few months, including our album release and our maiden voyage to Canada to play The Electric Highway festival in Calgary.

We tried to not let it slow the album release down, so we set up a live stream show on Facebook the day of the release (March 22nd). [Live set is streaming below.]

I’d honestly keep my CR120 and 4×12 cab, but I’d replace my Peavey bass amp with an Orange Terror head and an Orange obc410 cab.