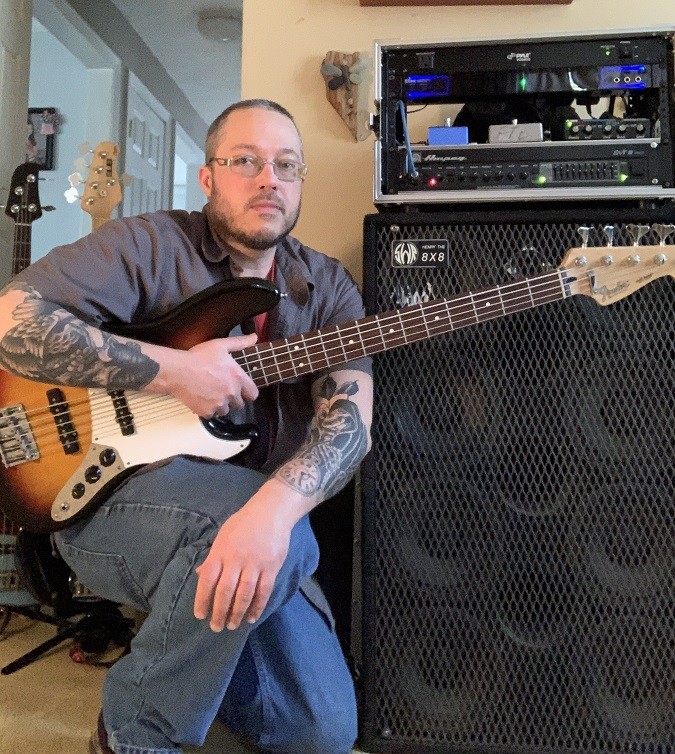 Eastern Connecticut’s traditional doom, heavy metal crew MOURN THE LIGHT has been around since about 2017. Their first release debuted in June 2018, the ‘Weight Of The World‘ EP [review], followed by a second EP, ‘Death Is Lurking‘ in September 2019. After a member relocated, they secured their newly opened bassist slot with Bill Herrick, who is our featured musician for today.

With MOURN THE LIGHT‘s new low end solidly settled in, the band then spent some time to hit the studio and release a new single, which is streaming below. Bill Herrick is here today as our eighteenth piece in the Gear Assembly! Rock on…

In 1988, I was in 8th grade and my buddy brought over a dubbed cassette of Metallica’s ‘Ride The Lightning‘.

We listened to it in awe and decided we were starting a band. He already had an acoustic guitar that he had was learning to play, so I started saving my paper route money to get a bass.

Cliff Burton was the first guy that really turned my head. I didn’t know anything about distortion pedals… I was listening to “Anesthesia” like… “How the hell does he get a bass to sound like that!?“

I recently recorded my 1st tune with Mourn The Light, “Blink of an Eye,” and I’m really happy with how it came out.

The bass line is very representative of what I like to do… sometimes doubling the guitar, sometimes harmonizing a lick or run… there are some two and three note chords in there for good measure.

I like the bass to stand out subtly in places where it makes sense and provide the foundation where needed. You can check out the song on YouTube currently. [its official release is out now on bandcamp and streaming above.]

The really interesting thing about the session for “Blink of an Eye” is that we took our live set up into the studio and recorded it. What you are hearing on that track is basically what Mourn The Light sounds like.

I’d never done it this way before, but again, really happy with the finished product.

I usually find myself noodling away at tunes like “Orion” by Metallica and Iron Maiden’s “The Trooper,” trying to get that right hand loosened up and ready.

To be honest, I usually don’t feel like my hands are where they should be with comfort, speed, and endurance until I’ve been practicing for hours straight… which only happens on days that I’m home alone with nothing else on the agenda.

I try to get one marathon practice in each week but it’s not always an option.

I’ve never done extensive touring, so on the times I’ve been able to play in different cities even five nights in a row, just the act of having a week where performing was the only focus in life was interesting in itself.

I think in 2018, I played about 50 or 55 shows just about every weekend there was a gig. Performing the tunes was never uninteresting. Once on stage and plugged in, playing the set is a rush.

I play finger style and tend to play pretty hard, not light with my right hand for sure. That’s the basis for my tone.

I leave both my distortion and chorus pedal on, all the time. Both of those effects also pass the dry signal through, so there is a foundational clean tone under the fuzz and wetness to keep those low notes tight.

I love that Ampeg amp, I bought it new 23 years ago and never thought about replacing it.

I’ve really come to prefer the tone of the Fender Jazz Bass. I used active basses for a long time, but once I got hold of this Jbass, I haven’t been reaching for the others.

The “secret weapon” is the Source Audio Gemini Chorus pedal, which adds just enough color to help the bass stand out in the mix.

It’s completely customizable through a phone app… I dialed it in for my purpose and never touched the settings again.

Music is the hobby, although it can feel like a lot more than that. Most free time and energy go into the band.

My wife and I like bringing my 120lb Italian Mastiff rescue out into the woods when we can, he is a big part of our routine as well.

I can’t hear Bone Church enough. Those duel guitars/ harmonies remind me that as a bass player in a band with only one guitar, there are things I can do to make the band’s voicing through instrumentation more interesting in certain places.

Practice. A lot. And work with people that you like, it’s not worth it if you’re stuck in a situation that stresses you out or makes you feel resentment. There are others out that are a better fit.

Already cancelled a bunch of shows, including what would have been my 1st trip to play in Philly and New Jersey.

There was a brand new tune we were going to debut during this string of cancelled shows, so we recorded it at rehearsal and posted the vid.

Mourn The Light is also scheduled to begin recording our 1st full length album… with travel bans and social distancing, we are not getting together for rehearsals… so everyone really has to take their personal practice time seriously.