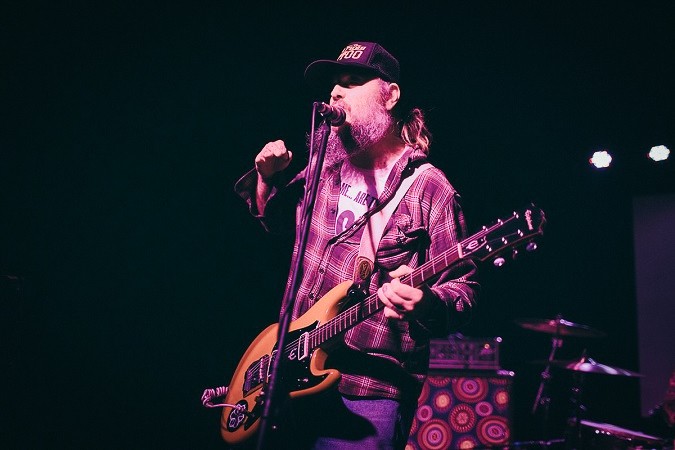 Each article in the Gear Assembly series features a different musician answering the same questions, highlighting both their varying preference in music gear, as well as their own music that results from using that gear. Hopefully, it brings awareness to both the artists and their gear makers. You’re reading, so we’ve got at least one more. Find new music, learn about who’s making it and what they use to create it…

Ask anyone who might know, or know of, him and they’d likely confirm that Mike Cummings is one of those semi-rare genuinely good humans. Plus there’s this thing he consistently does on stage with his band BACKWOODS PAYBACK where everyone’s face just gets rocked right off their skull; a lovely trait on its own. He appears to know an endless amount of people and has at least a decade & 1/2 of tour history, so both statements could be pretty easily verified by any doubters.

In addition to B.P., Mike has also released several solo musical outings and recently announced a new project named BOOZEWA, which you can learn more about below, as he’s here to be our twenty-second piece in the Gear Assembly! Rock on…

I’ve sort of settled into this rig over the past few years and I’m really happy with it.

I run two half stacks at the same time. An early 80s JCM800 [Marshall] head and cab with an Electro Harmonix Polychorus in front of it for some flavor at times is my main sound.

The second rig is currently a Randall Commander 100 head through a late 70s Sound City 4/12 cab, with an EarthQuaker Devices Acapulco Gold pedal for the fuzz. I love the blending of an overdriven tube amp and the bite of the solid-state. It’s like having Sabbath and Flag rolled into one!

My main guitar is a 2004 Dan Armstrong reissue with the humbucker pickup installed. Volume and tone opened all the way up.

My backup guitar is an Epiphone ET270 that I had a tech friend replace the floating bridge in it with a regular bridge and he moved everything back to keep it in tune for where we tune to.

I started out playing bass guitar and loved it. For the most part, I taught myself or learned from other friends that knew a little.

When I started writing songs on my own I had a hard time conveying to others the sounds that were in my head, so I traded a bass I had found at the flea market for a guitar and started learning that. Neil Young, from that moment, became a huge influence.

Just getting sounds out of the thing, doesn’t matter if it’s “right” or “correct” yanno… if it sounds good to you, do it!

I think “Whatever” from our last record Future Slum captures everything I love about playing. It’s melodic, it’s abrasive, it runs through a good sampling of what’s happening in my head most times.

On the last record, I used a few pedals that I just couldn’t use on the road, whether it’s because they are finicky or just too hard to replace. But really for the most part what we play in the studio is exactly what we take on tour.

I stretch a bit and do some vocal warm-ups before the play but for me, it’s afterwards that the “ritual” comes into place.

From packing everything away to just getting away and finding a quiet place, even if just in my head. I need that time to come back down, for lack of a better term.

We try to not play the same set every night. It’s something we really worked out on our last U.S. tour.

Every night has some songs that just flow into each other better than others, of course, but I love the idea that each show is its own event. It’s a living breathing thing of itself. Some nights are fast and angry, some nights feel slower and smoother…

I have no idea, man. I don’t really have much in the real lessons of music department, so as cliche as it may sound I guess it’s just me that gives it the sound… lol.

We are sponsored by nobody (wink to Uncle Neil), but EarthQuaker Devices has always been good to me – from the earliest times of meeting them in Akron, OH at a little bar, to fixing things for me when I inevitably break them on tour.

They stand by their pedals and are honest people. I can’t say enough good things about them.

It has to be the Marshall JCM800. I’ve played many of them over the years but there’s something special about this one. It has a “sound” that I haven’t found in anything else.

Whenever someone asked what pedals I have going to get the sound from it and I reply with “it’s just that head” they are always astounded. So am I!

I got really into wood burning a few years ago and tend to head there when I’m not in a musical mood.

Code Orange continues to blow me away. They have taken hardcore /metal /industrial to a new place and I think they are truly in a genre of their own at this point.

Listening to their newest record is like finding a lost gem from my favorite bands, except it’s brand new. Absolutely inspiring.

Play. Just play. Don’t worry about what you’re doing or what you can or can’t do. Just. Play.

It’s fucked me pretty bad at this point. When I’m not touring on my own I work for other artists doing driving, guitar tech, stage managing and COVID-19 has so far cost me about 10 months of work with more cancellations to come.

Playing out with Backwoods Payback isn’t going to be happening for the foreseeable future as well, so my normal outlet for creativity / hardships is not available either.

That’s how BOOZEWA came about. The three of us all live together and it only made sense a few months into the first shutdown that the only music that was going to happen is what we could do ourselves. I’m playing drums in this band and it’s been challenging and fun.

Aside from that, I was working on the fields at home and in the greenhouse, just keeping busy and trying to keep healthy mentally and physically.

I’m pretty happy with everything I have really. My acoustic guitar acts up every now and again and I wouldn’t turn down a Martin D28 (lol) but really man, I’m set.

I’m here, I’m alive, I’m ready to get back out there… hope to see you when we do.