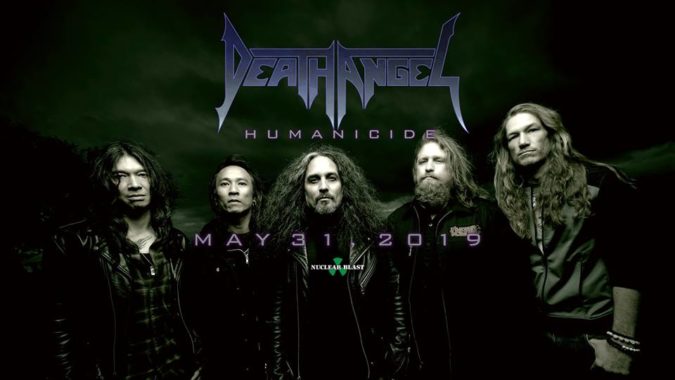 With today’s announcement, the band unveils the album artwork, track-listing, and first new single, the “Humanicide” title track, with a visualizer. The arrival of the new record will be preceded by a U.S. tour that sees DEATH ANGEL, alongside ACT OF DEFIANCE, as both provide direct support to OVERKILL. You will find the touring itinerary shared below the video clip on this page.

For ‘Humanicide‘, DEATH ANGEL returned to work once again with friend and producer Jason Suecof (Charred Walls Of The Damned, Trivium, Six Feet Under) at Audiohammer Studios for the recording and mixing, with the legendary Ted Jensen of Sterling Sound handling mastering. After working together on three previous releases, Suecof seemingly has embraced his role as the (symbolic) sixth member of DEATH ANGEL.

According to the PR release that accompanied today’s news, DEATH ANGEL continues to revel in their place as one of U.S. metal’s most respected bands. Their refusal to embrace flimsy musical trends, while maintaining their signature style of aggression and galvanized technical edge, has placed DEATH ANGEL at the forefront of the metal underground.

At the same time, they assure fans that ‘Humanicide‘ will push the envelope just as they have always done, this time with new elements that include acoustic embellishments, guest musicians, and for the first time ever, piano-based moments. Today’s song premiere, “Humanicide”, triumphantly represents the entirety of the album, immediately energizing the listener with its ferocious intensity.

“I wanted to write something that metal fans could really grasp onto. Something dark and intense, that still makes sense. Right now I think it’s so apparent that the earth is in a sickened state.”

Guitarist/songwriter Rob Cavestany, the only remaining original member of the band, adds:

“When I wrote the music for our song ‘Humanicide,’ I was shooting for an album opener that would have all the elements of an epic thrash opus.  This meant a classic metal style intro leading into a ferocious ‘Bay Area Thrash Riff-o-Rama’ complete with a crazy middle build up section to ramp up the circle pit until it’s all whipped up into a frenzy by the time the frenetic guitar solo hits, then concluding with a maniacal musical section leading into the outro.  All it needed was the lyrics and vocal delivery to match the intensity and Mark went above and beyond the call of duty!  Some of his best work in my opinion.  One of my favorite DA songs for sure, it feels like the follow up to our song ‘Thrown To The Wolves’.  Can’t wait to play it live!”

‘Humanicide‘ is adorned with ominous and stunning artwork created by artist Brent Elliott White (Megadeth, Job For A Cowboy, Trivium). It will be released from Nuclear Blast on May 31st and is being made available in a variety of formats, with pre-order active now at this LINK.