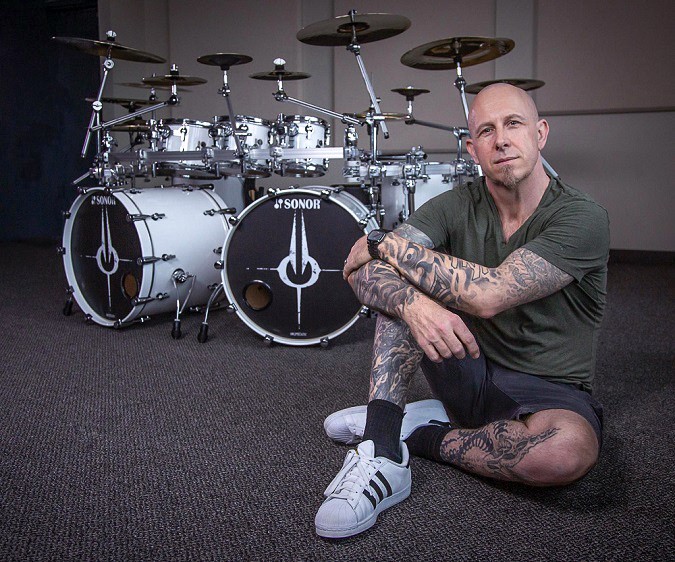 Ryan Van Poederooyen or “RVP,” which he is likely more known as, is a voraciously ambitious drummer from Vancouver, Canada. Among his quite notable list of professional distinctions are his times as drummer for Devin Townsend in both the Devin Townsend Project (as of 2009) and the now-defunct Devin Townsend Band (2002-2007). RVP has also played drums for the experimental metal band Terror Syndrome and the progressive rock act Ten Ways, among others.

His most recent band is the new hard rock/metal act IMONOLITH, which he officially started in 2018 with his fellow DTP bandmate Brian Waddell. Separate from his musical groups, RVP is also a professional live and studio session drummer and teaches drum lessons privately in Vancouver, BC, as well as online when on tour.

IMONOLITH released their debut album ‘State of Being‘ in March 2020, with tours set to support that album… right on the cusp of the world closing down. Let’s see what RVP has going on, as he’s here to be our nineteenth piece in the Gear Assembly! Rock on…

I was 10 years old and started drumming because I was influenced by my father who was a musician in a cover band. I’d always jump up on stage after his sound-checks and mess around on the drums.

My father asked me if I would like to start drumming, and that’s when it all began for me. I never looked back.

At the time, my father was my biggest reason and influence to start drumming. it inspired me watching him perform with his band in front of people.

I’d say “The Reign“. The reason why is it shows my technical ability, feel, groove and creativity all in one song.

I think it’s important to be versatile and always play for the song. If you can include cool parts that compliment a song, you’re winning!

Nope. I use all the same gear in the studio as I do live.

I like there being a seamless transition from studio to live when it comes to my gear and the sounds I have access to.

Just me and a practice pad and the floor beneath me.

I really enjoy taking the hardest parts of a set and changing them into rudiments as a warm up. This gets me prepared for the upcoming songs in the set and also gets me loosened up for playing live.

I’ll sometimes change up my drum fills or maybe play ambidextrously to make things a little more exciting or challenging.

I’m a big fan of playing the song like the record, though. So, 99% of the time I stick to what I played on the album.

I love getting creative with cymbals in beats and fills. You can get so many cool sounds out of all the cymbals I have in my setup. I love to make things sound interesting while being able to groove!

I’d have to say it’s my Sonor Artist Bronze Snare Drums. That’s just my sound. The crack it gives off is incredible and it has a consistent beefy tone whether you tune it high, mid or low.

It’s the most versatile snare I’ve ever played! I have so many people compliment my snare sound in the studio and live. Proof is in the pudding there, haha.

I love health and fitness. It helps greatly with my mindfulness, happiness and obviously health.

It’s also a big factor in helping me play 2-3 hour long shows around the world. Being in shape and taking care of myself, allows me to perform at my best night after night on tour and in the studio.

When I feel good, I’m also more inspired and my creativity spikes. It’s a win/win having health and fitness in my life.

I really got into Avatar a couple years ago. They’re an amazing band and have interesting sounds, riffs and ideas in their music.

I wouldn’t say they’re a big influence on how Imonolith sounds, but they’re influential in an inspirational way.

Do what you love and love what you do!!!

Don’t follow trends. Be yourself. Be a first rate version of yourself not a 2nd rate version of someone else. Don’t give up, either. So many people talk the music biz down. It’s the people that give up that always fail 😉

At the same time be smart. Network, be versatile in your music and business dealings, don’t put all your eggs in one basket. Adapt and evolve with the industry.

Be willing to learn from others and if you make mistakes, stop and take time to learn from them. All these things will help you in being successful in the music industry. These are the things I did and I’m very happy where I am now.

COVID-19 hit us hard, like every other band in the industry.

Our (Imonolith) first headlining tour ever of Europe/UK was canceled. We lost money like hundreds of other bands did. It’s being rescheduled now. [New tour dates found here.]

It also hit my session work and drum teaching, as well. While all of this was happening, I looked at what I could do to change with the times and adapt. Online lessons have been a big saving grace for me. I’m still able to make an income and get through this.

As for the band, online communication with our supporters is absolutely key. If there’s a will, there’s a way, you just got to want to find it.

Not being cocky here, but I literally own my dream drum setup. Sonor SQ2 laid out with Sabian Cymbals, Evans Drumheads, and Regal Tip Sticks.

I endorse all these companies and a bunch more and couldn’t be happier. I’m definitely playing my dream setup and own all the gear I’ve dreamed of playing. Pretty damn grateful!