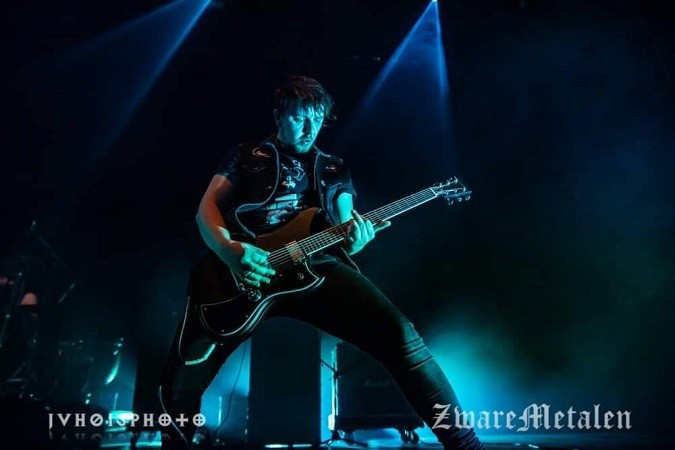 The U.K.’s TELEPATHY has grown by leaps and bounds since their debut EP ‘Fracture‘ was released in Summer 2011. Their first full-length ‘12 Areas‘ dropped in Spring 2014, followed by sophomore album ‘Tempest‘ in March 2017. Their third album ‘Burn Embrace‘ arrived in late March 2020, a beautiful instrumental blend of post-metal that dips its hands into blackened atmospheric sludge, but in any terms you wish to categorize it, it’s intriguing.

The band didn’t have much chance to tour in promotion of it, as they’re unfortunately on the same touring break as every other active band at the moment, but we’ll find all about what Richard is up to, as he’s here to be our fifteenth piece in the Gear Assembly! Rock on…

I remember being about 10 or 11 years old and listening to the soundtrack for the Dave Mirra BMX 2 videogame. It had a live version of Black Sabbath’s “Paranoid” by Ozzy Osbourne and I was OBSESSED with this track!

Following a school exam, my mother, who has always been super into music, took me to a record store and bought me the boxset of the first eight Black Sabbath albums.

Pretty soon after this, I started playing guitar, learning songs, and exploring every piece of heavy music I could get my hands on!

To be honest, I think every musician is still trying to write that piece of music, it’s kind of an eternal search, you know?

At the moment, the tracks of which I’m most proud of would either be “The Void in Aimless Flight” or “Sorrow Surrender Its Crown” on our new album ‘Burn Embrace‘. Both tracks are equal parts atmosphere, giant riffs and feature progressive song structures with an underlying melancholic and psychedelic nature.

Yeah, the band and our producer Gomez are always going off the deep end in the studio to come up with the best and most appropriate tones for the songs.

For example, on the new record there is a Marshall JCM800, Fender Twin Reverb, an old Simms Watts amplifier, and a bastardised pedalboard of both mine and our guitarist’s pedalboards.

If I remember correctly, we also used a Fender Baritone Jazzmaster for most of the rhythm tracks, an old semi acoustic Yamaha guitar, and a Hamer Superstrat.

Usually I’ll be hanging out at merch checking the the band before us and about halfway through that show, we’ll warm up together, stretch a bit and depending on the day, have a toast with our crew before going on stage.

As soon as we hear the intro tape rolling, we’ll get together behind the stage and then its game on.

Every show is usually slightly different in terms of the stage, venue, vibe from the audience or any number of other factors, so it’s usually pretty easy to keep yourself fresh and ready to play!

It’s always nice to have mid-tour festivals to change up the set and play at a different time of day and meet some friends.

I’m not sure about a personal signature sound, I guess that would be for others to judge, but I can say for sure give you a moment from my youth that made me take a new approach to writing riffs.

This was learning to play tracks by a few bands like Melvins, Soundgarden, and At the Drive-In and falling in love with these odd timed, but still monolithically heavy riffs that created an immense atmosphere.

I’m thinking specifically of “4th of July” by Soundgarden, “Hag Me” and “The Bit” by Melvins, and pretty much any track from ‘Relationship of Command‘ from At the Drive-In.

I don’t have any sponsors, but I will give a shout-out to Dunable Guitars, who make some of the finest guitars going and whose Yeti model I now couldn’t live without!

Right now, aside from my guitar, it would have to be the Friedman BE-OD Deluxe pedal.

It took me a while to find a pedal capable of recreating the tone of the modded JCM800 we used on record, and this pedal does just that, and also has a second channel for a lovely “Marshall with guitar volume down” crunch.

One important thing for me that influences the writing for Telepathy is checking out films and their associated soundtracks.

Sure, there are a bunch! These are not particularly emerging artists, but here are some I’ve been really into recently
Oranssi Pazuzu
Mamiffer
Peter Haden/PH
Terzij De Horde
GOLD

Just follow your heart and create what you want to hear! Ignore any trends see coming along and just play for yourself!

Well, the band had to cancel our record release tour in the UK, so that has limited the amount of promo we could do for the release of the album on March 27th.

Aside from that, this pandemic has sent shockwaves across the whole industry, and had thrown into jeopardy a bunch of Summer dates we had coming up, as well as packing venues’ schedules full of rescheduled dates in the Autumn.

I must say that it’s not just bands in the entertainment industry that are suffering, there are booking agents, road crews, venues and their staff who have been diligently slaving away behind the scenes and also had their lives turned upside down.

Oh, pretty much the one I have is serving me really well, but I would love to add a Fender Twin Reverb Silverface for an A/B clean channel. Working on it, though!