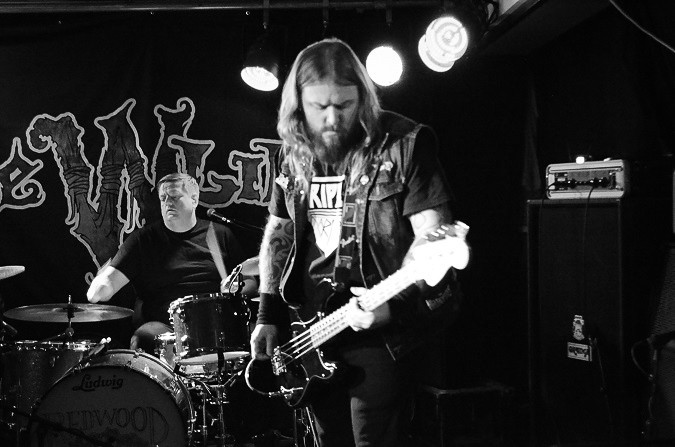 Norway’s THE W LIKES has had a few starts and stops since releasing their ‘Into The Within‘ demo in January 2013. Some lineup changes here and there, then a second release, ‘This Time‘, with the new crew in October 2015. Once solidified, they re-recorded the songs from that second EP to include with the new tracks on their debut full-length ‘The W Likes‘ in June 2017, released through Rampah Records.

Their most recent was a 2019 split LP release, ‘Chapter X‘, which is the final record in the Ripple Music ‘Second Coming Of Heavy‘ series. THE W LIKES bassist Lars-Erik Skogly is here today as our sixteenth piece in the Gear Assembly! Rock on…

Most important of all is my Fender Precision with DiMarzio Model P pickups and Elixir strings.

On my pedal board, I use Boss Chromatic tuner, 2x Ampeg SCR-DI, a Norwegian distortion pedal called Grombass (Onkart Gromt) and currently on my second ABY pedal (do not have any brand loyalty to that one yet… as long as it works).

I was 13 and I didn’t like playing guitar. I got guitar lessons for the previous X-mas, but I couldn’t get into it.

My influence, at that time, to pick up the bass was actually Duff McKagan. I still like Guns N’ Roses more than Metallica. Take that Rollsløkka elementary school, with your preferences to the latter, haha.

“This Time” a song we released as a digital single and later re-recorded for our debut album.

Willy (guitarist and vocalist) started playing a somewhat laid back riff that Erik, our previous drummer, had started playing something fast over it – and I jumped on it with the riff that, to this day, is exactly how I played it the first time… only less sloppy.

I demanded to write the lyrics by myself (Willy and I usually collaborate on most of it). So this kinda laid back song ended up being a burst of energy that I absolutely love to play.

The last three recording sessions we have done were in a small studio, in our hometown Hamar, Memphis Bound Studio.

I use everything except my cabinets in there and it seems to work out great.

Just the nerves kicking in. If they don’t kick in, the gig usually is crap from my part. Nerves go away after one or two songs and then it’s all good.

It’s mostly been weekend gigs, so I still dream of going out on that long tour and try not to kill each other.

We never get enough stage time, so we have to change the set lists so we get to play them all.

When I feel the rumble from my cabinets, I fall into the groove with the other guys and can’t give a damn about anything else in the world. Just playing our hearts out.

I still have my first Fender Precision – three in total. I’ve been up to five.

I’ve had a couple of other basses, but it never works out. I’m loyal to my Fenders. I love my Ampegs and EBS amps, and dream of adding an Orange stack into the mix. No current sponsorships or my own signature gear.

My Fender, it’s a love story.

My girlfriend and I bought a house up in the hills, with very few neighbours, two years ago. I enjoy the quiet, surrounded with forest, walking the dog, and the occasional visit from elk in our backyard.

Taking care of the house and the upcoming building of a rehearsal room /studio gives a lot of peace of mind for what’s to come. That transfers into more creativity.

Yes, as all good music does. I am first of all a music fan. It kinda feels that Majestic Mountain Records could just go ahead and give me a subscription to their roster.

Got the new Hypnagogics and I absolutely love it. Need to give a mental pint to Andy from The King’s Pistol for some resent bass pureness.

Also fellow Norwegians in Saint Karloff and Captain Caravan for their releases, that goes to show there is still hope for great music in the future.

Play what you love and play as much you can.

Riff Relevant:  How has the virus pandemic impacted your music life or career? What are some ways you’ve been doing things differently? (Note: some of the answers may be from several weeks ago.)

It’s been some crazy days at work. I’m now on temporary leave, so I’ve tried to catch up with some sleep. And as I typed that, I was called back for tomorrow. Crazy days indeed…

Music-wise, it will be hard hard, since we were banned from crossing county lines unless you’re working. We are trying to write music and sending each other ideas. But now it might be crazy work hours again for me.

The one I have, plus an Orange stack and more Fender Precisions… loads more. Also might be an idea to have some wireless system, haha.