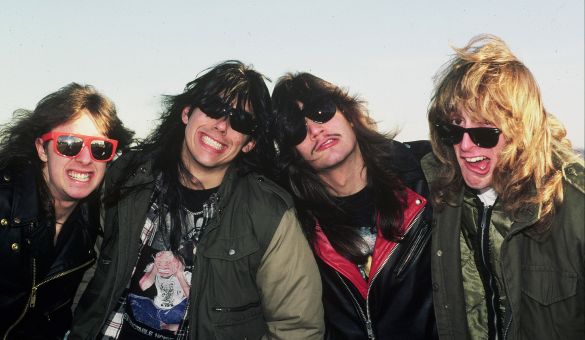 The origins of one of the East Coast’s most aggressive, volatile (and totally underappreciated) thrash bands, Bridgeport, CT.’s Indestructible Noise Command date back to at least 1985.

This was when guitarist Erik Barath and bassist Dennis Gergely, both fed up and sickened with the state of music at that time, decided to start a band that harnessed the aggressive, violent, and vicious energy they felt was lacking in most music. The duo selected a most fitting name, one that was explicitly clear in their mission statement, Indestructible Noise Command. Soon they were joined by guitarist Anthony Fabrizi and drummer Gary Duguay and got underway writing some songs.

Before ’86 was over, I.N.C. had recorded a Demo tape and were booking respectable shows, supporting the likes of acts like Exodus, Megadeth, and King Diamond. Less than a year later, and only six months after the guys graduated high school, I.N.C. signed with Giant Records. 1987 found the band releasing their full-length début record ‘Razorback’ for the label. The record was a mind-blowing bombardment of blistering thrash and speed metal with quirky overtones that absolutely floored both critics and fans alike.

Indestructible Noise Command‘s members were on their way, so to speak, but no one could foresee the recorded masterpiece that was soon coming. The quartet quickly regrouped and recorded their sophomore album, once again for Giant Records. That would be the landmark milestone that is ‘The Visitor’, a massively monstrous outing possessing razor-edged, raging guitar riffs, rapid-fire drumming, and the peculiar vocals and lyrical themes that only Gergely could provide.

These two albums with their unique musical styling, along with I.N.C.‘s outrageous, over-the-top live displays, made the band a favorite with fans and the music press alike. Bands like Pantera were soon opening for them and everything seemed on track for Indestructible Noise Command to be the next big breakout from the upper East Coast. Unfortunately, things can change in a seeming instant, and soon financing and promotional support from Giant Records waned. Evermore and more disillusioned with the music scene in general, I.N.C. opted to go on hiatus.

That stepping away in 1988 was expected to be a temporary thing, a reassessment with an eventual planned return when I.N.C. was able to call their own shots. Little did anyone know that it would last over two decades, as it would be 2010 before a revamped, but no less determined, Indestructible Noise Command would blast back onto the metal scene.

That was the year that I.N.C., still consisting of Barath, Gergely, and Fabrizi, now joined by drummer Dennis Leeflang and bassist Samuel J. Roon (freeing up Gergely to focus solely on singing) independently released their ‘Bleed The Line’ EP on their own label, M90 Records. Produced by the famous Fredrik Nordström (At The Gates, In Flames, Opeth), hype prior to the EP’s release exploded, as I.N.C. was added to stations around the world, including the great KNAC in Los Angeles, WREK Atlanta, WRBC, WLFM, and WEOS in New York, as well as the syndicated European FM metal show, The Metal Abbey. In its first week, the ‘Bleed The Line’ EP debuted at #4 Most Added on the CMJ Loud Rock charts, entering the charts at #12, which is rare for an offering other than a full-length LP. All of which goes to show the cult following and legendary status the band had achieved by that time.

I.N.C. soon signed with the UK-based Rising Records, Fredrik Nordström returned, and the band recorded and then released ‘Heaven Sent… Hellbound’ in 2011. It, like the preceding EP, showcased the band’s still-aggressive nature but also revealed how time had tempered the band and its overall songwriting. More melodic moments and a noticeable change in the vocals all worked to I.N.C.s advantage in making them as relevant now as they had been in the late 1980s.

That fact was doubled down on and further bolstered by the band’s 2014 full-length record for Ferocious Records, ‘Black Hearse Serenade’. I.N.C. had undergone another change in its rhythm section for this album, now joined by drummer Kyle Shepard and bassist David Campo. But the usual expectations from anything crafted by this band were as present as ever, meaning another searing salvo of intense thrash, infectious hooks, and the always-intriguing lyrical themes covering a wide array of subject matters. That has always been something that Indestructible Noise Command excelled at right from their start – creating music for themselves that’s chock full of ferocity and individualism.