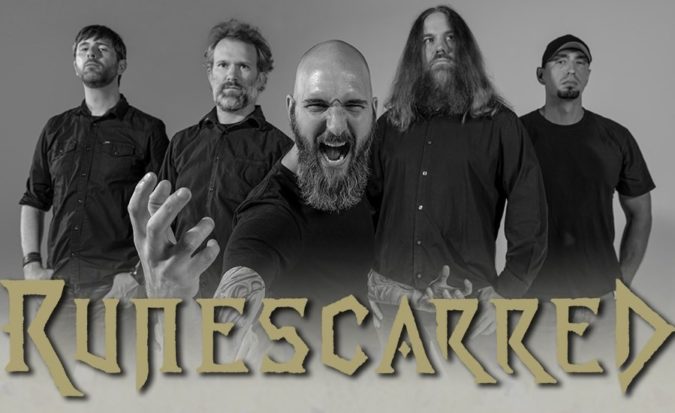 The 10-song tour de force is set to arrive February 21st, 2020, from TLG Entertainment and excitement is rising. Formed in 2017, out of the ashes of The Lone Star State’s thrashers Dead Earth Politics, RUNESCARRED became the immediate priority of vocalist Ven Scott and guitarist Tim Driscoll. Eventually, the pair aligned with Skunk Manhattan (guitar), Josh Robbins (bass), and Payton Holekamp (drums), releasing the critically acclaimed ‘We Are‘ EP in 2018 [review].

Drawing notice from music-oriented outlets, the EP propelled RUNESCARRED onto the map, while sparking anticipation for further audio output. With momentum continuing to build all the while, metal-loving masses everywhere are ready and set for the arrival of ‘The Distant Infinite‘. Recently, guitarist Tim Driscoll revealed the following insight into the album itself, saying:

“The title for “The Distant Infinite” came to me while thinking about striving for perfection, knowing you cannot attain it, but forging ahead nonetheless, which is a perfect portrait of the album itself. This record has dusty boots from its various stylistic travels as well as the hard-won wisdom gained from having more than a few miles on life’s odometer. I am immensely proud of this album as well as everyone involved in its creation and cannot wait for everyone to hear it!“

Two singles have now been served from the album, “Inviting Rivers” (official video) and the newly delivered “Mammoth” lyric video are fierce salvos of forward-thinking, melodically enhanced modern-day metal. Each capably reaches soaring heights where the collective strengths of RUNESCARRED are on full display within the pair of tracks’ shared allure and overpowering supremacy. Both are presented below.

The new RUNESCARRED album ‘The Distant Infinite‘ is set to be released on February 21st from TLG Entertainment. The band will mark the album’s hotly awaited release with a show at Kick Butt Café in their hometown of Austin, Texas the same day of the CD’s arrival. Find the information for this show and other upcoming RUNESCARRED live appearances listed below.