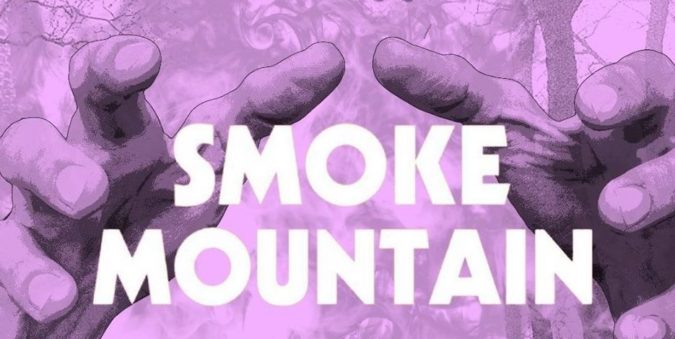 It has been a full year and one half since we learned the news of Argonauta Records signing Tallahassee, Florida’s trio of finely fuzzed-out doom, SMOKE MOUNTAIN.

Things have been a bit quiet from the band’s camp since that time, something we might attribute to their perhaps preparing a music release for the Italian record label. Well, let’s say that is exactly what the familial heavyweights from The Sunshine State have been doing and they are now ready to reveal the official details of said release. Yes, wedded vocalist Sarah Pitt and guitarist Lee Pitt, and drummer Brian Pitt, (Lee’s brother), better known collectively as SMOKE MOUNTAIN, announce their full-length studio début.

‘Queen Of Sin‘ is set to arrive March 27th, 2020, from Argonauta Records, and anticipation for the album is increasing unabated. The long-playing record is the follow-up to 2017’s self-titled EP offering from SMOKE MOUNTAIN, reviewed [HERE]. Along with details of the album including the artwork and tracklist of this upcoming release, we are also sharing the first single to be delivered, “I Walk Alone“.

The band brings us up to speed, saying:

“Queen of Sin is our first full-length release. It picks up where our debut EP left off, with tracks ranging from 70s-influenced stoner fuzz to slow and crushing modern doom. We even tossed a post-apocalyptic biker track on there just to mix things up. This album has something for everyone.”

“The song I Walk Alone is a bit of a departure for us. After I came up with the initial riff and melody, I set it aside because I wasn’t sure it would work for Smoke Mountain. But after I showed it to Sarah and Brian, they loved it and insisted we use it. It’s intense and melodic, and it really highlights Sarah’s voice. We’re very happy with the way it turned out and are excited for people to hear it.”

Though a seemingly minimalist affair on the surface, “I Walk Alone” yields a harrowingly striking listening experience in full. With its sedate, tranquil start of slower paced music complimenting Sarah’s raspy yet airy vocals, underlying turbulence begins to build and gain beneath. As the intensity accumulates within the deeper recesses of the track, it soon overflows with a morose thickness in the combined output of guitar, drums, and voice.

The upcoming SMOKE MOUNTAIN studio album, ‘Queen Of Sin‘, is available on CD, vinyl, and digital formats from Argonauta Records. It will arrive March 27th and is available to pre-order now at this [LINK].