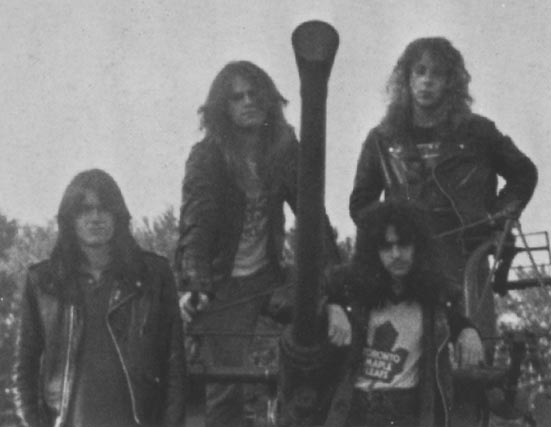 In the early to middle Nineteen-Eighties, Toronto, Ontario, Canada was not unlike most any other well-populated place found upon the North American continent.

Every urban sprawl, even a few rural locales, had some degree of a music scene taking place. Some of these were well underway, populated with area-specific bands and artists all vying for status and a place at the table. In 1984, Toronto was not any different, no, for that determination was more oriented toward the type of music that had begun to captivate the youth. Of course, I am talking about heavy metal, to be more precise, thrash metal.

Sacrifice and Slaughter were both active at that time and were just getting started themselves. They were soon joined by a new arrival, LETHAL PRESENCE. The five-member band consisted of vocalist Jeff McLaughlin, bassist Steve Bills, drummer Craig Boyle, and guitarists Bobby Sadzak and Andrew Brown. The quintet spent their first year or so writing some songs, playing some live shows, partying, and thrashing like maniacs.

Their guitar-fueled frenzy is part thrash, part speed metal, and all-out intensity with barked vocals. 1987 saw LETHAL PRESENCE included on the now-infamous ‘Raging Death‘ compilation from Godly Records, alongside Sadus, Betrayel (not a typo), Xecutioner (pre-Obituary), and R.A.V.A.G.E. (pre-Atheist). The record became an underground introduction to these pioneering bands; it was followed-up with a demo type release later that same year.

‘Unholy Alliance‘ is a 7-song, cassette-only demo, released with label backing from Diabolic Force. It featured a change in the drumming department of LETHAL PRESENCE, behind the kit was Noah Joseph. He did not have much time to acclimate to the band, for it was all over the following year in 1988. Much like their take on heavy metal, LETHAL PRESENCE hit hard and hit fast… coming and going in a short period, much like their frenzied songs.

After the official demise of LETHAL PRESENCE in 1988, Bobby Sadzak went on with stints playing with Slaughter, Inner Thought, and Strappado.

In 2016, the ‘Unholy Alliance‘ demo received a limited vinyl reissue from Ripping Storm Records. The LP was mastered from the original tape and included four never-before-heard tracks from 1985/1986; one of which features Rick Nemes from Infernal Majesty and Rapid Tears on drums.