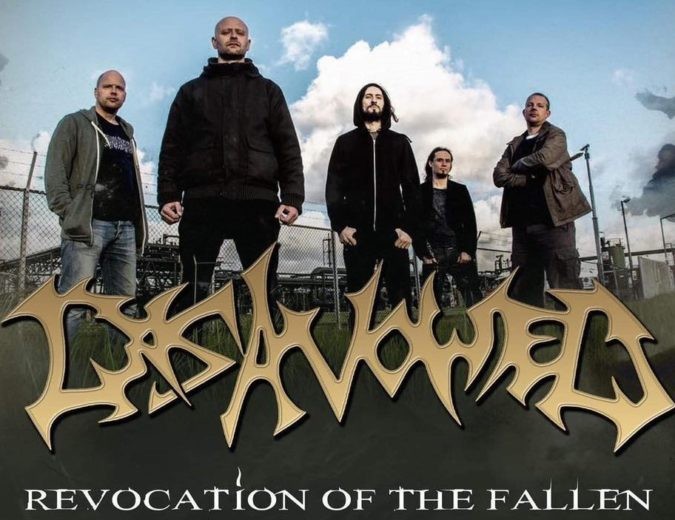 Class is now in session but today, we won’t be going so far back as some of our recent #OSS spotlights have visited, but still, far enough to satisfy the criteria.

We find ourselves in The Netherlands, Amsterdam to be specific, and just a mere two decades ago. The year was 2000 and as one death metal band comes to an end, another death metal band is born and brought forward. The one coming to its cessation was Nocturnal Silence, active for six years, during which time they released three demos. For whatever reasons, they felt as if they needed a fresh start, a clean slate if you will. You know, the new millennium, a new sonic vehicle for taking crushing music brutality to the masses and all that.

Early 2000 saw vocalist Robbert Kok, guitarist Gerben van der Bij, bassist Nils Berndsen, guitarist/ vocalist Joel Sta, and drummer Robbert Vrijenhoek reemerge as DISAVOWED. Almost immediately, the quintet independently released the 3-song ‘Point Of Few‘ demo and what it contained was nothing short of impressive. Remember, these were not some newbie amateurs, they were experienced players, ones that were used to playing together. This shows too, revealed upon this demo’s material, the sort heavily influenced by bands like Suffocation, Broken Hope, and Malevolent Creation.

The demo caught the interest of the American label Unique Leader Records who soon signed DISAVOWED and in 2001, the first record for the label arrived. ‘Perceptive Deception‘ was recorded as a four-piece, without Joel Sta, yet reception to the album was mostly positive. The release was followed by a 5-week tour in the United States and Canada in 2002, and a 4-week European tour in 2003. Things were going good for DISAVOWED but as we know all too well, such things never last, and in 2004, the band was sidelined.

Drummer Robbert Vrijenhoek had been dealing with wrist injuries for a rather lengthy period of time and could no longer continue doing so. The band had scheduled commitments and would eventually take in Despondency’s Dirk Janssen as their drummer on a temporary basis. DISAVOWED played numerous regional shows to warm up before heading to Japan and Hong Kong on tour in April 2006. Once they did return home, the band eventually named Romain Goulon (Aggressor, Arsebreed) as their permanent drummer.

After the summer of 2007 was spent playing festivals, DISAVOWED returned to the studio, where they recorded their sophomore album. Before the end of the year, they released ‘Stagnated Existence’ for a new label, Neurotic Records, and undertook a 5-week European tour with Cannibal Corpse to promote it. By the middle of 2008, old problems arose once again as drummer Romain Goulon exited the band, with Kevin Foley eventually named as his replacement.

Though DISAVOWED never broke up or announced a band hiatus, they entered a state of semi-inactivity when it came to recording any new albums. They would remain “studio free” for well over a decade and then, in 2017, new drummer Septimiu Hărşan (CodeRed, ex-Pestilence) joined the band. Three more years passed and 2020 arrived, and with it, news of the long-awaited third studio album from DISAVOWED.

The label Brutal Mind will release the new, full-length DISAVOWED album, ‘Revocation Of The Fallen‘ on July 31st, 2020. Today, we are revealing the Jorg de Vos-created cover artwork, tracklist, and sharing the first new single from DISAVOWED in 13 years, “The Enlightened One“, via the lyric video below.

This is most definitely where the “old-school” part of today’s segment is applicable for DISAVOWED epitomize every aspect of the word. With their traditional style savagery and non-stop death metal body blows, the band is back to reclaim what is rightfully theirs: global recognition and respect (so give it up).

DISAVOWED ‘Revocation Of The Fallen‘ is available to pre-order now at the following locations:

01. The Process Of Comprehension
02. The Enlightened One
03. Revocation Of The Fallen
04. Imposed Afterlife
05. Deformed Construct
06. Therapeutic Dissonance
07. Defractured In Contemplation
08. Egocentric Entity
09. The Inevitable Outcome
10. Facing The Singularity