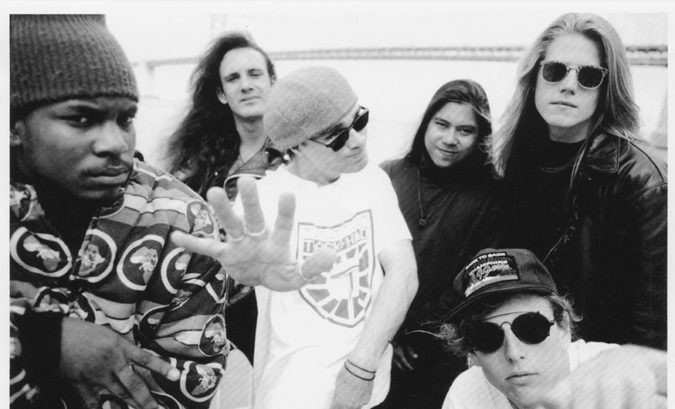 We find ourselves in the San Francisco Bay Area this week; years before Aerosmith and Run-D.M.C. collaborated to rework the hit song “Walk This Way“.

It was 1984, years before that formula worked for Anthrax and Pubic Enemy, or rapper Iced T tried his hand at metal with Body Count. Bands like Rage Against The Machine, Limp Bizkit, Linkin Park, or Stuck Mojo did not even exist in 1984. I’ll tell you who did exist and how they were pioneers responsible for spearheading a movement that became known by a variety of tags: rap metal, crossover, nu-metal, contemporary funk fusion, and a dozen others.

I am referring to MORDRED, and as the myriad tales told about the literary character whose name they bear, numerous players came and went early on in the band. Prior to recordings, the earliest incarnation of MORDRED apparently consisted of founders Art Liboon (bass) and Alex Gerould (guitar), with drummer Slade Anderson, vocalist Stephen Shaw Scates (aka “Steve Skates“), and guitarist Josh Juska. This would be a short-lived version of the band, as during their first year or two they had a revolving line-up, but in February of 1986, MORDRED played their first show with Possessed and Legacy (pre-Testament).

Things began to fall into place and settled as they searched out their own sound amid a growing sea of rock and metal bands. Part of things fell into place as the band saw more new members joining: drummer Erik Lannon and guitarist Jim Sanguinetti (who replaced Sven Soderland, who replaced Josh Juska). When Liboon, Gerould, and Skates rounded things out, MORDRED recorded their first multi-track recording, the ‘Arachne Demo.’ This was followed by two more in 1986, ‘Demo I‘ and the ‘Rehearsal‘ demo. The quintet was primarily a straightforward thrash metal band at the time; they played tight, fast, and aggressive songs full of timing and tempo changes.

MORDRED was making major waves, but they soon questioned their ability to stay on course. Gerould let Jim Sanguinetti go, he felt that he didn’t adhere to the band’s “signature” sound. Okay, the band could survive this, right? They had replaced guitarists umpteen times, but then the big hit came (and not in a good way), as Steve Skates skated off to join the Army. Steve had been a unique stand-out within the Bay Area thrash metal scene, a banshee that sounded like a cross between Steve “Zetro” Souza and Udo Dirkschneider.

The audition process is something MORDRED could do in their sleep and so it began anew, the oft-times frustrating search for a singer. Not just any singer mind you, but one with their own vocal identity and presence. Enter Scott Holderby, who made an immediate impression upon the others, and who Art Liboon summed up in a 2016 No Echo interview like this: “Scott reminded me of a metal kid who had a sort of high snarl roll, which vaguely reminded me of a kind of metal-evolved, Johnny Rotten-ish, TV baby product of the ’80s, Volkswagen dune buggy hooligan from some other county. I was sold, and the others agreed, so we began rehearsals with Scott.“

There was still hope for MORDRED, as that latest version of the band, including Jim Sanguinetti’s replacement – Mercenary guitarist Danny White, recorded 1987’s ‘Demo II‘. Then it was just like old times, as founding guitarist Alex Gerould cited he has decided to attend law school and was the next in line to announce his departure. Soon, Erik Lannon purportedly began to not show at practices, but’s let’s face it, MORDRED knew how to find players and thus Gannon Hall became their drummer. MORDRED was up and running again and stayed with a single guitar line up. They played more live shows as new members Holderby and Hall assimilated their own influences into the mix.

The band was a well-known fixture within the Bay Area music scene by that time, but it was another band that everyone went gaga for, including MORDRED. MCM And The Monster were a party band, a “bad kids playing bad music” band that melded rock, funk, punk, and pop together, along with a then-burgeoning new style of rap music. MCM A.T.M. had a member in their line-up not commonly seen on metal stages at that time, he was a DJ, Aaron “Pause” Vaughan. Art was introduced to Aaron and they hit it off over conversations about music, while guitarist Jim Taffer joined MORDRED and Danny White became the guitarist for both bands.

Back to a two-guitar line-up, Liboon had a knack for goofing around and played the Rick James mega-hit “Superfreak” at practices. The band decided to arrange it and began to play it live, where it went over great with fans. Record labels increased their scouting of MORDRED and Karl Walterbach of Noise Records heard their ‘Demo II.‘ He wanted to hear more of this “Super Freak metal music,” so he commissioned a demo of new material. Simultaneously, MCM And The Monster were imploding, so our subjects asked Aaron “Pause” Vaughan to accompany them on the new demo, and he did. 1989’s ‘Noise Demo‘ was the clincher, it was quite different from anything else happening then, so the label signed MORDRED, helped in no small part by the presence of DJ Pause.

That same year, MORDRED recorded and released their studio album debut, ‘Fool’s Game‘, and a new musical genre was born. Packed with metallic aggression in the form of razor-sharp guitar riffs, deep rhythmic grooves, and juggernaut drums, the record resonated well with fans. This was helped by the band’s official video to the feel-good song “Every Day’s A Holiday“, a song written in the studio while recording and it was well-played on MTV’s Headbanger’s Ball. U.S. tours, supporting Nuclear Assault and then Overkill, garnered good exposure, as did follow-up tours in the UK and Europe, where they played in Eindhoven, Holland at the 1990 Dynamo Festival. That MORDRED set is still talked about to this day, with people referring to that year’s festival as the “Blue Dynamo,” due to Scott Holderby‘s performance while painted blue.

When MORDRED returned with their sophomore album, 1991’s ‘In This Life‘, they seemed an altogether different band. One of them was: guitarist Jim Sanguinetti was back, having replaced Jim Taffer, but those differences were more than just one man’s replacement. The songwriting had quite evolved, it was darker and heavier, but there were also very funk-driven undercurrents. On top of these noticeable aspects, the turntables and interjections from DJ Pause were increased and dynamic in their contrast to the music.

The album produced two hit singles, “Falling Away” and “Esse Quam Videri,” and videos for each enjoyed heavy rotation on MTV and world outlets. The band toured heavily in support of ‘In This Life,‘ with a headline leg that included a sold-out, two-night stand at the Marquee Club in London. Those nights were recorded and filmed, then used to produce the MORDRED home video, ‘In This Live.‘ It was around that period that I saw them live, with Mucky Pup, in Washington, D.C..

In 1992, MORDRED released what many considered their most experimental offering, the ‘Vision‘ EP; one that found the band had expanded their musical horizons. This 5-song short player was a bittersweet item for fans, as musical differences and “visions” for the band lead to the departure of singer Scott Holderby in 1993. The band again found themselves minus an integral piece to their sound, but they were undaunted and quickly regrouped with vocalist Paul Kimball (A.M.Q.A., Wax Moon) on the mic. Kimball’s vocals were a change in that they were grittier, but having been in several Seattle bands prior, he brought aspects reminiscent of that region’s great singers to this new gig.

‘The Next Room‘ was the third MORDRED studio full-length album, released through Noise Records in 1994. Despite it being yet another fantastic outing for the band, it seemed the tides had turned and possibly not in their favor. Gannon Hall had taken over as the manager of MORDRED and through no fault of his, cracks began to appear. Noise Records provided little promotion for ‘The Next Room,‘ nor a tour in Germany, a place MORDRED had a strong fanbase. It sold no advance tickets. Tension grew between Gannon and Karl Walterbach from Noise and when the label pulled the plug on the tour, MORDRED undertook the ultimate act of sacrifice… and disbanded in 1995.

A reunion took place in 2001, the band played sporadic live shows up until 2007. From that point, they either went on a hiatus or broke up a second time, as things were silent again for several years. Then in 2013, MORDRED came back to life with a fiery passion, their lineup included five of the original ‘In This Life‘ / ‘Vision‘ era members, minus drummer Gannon Hall, who was replaced by Jeff Gomes (Fungo Mungo). Subsequent reunion tours took place in 2014 and 2015, which culminated in an explosive appearance at the U.K.’s Bloodstock 2015 festival – where a new song, “The Baroness“, was played and the band shared plans of recording a new album.

This past week, those plans manifested into reality, as MORDRED released their first record of new music featuring singer Scott Holderby in 27 years. The 4-song ‘Volition‘ EP is out now and is everything any longtime fan of the band would expect it to be. Their signature, hard-edged metal discharges offset by turntables, scratching, and now-denser vocals, are modern and in no way sound dated or tired. If you’ve never heard of MORDRED, then here is your chance to discover an outside-the-box trailblazer that pioneered a sound and style all its own.