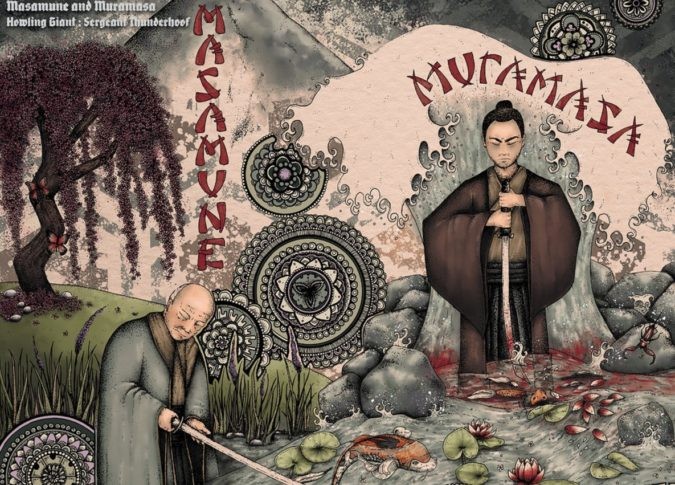 For the second offering in their ‘Turned To Stone‘ split 12″ series, Ripple Music pair two of the underground’s more unique music-making entities.

From Bath, United Kingdom comes the purveyors of headily halcyonic rock heaviness, SERGEANT THUNDERHOOF, and opposite them, Nashville, Tennessee’s cosmic powered, progressive space metal trio, HOWLING GIANT. The connecting of this duo of fan-favorites does not cease with their inclusion on this recording, to be certain. The bands deliver two interconnected 20-minute tracks, telling the story of and face-off between legendary Japanese swordsmiths, Muramasa and Masamune.

Foregoing the routine approach to most split releases, where each band provides a stand-alone song; here our contributors went the extra mile… and then some. What resulted is an aurally-intermingled, thematically cohesive work of sonic artistry. An ambitious, twofold exploration of the Japanese legend about the two greatest Katana sword makers, one well-rooted in historical relevance to the country’s culture itself.

The ambitious quest on the parts of these two bands is nowhere near finished, with SERGEANT THUNDERHOOF now unveiling an epic visualizer to accompany their track. Clocking in at over 21-minutes, the Jon Birch-created animated video is a stunning enhancement to their track “Muramasa” (named after Sengo Muramasa). It is the perfect vehicle for SERGEANT THUNDERHOOF – guitarist Mark Sayer, vocalist Dan Flitcroft, bassist Jim Camp, and drummer Darren Ashman – to display their talents and song-crafting prowess. They offered the following about this astounding project, saying:

“I don’t think we realized what an undertaking it would be to write and record a continuous 20 minute epic. We were a little apprehensive at what the response would be from Howling Giant and Todd and Jadd at Ripple. Luckily for us, everyone seemed to love it and a short time later, Howling Giant submitted their half which was a revelation. I have to say that the final product is something I’m really proud of. I really do see this as a fully realized concept LP rather than just a split release. I’m proud of what both bands have done and I hope other people find it as rewarding as we did.“

With a type of dualism at the center of making this record work, the astral audiophiles HOWLING GIANT – guitarist / vocalist Tom Polzine, drummer / vocalist Zach Wheeler, and bassist / vocalist Sebastian Baltes – also rose to the challenge. For the nearly 20-minute long “Masamune” (named after Gorou Nyuudo Masamune), the three reveal a progressive metal side only hinted at on their previous releases.

They, too, commented on their participation in this project, offering:

“We were so stoked to do the split with Sergeant Thunderhoof. After talking with those guys we both agreed that we wanted to do something a little different. Instead of the typical approach, where two bands each record a side of a record and the music remains completely independent, we wanted to create a record that feels like one complete thought performed by two bands, rather than two mini albums crammed onto a shared vinyl record. We decided to tell the story of two legendary Japanese sword smiths, Muramasa and Masamune, in which these they have a contest to determine who the superior swordsmith is. They each crafted a blade of masterwork quality and held their contest at the rivers edge. We thought it would be cool to each record a 20-minute song telling the tale from our chosen swordsmiths perspective. We then shared melodic ideas with the dudes in Sergeant Thunderhoof to insure a cohesive flow throughout the entirety of the record.“

Check out the spectacular mini-film for the song “Muramasa“, from SERGEANT THUNDERHOOF, below. Also included are the split album’s artwork designed by Jane Swettenham, and “The Forge“, an excerpt from the HOWLING GIANT track, “Masamune“.

‘Turned To Stone Chapter II: Masamune & Muramasa‘ will be issued on August 7th via Ripple Music, and is available to pre-order on:

Pre-order at these location-specific links:

For this release, Ripple Music will donate 10% of digital sales to UNCF, an American association empowering more than 60,000 Black students to attend college each year.

Howling Giant will donate 50% of proceeds from their latest round of T-shirts towards Gideon’s Army in Nashville, Tennessee, whose mission statement is to act collectively, boldly, and strategically as a unified force for the empowerment of children and their advocacy.