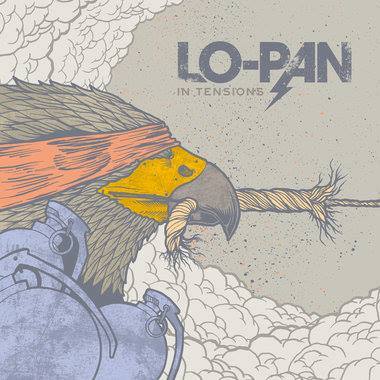 LO-PAN’s recent EP ‘In Tensions‘ (a wonderfully devious title), released on January 13th of this year through Aqualamb Records, takes you on two heavy journeys.

Each song brings you along a path of retrospection, insight, and growth, with one journey toward acceptance of where you are now, as well as a second to where you head in the future. Jeff Martin’s vocals and the music from Jesse Bartz (drums), Skot Thompson (bass), and Chris Thompson (guitar*) steadily shove you forward whether you had any ‘intentions’ to evolve with them or not.

The ‘In Tensions‘ EP is a convincing, assertive release of heavy, melodic, hard rock. This is what heavy rock sounds like, with every note it heaves at you. Did I mention it’s heavy? Well, it’s pretty damned heavy. LO-PAN has been thrown into the stoner rock category a long time, but that genre doesn’t truly define their sound.

I don’t want to get high and listen to this EP; I’m high *from* listening to this EP. The music starts off kicking hard with vocals spiraling in and quickly climbs to the sky and rarely drops. The first three songs, “Go West,” “Sink Or Swim,” and “Long Live The King” are all solid and relentlessly hard-kicking. “Alexis” slows you down to let you breathe… for about seventeen seconds. The last song “Pathfinder” is a proper finale in its near six and one-half minutes.  LO-PAN is collectively on point, with impeccable timing, and obviously, work well together in the studio.

The mixing may deceptively seem focused on the vocals, as Jeff’s voice is powerfully dominant and crystal clear. However, there’s a rolling cadence with the music and the vocal arrangements. It’s not a favored emphasis on the vocals in the mastering, it’s simply that the music and vocals are intuitively entwined, and rather impressively at that. The guitar work is complementary to the vocals, the bass is unwavering, the drums bring you to each new level of sound. Rather than competing against, they all work with one another.

It’s uncommon that I listen to a record and instantly get chills. This frisson happens often enough, as I’m one of the lucky people to have a physical reaction to music. It typically occurs during certain vocal tones reached or a drum paradiddle, an amazing bass line… but only a part of a song. My first listen to ‘In Tensions‘ was odd in that I felt immediate and sustaining chills, from the crushing opening notes of “Go West,” straight through the final seconds of “Pathfinder.” They never wavered, it was slightly unnerving at first.

Each song on ‘In Tensions‘ is beautifully balanced, with a solid, central rhythmic tide. Much of this EP was written during tour dates, it could be the rhythm of the road underneath crept subconsciously into their writing, but it’s as if an ocean is always in the background. Jesse’s drums and Skot’s bass initially hammer you, then pull back to gather strength, allowing the guitar and vocals to guide direction. Then the tsunami wave thunders in and crushes all, yanking you under. Instead of destruction and devastation, I felt surprisingly revived, positively soaring at various points during each listen.

That deprivation ends in 2017, with their upcoming Spring tour supporting The Obsessed and Karma To Burn (tour poster with dates is below), as well as their appearance at The Maryland Doom Fest this coming June.

I could be calm and collected, saying ‘Oh yeah, man. Sure, that might be a cool thing.” However, I’m not cool. Never have I been less cool than now. Especially after listening to ‘In Tensions‘ for the better part of two months. I’m amped and barely containing a jittery twitch. I’m in love with this EP and will gladly scream it from every high cliff.