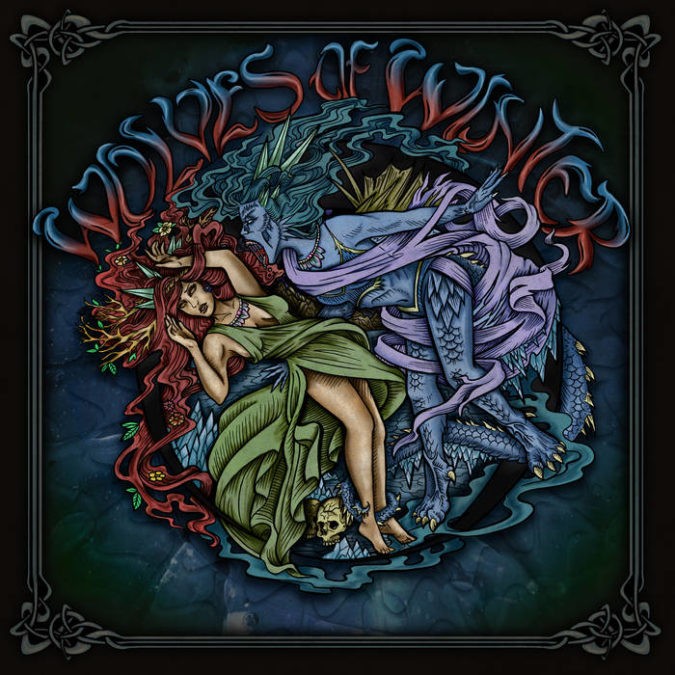 Phoenix, Arizona‘s heavy desert rock outfit Wolves of Winter came soaring out of the ashes in 2012. Comprised of Josh McGee (vocals and guitar), Mike Horn (drums), and David Weaver (bass), they are a whirling sand dune of fuzzy, down and dirty, heavy grit, grunge rock.  Guess what?  We have news!

The vinyl format of their first full-length release, the 2016 self-titled ‘Wolves Of Winter‘, which was announced for pre-order last year…  is in stock and open for orders via No Slip Records. After quite a delay due to some production issues with the artwork and pressing, all four vinyl variants are now available.

Any pre-orders made beforehand have been shipped out to any awaiting customers. We’ve heard that sales of the newly released vinyl are moving fast, so if you have procrastinated up until now, you may want to reconsider that…

This amazing cover artwork was created by Carrie Olaje, with the inner gatefold art done by David Paul Seymour. There are three limited variants, each 180g heavyweight vinyl and include a digital download card, as well as their own special features.

All variants (and a new David Seymour-designed T-shirt) are available via the No Slip Records storefront.

If you’re not a record collector like myself, in addition to the vinyl formats, ‘Wolves Of Winter’ is also available on Digipak CD, Cassette, and Digital Download via the band’s Bandcamp page.

More news! Josh McGee has divulged that the band is working on new music. As Josh had written most of the début material, this time around the band is taking their time to work collaboratively and craft what they feel could be their finest work for the follow-up, after such a well-received début full length.

There is no estimated time frame for completion, but the band is confident their fans will agree. Josh gave me a tease listen to one of the new songs, and even in its raw state, it was some pretty powerful sounds and may end up even more dynamic and hard-hitting than the début. We may see a single release, possibly recorded live, but none of this is confirmed as of yet.

Wolves Of Winter also has a couple of shows coming up next month in Arizona and Nevada, as they continue to expand beyond their locale to establish their presence in a larger region. Stay tuned!

Check below for the upcoming shows, have a listen to their self-titled album via Bandcamp stream, and watch their Official Video. During their gig with Truckfighters a few months ago, they had some live footage filmed and compiled to create a video for the track “A New Reality“.