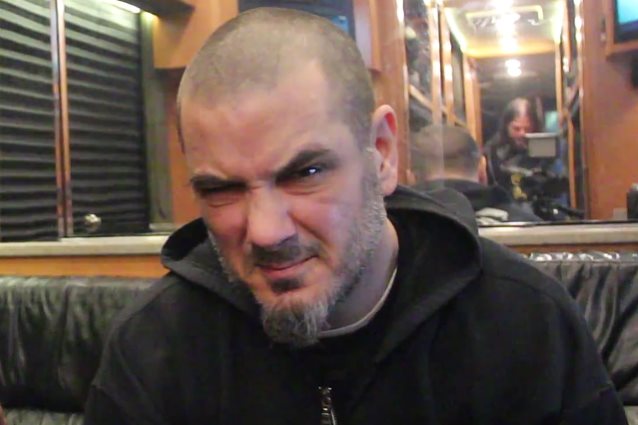 Phil Anselmo is currently on the road with Superjoint, one of the many projects he can lay claim to. On September 27th, Phil was interviewed on Jimmy Cabb’s 5150, where he announced yet another musical undertaking, En Minor.

From Phil’s description of the band, it may just be one of his most ambitious efforts yet and that’s saying something as he’s explored thrash, groove metal, black metal, hardcore / punk and more. In Anselmo’s own words, En Minor is influenced by the classic goth period of the ’80s and its artists like The Cure, Sisters Of Mercy, early U2, and Nick Cave & The Bad Seeds. Phil elaborates:

“I have a record coming out that’s been finished for two years almost now, of course — just like every other fucking record,” Anselmo said (see video below). “It’s with a band called EN MINOR. And I guess it would be my, ‘Hello, great dark eighties of SISTERS OF MERCY, of THE CURE ‘Seventeen Seconds’ record and ‘Faith’ album.’ Early THE CURE. Early U2. Nick Cave and the fucking BAD SEEDS or THE BIRTHDAY PARTY. David Bowie… I take all these influences and then somehow we came out with results.

“It is what it is,” he continued. “I’ll let the people decide at the end of the day. And we’ll see. But, once again, I’m not shootin’ for radio time here; I’m just trying to broaden my horizons, write some hearkening songs. But I think they have their own life, honestly. It’s retro only to a certain degree, I think, within me, because I know where it’s coming from. But I guess when a listener hears it these days, most people react… I hear the word ‘cinematic’ a lot, and I hear, ‘This is the best record you’ve done in thirty years,’ or some shit like that, something like that.“

According to Anselmo, En Minor is one of several projects he is currently juggling, with a number of recordings scheduled to be made available over the coming months.

“I do have other releases [coming out] before [EN MINOR], and that is the new SCOUR [EP] has been finished for about a year. So that’s coming out. The next [PHILIP H. ANSELMO & THE] ILLEGALS is coming out, and that’s a whole different kettle of fish from the first ILLEGALS. And then the EN MINOR is coming out. So I’m thinking maybe March of next year.“

Always a man with things to say, Phil addressed other issues in the on-camera interview with Cabbs. You can watch it all in the clips below.