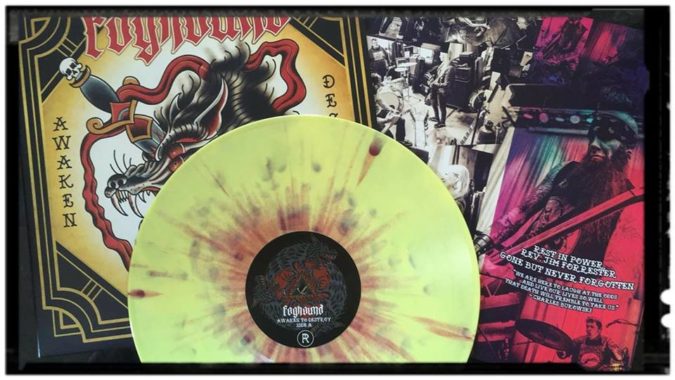 FOGHOUND, Maryland’s monolithic entity constructed of genre-morphing sonics and individually resolute members, are back with their new studio album, ‘Awaken To Destroy’, their third such overall.

Freshly released through Ripple Music, the ten-song record sees the quartet taking a turn toward darker and heavier territories when compared to their previous output. Such a destination is surely one that could have been expected, seeing as how during the album’s recording, the band lost bassist Reverend Jim Forrester in a senseless act of violence. This was after a prolonged health scare Jim had experienced prior to the event that robbed the band, as well as all of us and the world, of our friend and his immense talent.

On the ‘Awaken To Destroy‘ album, I hear the band dealing with things the best they can, possibly in the only way that they know how to, and it is not pretty. As I alluded to above, it is dark, heavy, and blunt at times, emotions reflecting themselves in the music as guitarist / vocalist Bob Sipes, guitarist / vocalist Dee Settar and drummer / vocalist Chuck Dukeheart III, work their shit out, so to speak, by instrument based means.

FOGHOUND welcomed bassist Adam Heinzmann into the fold during the recording of ‘Awaken To Destroy‘, and it is evident that they collectively rallied around the spirit and memory of Reverend Jim to finish the album.

Yes, these songs are clearly more muscular, definitely grittier in their tones, things that are instantly noticeable as the “Awaken To Destroy” title track greets us first thing. Don’t get me wrong, the signature FOGHOUND grooves are here, something that this band has monopolized on from day one. It is one of their greatest strengths, but now the lighter, seemingly more carefree, or happy-go-lucky feel present in earlier music is absent and in its stead, murkier overtones.

The fuzz now possesses moody elements that emanate from within it, yet it is no less effective or impacting, as songs like “Filthy” and its follow-up, “In Due Time“, are fierce and metallic. The latter, “In Due Time“, has been one of my favorite cuts since the first time I heard it, a careening, semi-thrash pacing battery of dominating aggression. It does contain brief passages of psyche-flavored music and vocals, via controlled detours into heady audio with trippy vocals.

It is followed by another incredible track, “Cut The Cord“, which is also fast to gain ground with octane-rich RPMs as it barrels at you. Breakneck, rapid-fire rhythms punctuate things as Dukeheart provides some awe-worthy rips on the kit, and I especially dig the Sipes-provided vocals here, especially those in a singular spoken passage.

For me, the highest point on the album comes with the span of a certain few tracks that arrive, beginning with the haunting acoustic insert, “Ave.” Anyone that was friendly with Reverend Jim, saw or followed his scribes online, knows the significance of the word as it relates to him. It perfectly prefaces the bombarding riff-driven, “Keep On Shoveling“, a song written and directly inspired by Forrester’s 2017 health scare. The song is a pulsing pummeling of chunky guitars, staggered drumming, and solid vocals espousing lyrics on the spirit of perseverance.

Some of the most unusual moments on the album come with the oddly, unlike-anything-Foghound-has-done-before “Staring Down The Demons“. An unusual main vocal approach, effect-laden guitars, acoustic touches, it all combines for a very oddly Pink Floyd-ian number, a glimpse as to what real possibilities exist in the FOGHOUND camp’s ability to ignore others’ genre-derived expectations.

Another one of the best, hardest-hitting songs on the album enters like a raging inferno with the masterful “Gone Up In Smoke“. To me, this is the band bringing their A-game, a take no prisoners juggernaut of riffs, rhythms, and granite solid rock. If this is the foursome at their hardest, most metallic-ly invested determination, then what follows is its direct opposite in all of those aspects. “The Buzzard” is wrapped in layers of lysergic elements, its fuzzy psychedelia takes flight into an ether of wailing guitars, multiple vocals, and experimental excess.

That mind-bending soar continues upon something that’s placed at the end of the album, after what sounds like the end of “The Buzzard“, and seemingly separate from it. Bonus song? Hidden track? Hell if I know, but it starts around the 37:15 mark and where the song before soared, this whatever-it-is feels like a descent into a hazy soup of LSD, and the significance of its lyrics is not lost on me.

“Significance”. That’s kind of a good word to use at this point, one that applies to myriad aspects related to this review of FOGHOUND‘s ‘Awaken To Destroy‘ album and the profound anguish that shaped it. From sorrow and loss comes something of relevance and weight out of the ashes of something incomprehensible. AVE!