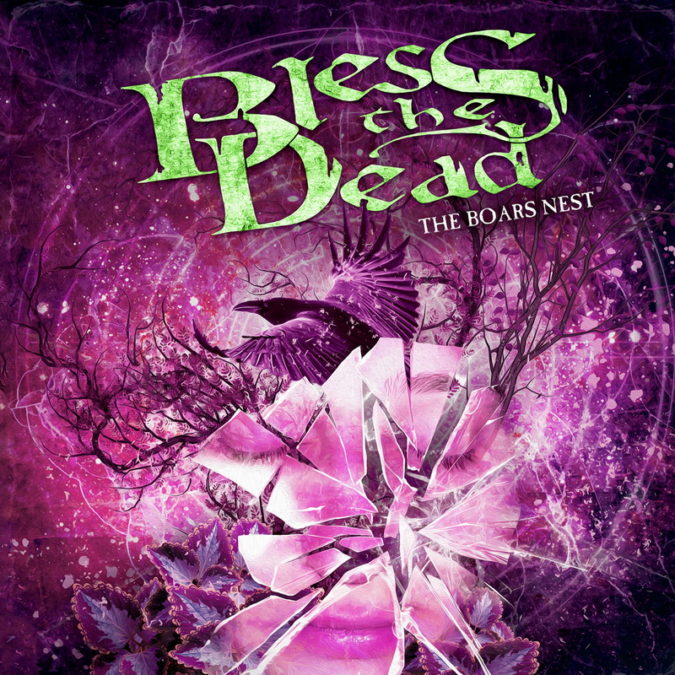 Atlanta has long been home to many a great southern styled rock and metal band, from acts like Confederate Railroad or Drivin And Cryin to Artimus Pyledriver or Volume IV, the ATL has got the rock.

In the past five years, since 2013, there has been at least one band that embodies those southern rock roots, but douses them in moonshine and ignites them with hellfire. I am speaking about BLESS THE DEAD, a band of hard-boiled, blue-collar, shit kickers that create some furiously unholy heavy metal infused with groove and powered by cojones.

BLESS THE DEAD – Noah Welborn (vocals), Allen White (guitar), David Pollard (bass), Jon Gray (guitar), and Keith Graham (drums) – first landed on my radar with the ‘2015 EP‘ a couple of years back. Now, they return with their new full-length album release from Sliptrick Records, this month’s ‘The Boar’s Nest‘ was released December 18th, and before all is said and done, you too shall indeed bless the dead.

Within the seven tracks on ‘The Boar’s Nest‘, this quintet takes us on a careening rampage of blustery, ballsy, blues-hewn, heavyweight music. These good ol’ boys get down by means of mashing together heavy rock and thrash metal, flavored to taste with plenty of punk rock attitude and grit. With riffs as hard and solid as Stone Mountain itself propelling them, songs like the chugging “Drinking Me” (see what I did there?) or “A Cold Day In Hell” will roll over you quicker than Sherman’s March to the sea.

In fact, the state Of Georgia’s documented past unequivocally contributes to the rebellious nature that ultimately colors much of its music. A distinctly inherent, anti-authoritarian nature permeates much of the music made there and the latest from BLESS THE DEAD is no exception. Tracks like “2 Tickets“, or the blistering stomp of “Kiss The Earth“, are chock full of individual expressionism, the type derived from instrumentation and projected posturing in unison.

“Kiss The Earth” is certainly one of the album’s strongest cuts, one that contains a doomy underbelly beneath its slithering advance. Yet, all is not just restrained trudging along, no, for select passages within the song are explosively rendered with unbridled aggression. Don’t just take my word for it, check out the official video treatment recently applied to the song:

I must also mention two tracks that are more… mold-breaking might be the best way to describe them, each having a feel of experimentation somewhat: “Whiskey Whore” and “Silent Of The Night“. The first, “Whiskey Whore“, has a slightly subtle psychedelic vibe as it begins, ethereally-tinged music and ghostly-ish vocals, but they soon yield to a crushing wall of uniquely toned guitar riffs and pummeling drum work.

“Silent Of The Night” eventually ends the album but not before it gives us a dark, powerful epic of swampy thrash music and semi-brash vocals. “Semi” because it is good to hear Welborn submit some clean utterances to the lyrical delivery, and then there is the music here itself, reminiscent of a time when acts like Pantera and Wrathchild America were dominating all.

Actually, that is a good point to make at this time I think, that the music of BLESS THE DEAD straddles the fence between traditional metal as well as the modern, concurrently. All the time it is doing so, it’s riveting and immensely enjoyable, animated and exciting, and the band had this to say about it and the album:

“The Boars Nest is an album about all the desire, thirst, appetite and prolific things of this world. Issues and matters that should always be controlled by moderation. If taken further, you could find yourself in misfortune. It’s thoughts through an unclear mind. It’s for people that can’t let go sometimes. Looking for things that could cut you the deepest, all the while giving back an inch at a time. It’s about living life fast and for the day, knowing it could all stop at any second. Some will struggle into nothing and willingness. Almost a memoir of a junkie. All while wondering how you will handle your ignorant bliss.”

How will YOU??! Perhaps it is time to discover that for yourself by listening to ‘The Boar’s Nest‘ in the stream provided here. You can find the album available for purchase now at the following links – (and make sure to check out details of the guy’s upcoming Album Release Show further below).

BLESS THE DEAD will also host a CD Release Party on Saturday, January 12th (2019) at Furnace 41 in Jonesboro, GA. There will be free BBQ catering from 5:00-7:00 P.M., with ticket purchase, along with vendors and giveaways. Other bands set to appear include Septarian, HellBent, Violence System, Prime Mover, Perrish 9, Control The Devastator, Hollow Sky, Tombstone, and Beast Mode. [Info]