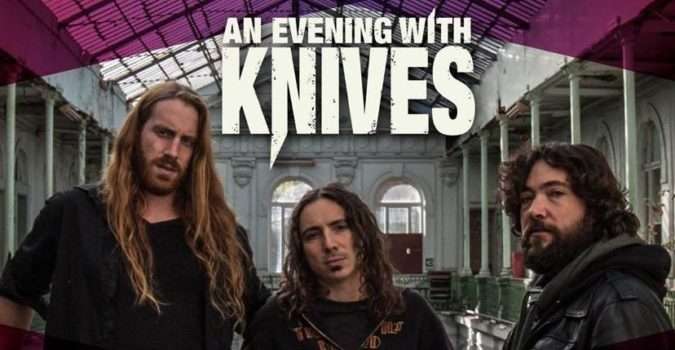 It used to be that anytime I heard the locale of Eindhoven, The Netherlands mentioned, the once-great Dynamo Open Air festival, which ran from 1986 to 2005, immediately came to mind.

In 2008, it was reborn as Dynamo Outdoor, then as Dynamo Metal Fest in 2015, but the later incarnations of this prestigious event just never packed the same wallop to me as the original. Now I have discovered something new (to me) that I can easily associate with that place, and it is none other than the band AN EVENING WITH KNIVES.

Back in early September, the trio – Marco Gelissen (guitar, vocals), Peter van Grunsven (bass), and Ivo Jonkers (drums, samples) – released their sophomore outing, the three-song ‘Fade Out‘ EP. The short player happens not just to be the guys’ second recording, either… but their second such in just the year 2018, after January’s full-length, ‘Serrated‘.

As I alluded to above, I have only recently discovered AN EVENING WITH KNIVES, but let’s not waste our time with any undue bullshit, okay? Blunt and to the point, for me, this is one of those rare types of bands that instantly resonates with you, quickly finding favor right from the first listen. At least that’s how things happened to transpire, with me arriving at the EP as the next item up in my personal – and terribly overflowing – “Review Queue” in recent days.

Three songs: the title track “Fade Out” and its follow-ups, “Sunstorm” and “Blackout“, and each is incredible, as well as impressive, in their own right. Though the band labels themselves as post-metal / post-rock, which is totally valid, of course, they also channel alluring blends of psychedelia and grunge fused with an experimental edge. All of this is quickly recognized right from the rollout of the nearly 10-minute intro song, “Fade Out“.

Wave after gradual wave of the heavy, hypnotic guitar soon caresses your inner ear, bolstered by rumbling bottom-end rhythms and powerful drumming. The song travels a repeating pattern throughout its trajectories, a sense of ascension at times, others that feel like a spiraling down, but all done as vocals laden with emotion ride those same paths.

Things get even headier with the slow-burning swagger of the instrumental “Sunstorm“, which is just a phenomenal jam, made even more intense with the occasional air raid siren. The song sort of acts like a lengthy intro for the EP’s third and final cut, the almost-instrumental-but-not-quite “Blackout“. Riveting, immensely effect-influenced guitar projects itself with a constant, echoing presence while staggered drumming punches the air here and there, only pulling back when the sparse vocals interject themselves. There are some moments that take on a slightly darker, more ominous mode, venturing into a bit of a progressive doom state just prior to the song’s abrupt cessation.

Yes, indeed… AN EVENING WITH KNIVES provides some rather alluring breathing room with the ‘Fade Out‘ EP. The press release that accompanied the EP’s submission to Riff Relevant reveals that the title track was also included on this year’s earlier release, ‘Serrated‘, but more importantly, the great significance of the “Fade Out” song itself.

It was inspired or influenced by, whichever you prefer, the death of Marco Gelissen‘s father due to Alzheimer’s Disease. Knowing that now, I believe that Gelissen has done a great feat in honoring his father’s memory with both the poignant song itself, as well as the profoundly affecting EP.

Stream it now by means of the Bandcamp player provided in this review, or go to AEWK Bandcamp directly for further streaming and purchase options.