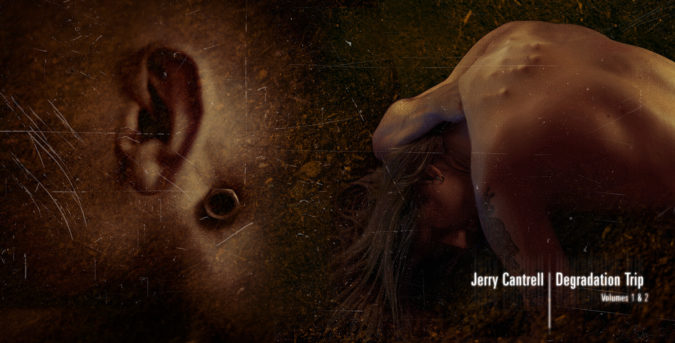 Expected to arrive on February 8th from Music On Vinyl, the ‘Degradation Trip Volumes 1 & 2‘ four-LP set will be pressed on yellow, red, and black 180-gram vinyl and is limited to 2,000 individually numbered copies.

The initial double album offering ‘Degradation Trip Volumes 1 & 2‘ was released via Roadrunner Records in November 2002 and was an expanded, limited edition of Jerry Cantrell‘s ‘Degradation Trip’ album, which was released five months earlier. The label, uneasy toward the idea of a double album release, made Cantrell condense it but promised to release all of his material, eventually doing so as the expanded version, including Cantrell’s original track order which differs from the singular album.

The follow-up to Jerry Cantrell‘s début solo album, 1998’s Columbia Records issued ‘Boggy Depot‘, ‘Degradation Trip Volumes 1 & 2′  was a cathartic exorcising of personal demons and issues. It was created at a time following the death of Layne Staley and the then-demise of Alice In Chains. It was a period when Cantrell was battling his own substance abuse issues, so what results on the album boasts dark themes and bleak visuals. Faith No More / Ozzy Osborne drummer Mike “Puffy“ Bordin and bassist Robert Trujillo (Metallica, ex-Suicidal Tendencies, Infectious Grooves) contributed to recording the album, along with pre-release touring to support it in 2001.

Cantrell recently stated the following in an interview with The Pulse Of Radio:

“‘Degradation Trip’ was the most personal and self-digging album I’ve ever written. It’s the deepest I’ve gone in my writing both musically and lyrically… so it’s a very personal journey, this record to me. It’s an incredible record.”

Stream the album by means of the Spotify player below – ‘Degradation Trip Volumes 1 & 2‘ will arrive on vinyl on February 15th. You can find more details on the release and find purchase locations via Music On Vinyl.