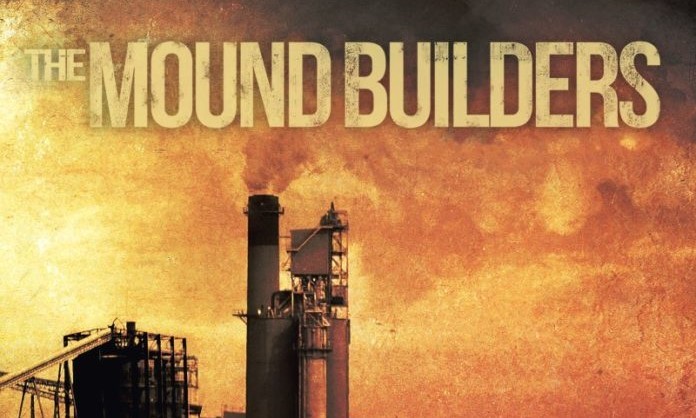 Lafayette, Indiana’s THE MOUND BUILDERS are one of those types of bands that once you have heard them, you instantly become a fan and cannot wait to hear more.

They seem cognizant of this fact and make it work to their advantage, by means of issuing music on a somewhat sporadic basis. Never ones to over saturate the underground with too much of their original wares, THE MOUND BUILDERS – Jim Voelz (vocals), Brian Boszor (guitar), Jason “Dinger“ Brookhart (drums), and Ryan Strawsma (bass) – opt to follow the practice of “quality over quantity” instead. That way, when they do issue a new recording, people can rest assured of at least two things: one, that it is going to kick ass, and two said album will thoroughly impress.

The new self-titled, full-length album, ‘The Mound Builders‘, arrived from Failure Records & Tapes on January 18th, and simply put, it is one caustic sum bitch! Amassing rich, yet volatile doom, hardcore, and stoner / sludge metal contents under pressure, this is an eight-song schooling in sonic assault and battery. Maybe it’s just me, but when I see a band delivering a self-titled album after some previous releases, it makes me imagine that the band is seeking to re-establish themselves. Not necessarily starting over, or a do-over, what have you, but that they, as a band, are looking at things as if they were a blank slate, one with no preconceived notions or expectations.

To be clear, I am not saying that is or was THE MOUND BUILDERS intent here and truthfully, it does not matter if it was or not, at least not to me, anyway. On this outing, this foursome arrives like the villagers seeking Frankenstein’s Monster, all worked up with fire sticks in hand as “Torchbearer” ignites after a brief, subdued start and build-up. With a burning fuse of guitar riff grooves, the guys quickly get in the pocket and are soon melting down rolling rhythms. While they fuel this simmering output, Voelz vocals are throat-wrenched with aggression – the group contributed “whoo-ooo-ooaaaaa”s in the background along the way are also a cool touch.

Ever on top of their game, we get the faster-paced, dizzying gargantuan “Hair Of The Dogma” next. With a tempered avalanche of rapid-fire drum inserts and a fret smoking display of riffing prowess guiding the way, the song delivers a punch to the gut right from the start. Such fortified blows are the signature stock in trade of this band, a group of Hoosiers who construct savage audio taking the form of such numbers here as “Acid Slugs“, “Regolith“, and “Vanished Frontier“.

For me, some of this album’s finest moments come by means of the absolutely abrasive barrage of “Separated From Youth“, a cut with doom-tinged undercurrents at points. They do not maintain a continual presence throughout though, soon we get a lesson in hardcore swagger within the verses and an occasional southern twang in the guitars. Boszor shines on this one, dealing some serious hands but he isn’t alone for Brookhart and Strawsma step into the spotlight when called, and Voelz goes full-on inhuman as well.

Perhaps the pinnacle of this eponymous monstrosity comes with the malicious intentions of “Broken Pillars“. A most damaging composition, one bent on destruction beyond repair as it emits ruinous riffs capable of reducing buildings to so much rubble in their wake. The very density of this song is bolstered by its shuddering bass lines while, once again, Jim Voelz’ vocals are injurious in their own right.

Then again, everything about this self-titled juggernaut justifies its right to exist, an album of such misanthropic magnitudes that it literally screams disruption. Very much in the vein of those that decimated before them, THE MOUND BUILDERS manifest elements found in such detrimentally iconic acts as Buzzov*en, Soilent Green, or Sourvein. Though they are labeled as construction type workers, if you will, like some miscreant creationists in reverse, THE MOUND BUILDERS also possess the means to annihilate with their music… and this self-titled record is undeniable proof of such a claim.