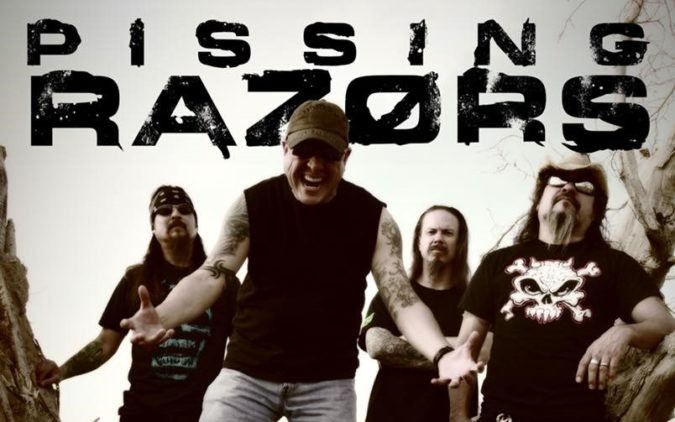 It is 1993, in El Paso, Texas, when a pair of sibling musicians, Eddy and Danny Garcia, seek to form a band that is “loud and aggressive in ferocity, and heavy in punk and metal elements”.

Adopting the name Back Door Cyclops, with Eddy playing guitar and Danny on drums, the pair are soon joined by bassist Mat Lynch and vocalist David “Loco Pelon” McNutt. However, as the story goes, after a trip to a brothel in Mexico where McNutt contracts gonorrhea, which he describes the feeling as if he were “pissing razors”, the band quickly resettles itself under the inspired name of PISSING RAZORS.

The band is soon playing the local venue circuit in El Paso and the surrounding areas, where they hammer it out in the trenches, the proving grounds where bands hone their metal. Around 1995, David McNutt leaves the band and new vocalist Joe Rodriguez comes on board, but there are other changes looming for PISSING RAZORS, as drummer Danny Garcia decides to altogether move out of Texas. Eddy Garcia takes the opportunity to switch from playing guitar to drums, while Mat Lynch, following Eddy’s instrument switching lead, moves from the bass to playing guitar.

These moves allow a former bandmate of Rodriguez’s, guitarist Rick Valles, to join the band in the now open bassist slot (talk about a case of musical chairs…). With PISSING RAZORS new lineup of Garcia, Lynch, Rodriguez, and Valles in place, the quartet begins working on material that will eventually become the contents of the band’s début album.

It arrives in 1996 when PISSING RAZORS independently release their full-length introduction to the masses, the oh-so appropriately titled ‘Psycho Punko Metal Groove‘. The album captures what the foursome is all about – powerfully delivered, aggressive groove metal with plenty of attitude and unbridled ferocity. Now, with music officially released, the band begins seeking a record label, sending out the album and other demos to labels all over the place. In time, they sign with the Germany/U.S.-based Noise Records.

PISSING RAZORS would remain with Noise Records for several years, releasing three more studio albums while there: 1998’s self-titled ‘Pissing Razors‘, 1999’s ‘Cast Down The Plague‘, and 2000’s ‘Fields Of Disbelief‘. Prior to their release of the third album in 2000, and after the band’s first major tour, guitarist Mat Lynch decides to exit PISSING RAZORS, citing that the band’s financial situation had not improved since joining the Noise Records roster. Lynch’s then-guitar tech, Cesar “Achmex” Soto, steps into the opening left by Matt’s departure, where he then contributes to the songwriting process for the ‘Fields Of Disbelief‘ album.

Not long after that album’s release, Joe Rodriguez would be the next to leave, also citing financial difficulties. Enter vocalist Jason “Dewey” Bragg (Kill Devil Hill, Smoke Hollow, Years Of Cold) at a point where PISSING RAZORS had grown disillusioned with Noise Records, thus further changes were afoot.

However, those changes would not deter PISSING RAZORS. In 2001, the band delivered the phenomenal ‘Where We Come From‘ album via their new label residence, Spitfire Records. Many consider this to be the group’s breakthrough recording, the right album at the right time if you will, yet the band behind it had more alterations in store. Despite his short time there, Jason “Dewey” Bragg is soon leaving, after he and the other band members apparently conflicted with one another while out on tour for this release.

Bragg was quickly replaced by Andre Acosta, a local vocalist from El Paso who had not worked with any signed, professional bands, nor had any touring experience. Outsiders questioned the move, as PISSING RAZORS had become a recognized, established act at that point and could easily attract talent on the same level as themselves. Either way, the band would theoretically “test” Acosta, trying him out with a faux “live” recording of their material that arrived as 2002’s Spitfire Records release, ‘Live In The Devil’s Triangle‘. Its title was inspired by the nickname for the area where Eddy Garcia grew up, the album was actually recorded in the same studio that the band’s first unsigned release was recorded in, with a few close friends providing the “live crowd” sounds.

It was, once again, not long before a member abruptly quit the band citing financial difficulties, as Cesar “Achmex” Soto was the next to leave. Eddy and Rick were able to recruit guitarist Matt Difabio as Soto’s replacement, while the band continued to work on material for their next studio album, all while financial issues continued to plague the musicians. Each of them was working part-time or seasonal jobs when not on tour but managed to pull things together for a fourth full-length studio record.

‘Evolution‘ was released through Spitfire in 2003, and contained songwriting contributions from both Difabio and Acosta. That year also marked PISSING RAZORS‘ ten-year anniversary as a band. Following the album release, they scheduled a short touring run to celebrate both events. Unfortunately, shows at each stop on the tour sold only a fraction of the tickets available, reflecting a drastic drop in attendance for the band. This would be the final straw for PISSING RAZORS, who quietly disbanded in 2004.

Over the next decade, various members from differing incarnations of PISSING RAZORS would pursue other band endeavors, including Ministry, Snail, Single Bullet Theory, 3 Headed Snake, and Kill Devil Hill, to name a few. In that time, the legacy of PISSING RAZORS only grew as new fans discovered the then-defunct band and old fans pined for their return.

Fast forward to 2014, when founding members Eddy Garcia and Mat Lynch, along with vocalist Joe Rodriguez, began discussing plans to reunite. However, none of the previous bassists for PISSING RAZORS could take part, so new blood was brought in, Geo Gomez. Despite social media announcements of the band’s reactivation, not much else occurred… at that time, anyway. But, just this past week, like a bolt out of the blue, PISSING RAZORS declared their return was indeed solid, and they shared new music to substantiate this.

PISSING RAZORS have signed with Art Is War Records (AIW) and will return with a new studio album in 2019. To properly tease this fact, the band has unleashed a brand new single, “Crushing Grip“, accompanied by a lyric video. The song was engineered by Eddy Garcia and PISSING RAZORS, while mixed and mastered by Chris Collier. Yes, make no mistake… PISSING RAZORS have returned and they are just as aggressive and fiercely caustic as ever before!

“Pissing Razors is very excited to officially be joining the ranks of the Art Is War Records. We look forward to a long and prosperous musical journey together. AIW is the perfect choice for us to work with in releasing our long awaited new material. The world will see a return to our early heavy groove, punk infused metal roots people know us best for.“

With that, Art Is War Records CEO Lucas Joyner adds:

“Having [Pissing] Razors join the label has been in the works since the start, myself and Steev from Skinlab worked hard to make sure a home for the El Paso, Texas legends was here and nowhere else then at Art is War Records! We will be ready to unleash the beast in 2019.”

Needless to say, excitement about the return of these monstrous groove metal generators is building and we hope to bring you further developments as they happen. Here’s to the next phase of these mighty metallic warriors, the unbeatable PISSING RAZORS!

PISSING RAZORS have also confirmed two live shows set for February, including a signing event for the new single. These shows are: