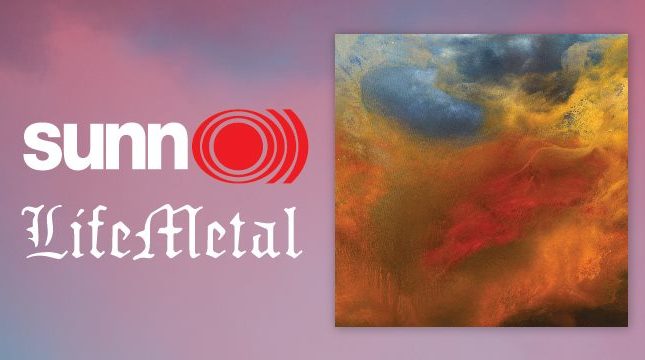 One of this planet’s heaviest harbingers of heaving sonic experimental doom, the Seattle, Washington entity that is SUNN O))), announced the coming of a new studio recording.

‘Life Metal‘, produced by the famed Steve Albini, is their first new studio album in four years and is due for release via Southern Lord Records in April 2019. The album will be supported by the premiere U.S. tour of their 2019-2020 season, their first U.S. tour since 2017. It will include stops at The Masonic Lodge in Detroit, MI., Howard Theatre in Washington, D.C., the Agora Theatre in Cleveland, OH., Rockefeller Chapel in Chicago, IL., The Caverns in Pelham, TN., and Brooklyn Steel in Brooklyn, N.Y. Dates and details for all upcoming SUNN O))) touring can be found below, with more info to soon surface.

For the realization of ‘Life Metal‘, SUNN O))) co-founders Stephen O’Malley and Greg Anderson set out on a path to create new music and new methods of working in the studio, without forgetting prior studio accomplishments. Part of this plan would be nailing down the actual recording process in Electrical Audio studios with the participation of owner Steve Albini. One phone call later, Albini purportedly confirmed his role with the following simple statement: “Sure, this will be fun. I have no idea what is going to happen.”

After some work-shopping on the writing and conceptualizing of their plans in the very building where the band was formed, Downtown Rehearsal in Los Angeles, a pre-production session with full backline was recorded at Dave Grohl’s 606 Studios in Northridge, California.

In July 2018, SUNN O))) spent just over two weeks in Chicago at Electrical Audio (Studio A), with Albini at the helm of the all-analog sessions. Recording and mixing everything on tape for a completely analog production, ‘Life Metal‘ was mastered in October by SUNN O))) ally Matt Colton at Alchemy in London, yet not before select guests were brought in for collaborative contributions.

Tim Midyett, a close friend of Anderson and O’Malley since the Seattle days of the early 1990s, and a member of Silkworm, Bottomless Pit, and Mint Mile, delivered performances on aluminum neck bass and baritone guitars; instruments he helped pioneer playing alongside Albini in the 90’s band Shellac. Also, prolific music composer Anthony Pateras arranged and recorded an incredible contribution of a pipe organ for a piece titled “Troubled Air” (titled after an essay by author Aliza Shvarts, who also penned the liner notes for SUNN O)))‘s ‘Kannon’ LP).

Along with SUNN O))), all of these lent their creativity and talent to the materialization of ‘Life Metal‘, while paintings from visual artist Samantha Keely Smith graciously adorn the album’s sleeve. Photographer Ronald Dick shot the musicians in baths of colorful light for the SUNN O))) promotional pictures.

With today’s news comes the revealing of the ‘Life Metal‘ album details above, along with a video trailer and the aforementioned touring itineraries. In closing, a second more meditative LP titled ‘Pyroclasts’, recorded by Steve Albini in parallel with ‘Life Metal‘ will be revealed later in 2019. Further details will be released in the times ahead.