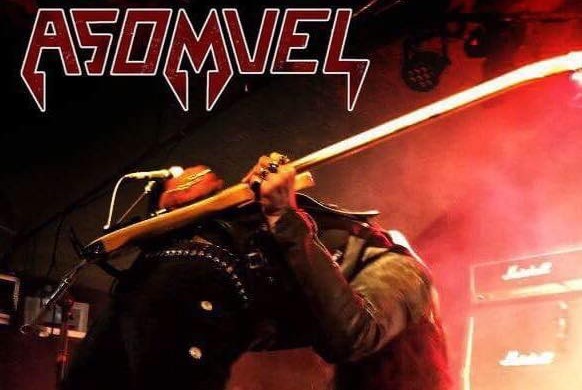 Today, the band is sharing the details about their hotly anticipated forthcoming new album, ‘World Shaker‘, set to arrive May 3rd. That will be followed by heavy touring cycles set to take ASOMVEL all around the globe.

Since the release of their 2009 début album, the smashing, well-respected ‘Kamikaze’, eyes and ears from all over the planet were cast in the band’s direction. However, barely a year later, the band was shaken to its core in 2010, when bassist and frontman Jay-Jay Winter was killed in a road accident. Although a devastating tragedy, co-founding guitarist Lenny Robinson knew that the band had to continue in tribute to the determined spirit of their founder.

Continue they did, as ASOMVEL blew minds and speakers with their 2013 album, ‘Knuckle Duster’, and the following year recruited Jay-Jay’s nephew, Ralph Robinson, into the fold. ASOMVEL spent the last couple of years playing around the world, including tours of Brazil, dates in Japan, Slovenia, Germany, Spain, France, and Ireland – these dates included many respected festivals such as Hammerfest, Party San Open Air, Siege Of Limerick, and MetalDays.

Now, ASOMVEL is poised to do it all again with ‘World Shaker‘, which is dedicated to Jay-Jay Winter. It’s also the first album to feature the new line-up; Finnish drummer, Jani Pasanen, and Jay-Jay’s nephew, Ralph Robinson. Alongside co-founding band guitarist Lenny Robinson, the trio recorded the new album at The Stationhouse under the guise of producer James ‘Atko‘ Atkinson, with mastering done by Jaime Gomez Arellano at Orgone Studios.

When asked about the new record, bassist and vocalist Ralph Robinson quipped:

“We’ll be releasing World Shaker in May, through Heavy Psych Sounds. We’ve got 11 tracks ready to go; the best you’ve heard in a son-of-a-bitch long time!“

You will find the ‘World Shaker‘ album details and a new official video for the song “True Believer” (as well as one for the previously shared title track, “World Shaker“) below. Also included are the first live dates of 2019 announced by ASOMVEL.

‘World Shaker’ will be available in the following formats, with pre-order active now at Heavy Psych Sounds.