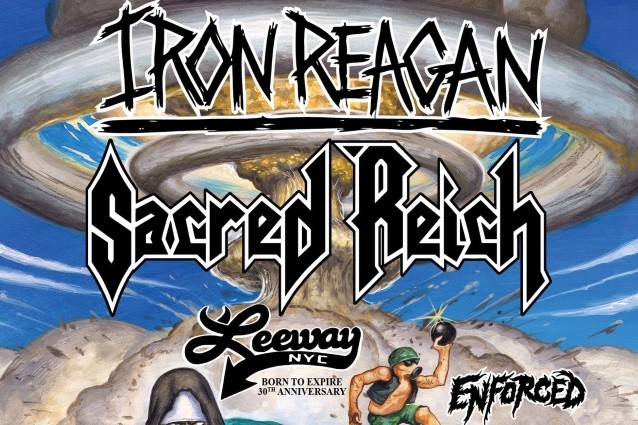 A short tour of incredible participants has been announced and is set to take place this spring, one that will see the union of old-school bands and new ones together in one package.

Yes, the classic and contemporary worlds of metal will unite this May when SACRED REICH and IRON REAGAN, supported by LEEWAY and ENFORCED, all hit the road together. The foursome will embark upon a 10-date trek of the eastern portion of North America that will begin in Asbury Park, N.J. on May 9th and end on May 19th in Brooklyn, N.Y.

For Arizona-based metal legends SACRED REICH, this will be their first U.S. and Canadian runs since their smashing return with the “30 Years Of Ignorance Tour” in 2017. The upcoming tour will also see the band rejoined by their former drummer Dave McClain (ex-Machine Head), their kit-man between 1991 and 1997, where he appeared on several singles and two full-length studio albums: ‘Independent’ (1993) and ‘Heal’ (1996).

The band is now working on their first new album in over two decades, the recently revealed ‘Awakening‘. Bassist and vocalist Phil Rind commented the following:

“Recording is in full swing with producer Arthur Rizk at The Platinum Underground in Arizona. We are so excited to be back in the studio after 23 years. Dave is currently killing it on the drums. Sounds sick! Our new record ‘Awakening’ is due this summer. Stay tuned! Tour dates across the planet coming your way!“

IRON REAGAN is continuing to support their latest release, the 2018 EP, ‘Dark Days Ahead‘, while LEEWAY is celebrating the 30th anniversary of their début album’s release, ‘Born To Expire‘ (1989). Then there is ENFORCED, an up ‘n coming crossover metal band from RVA (Richmond, VA) that is beginning to build a name for themselves since their 2017 start.

Following the U.S. run this May, SACRED REICH will head to Europe for a series of festival performances and select shows with Testament in July and August. That will be followed by their inclusion on Megadeth’s MEGACRUISE in October and the full-on “Awakening European Tour 2019” this November – December. Find all tour dates and itineraries listed below.