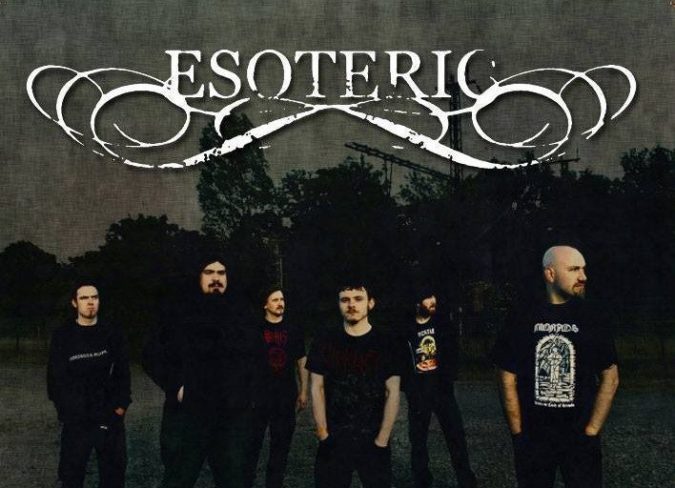 It is 1992, in Birmingham, England, United Kingdom – the home of such legendary acts as Black Sabbath, Judas Priest, Electric Light Orchestra, The Moody Blues, Napalm Death, Godflesh, and many others. A collective of musicians has gathered together and united themselves under the name ESOTERIC.

By 1993, the six of them – vocalist Greg Chandler, guitarists Simon Phillips and Stuart (no last name is given), bassist Bryan Beck, drummer Darren Earl, and guitarist/ keyboardist Gordon Bicknell – have recorded and independently released an eight-song demo, ‘Esoteric Emotions – The Death Of Ignorance.‘ The music it contains is a merging of experimental doom and death metal rife with intensely atmospheric and psychedelic enhancements.

The songs are quite lengthy, none less than seven minutes, and at least one that is nearly 17-minutes, where the band explores themes of the downtrodden. Containing elements of what would eventually become known as funeral doom and drone-style music, ESOTERIC is on the ground floor of a growing musical trend. It is one that is becoming heavily established at that time, by several bands on the Peaceville Records label – like Katatonia, Paradise Lost, Novembre, and My Dying Bride.

Soon after the demo surfaces, ESOTERIC grab the attention of the label Aesthetic Death, which gives the band an offer to record a proper full-length album. They accept. In June 1994, ESOTERIC enter Rich Studios in Birmingham and record their six-song, double album début, ‘Epistemological Despondency’. Shortly after the album’s release, Stuart and Darren Earl exit the band, allowing new guitarist Steve Peters to come aboard, but filling the vacant drummer slot will present a problem. In fact, many problems are about to plague ESOTERIC.

After playing a handful of shows in the U.K., the band travels to Germany to undertake a brief tour, but halfway through an injury to Peters makes it impossible to complete the trek. Back home and soon mended, ESOTERIC launch a U.K. tour in June 1995, but it too is cut short, when the band’s equipment was destroyed by fire after only two shows. Perhaps at the time, road excursions weren’t a good thing for ESOTERIC, and it is not long until they decided, once their equipment is replaced, to begin pre-production on a second album.

In 1997, ESOTERIC release their sophomore album, another double outing for Aesthetic Death, the nine-song ‘The Pernicious Enigma‘. Yet, as the band begins to embark upon a second try at touring Germany in late 1997, guitarist Simon Phillips abruptly quits on the day before their scheduled departure. Vocalist Greg Chandler is able to quickly adapt and takes on some of the guitar playing in the band, something that becomes a permanent arrangement in ESOTERIC in the years since.

Progress within ESOTERIC was beginning to slow at this time, due in part to growing work demands without a full, stable roster within the band, especially behind the drum kit. At one point, the band realizes they have been working on three songs for nearly a two-year period. Utilizing session drummer Keith York, ESOTERIC eventually issue the ‘Metamorphogenesis’ album – which was recorded, engineered, and produced without the aid of professional mixing or mastering technicians – through the Italian Eibon Records in 1999.

The unstable lineup predicaments within ESOTERIC would continue for their fourth album as well, beginning with the departure of bassist Bryan Beck. This leaves the three remaining members, Chandler, Bicknell, and Peters, who once again recruit drummer Keith York and a fellow session player, bassist Trevor Lines, to complete the recording. After negotiation with various labels, ESOTERIC sign with the French label Season Of Mist for the release of their fourth studio album, ‘Subconscious Dissolution Into The Continuum‘, in 2004.

Around the mid-2000s, ESOTERIC once again nail down an official lineup, with new members Andy Semmens (drums), Mark Bodossian (bass), and Olivier Goyet (keyboardist). This evolution in players allows ESOTERIC to return to regular live performances of their musically complex compositions. ESOTERIC garner immense acclaim from both fans and critics after a number of shows and tours throughout Europe in 2004 and 2005.

Unfortunately, the constantly shifting membership within ESOTERIC continues and in 2005, Semmens leaves the band, followed by Steve Peters in 2007, and Olivier Goyet in 2009. Kris Clayton (Camel Of Doom) joins as session live guitarist in 2007, remaining in place until 2009, when Ilia Rodriguez takes over live duties. Drummer Joe Fletcher also joins the band at the beginning of 2007, while Jim Nolan, a permanent third guitarist, is brought in at the end of 2009.

During this period of further revolving musical chairs, ESOTERIC release some of their best, critically acclaimed work, with a pair of offerings through Season Of Mist, 2008’s ‘The Maniacal Vale’, and 2011’s ‘Paragon Of Dissonance.‘

Now, eight years since their last studio album release, this past week ESOTERIC announced that they were to begin working on a new, as-yet-untitled album in April. The long-awaited follow-up to 2011’s ‘Paragon Of Dissonance‘ will be recorded at vocalist and guitarist Greg Chandler’s Priory Recording Studios in Birmingham, and is expected to be released on Season Of Mist during 2019.

“The new album, which will be 2CDs and 3LPs in length, sees a return to the heavier use of psychedelic effects and a greater variety of tempo, expanding on the sound developed since the band’s inception in 1992.”