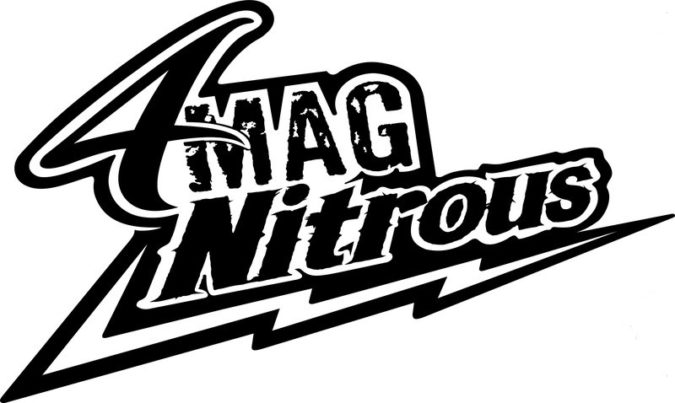 Straight to the point, I am a bonafide sucker for southern metal. I don’t know particularly why, perhaps it was my upbringing in the south, or maybe not, who’s to say?

More than likely it is because of the ballsy rock’s got-everything-to-prove truths and hard as nails attitude… oh, and those damned heavy grooves (can’t forget those, right?)! Certain bands just emanate all of that in their music, they are able to channel their roots, both musical and human, in such a way that it is lethal. The subjects of today’s reviewing spotlight, Louisiana’s 4MAG NITROUS, do it in spades, and in such a way that “lethal” is nearly too tame a word to use concerning the results.

In March, the band – Joel Cangiolosi (vocals/guitar), Kib Prestridge (bass), Wayne Poche (drums), and new guitarist Ben Michon – will release their third official outing, the four-song ‘High Road‘ EP. It is set to arrive digitally on March 1st and CD on April 1st, and I am here to tell you now that you are more than likely gonna love the hell outta the great southern ass-kick that is this short player.

With sonic aspects that are ferociously untamed, with massive riffs, dense rhythms, and dizzying drum work, this is music rife with the type of aural language derived only from where someone dwells. In this case, it is way, way down below the Mason-Dixon Line, from deepest southern Louisiana and you will know that the instant this machine gets underway with “HWY 44 Roadkill“. This chunky chugger, with its thick guitars, locomotive-like rhythms, and decimating drum work, is a grit-impacted rager right off the proverbial line.

Make sure not to blank out on the song’s mid-section either, as there is some fantastic interplay between the guys. The instruments firing away, yet complementing one another as they set things up for some exceptional guitar solos.

Our ferocious foursome soon engages the latter part of their name when they unleash the supercharged second song, “Cosmic Feet” (streaming). This number gains serious traction as its backing momentum builds by the nanosecond, never letting up as it careens about at dizzying, break-neck paces. For its follow-up, “Dragnut” (streaming), the band displays a more harmonic side (not to be mistaken for “melodic”), a lot of which is derived from guitar tones in this case.

One thing that is never melodic on these songs is the vocals gracing each of them, they are gravelly and aggressive, at times bringing to mind another son of The Creole State, Exhorder’s Kyle Thomas. Perhaps he is an influence on Cangiolosi or maybe he isn’t and this is just happenstance, but either way, we now arrive at the standout cut, “One Shot“. From the lyrics, the guys seem to refer to a gunshot, but it may as well be nitrous, adrenaline, or even cocaine because this song has such an incredible kick to it.

Like an ironclad mule on steroids, the 4MN pit crew unleashes a hybrid beast of backwoods groove metal possessed by a bit of thrash madness. That singular, isolated discharge referenced in the title strikes and leaves you reeling amid a thunderous maelström of musicality. Guitar strikes pierce like lightning, the bass and drum section emits a pummeling tumult of rhythmic blasts, and, depending on your tastes, this song may just be the high watermark of the album.

Yes, depending on those tastes and what constitutes them, there is huge potential for you digging 4MAG NITROUS and their upcoming ‘High Road‘ EP release. Perhaps you are already well into the band, having heard them on your own, or maybe via A&E’s “Dog The Bounty Hunter”, Discovery Channel’s “Monster Garage“, or Lionsgate Films’ “Wrong Side Of Town“, as their music has been used in each in the past.

In closing, if music described as a band like Hell Camino or Floodgate melded with Gideon Smith & The Dixie Damned and then distilled through Motörhead is appealing to you, then get a swig of this! Like 4MAG NITROUS, you too can take the ‘High Road’ when the EP arrives this week (digitally), or next month (April – physically).