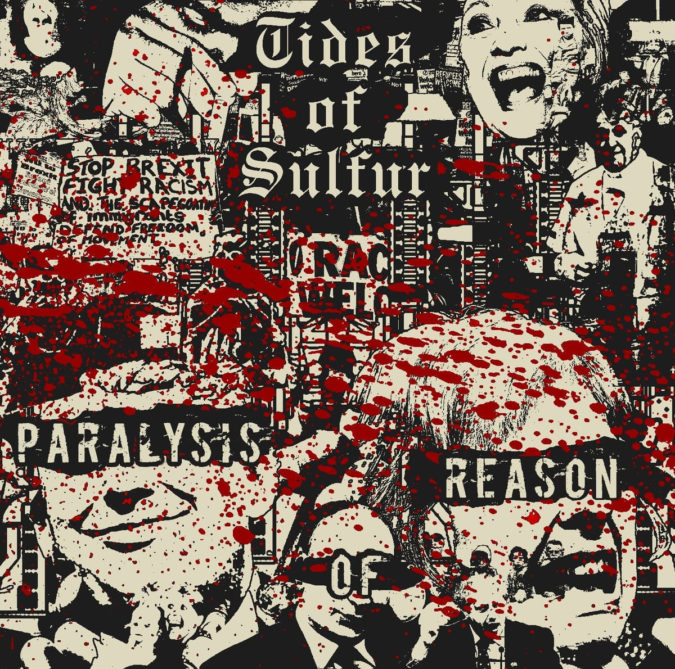 Out of South Wales, Great Britain, United Kingdom is the home of blackened sludge trio TIDES OF SULFUR, who is set to unleash their new EP at the end of this month.

‘Paralysis of Reason‘ is due to hit land on March 29, 2019, and we have a premiere of the title track streaming for you today. In five tracks of completely nihilistic filth, TIDES OF SULFUR incorporates elements of sludge, doom, death, and black metal to create one of the more ferocious and pissed-off EP offerings thus far with ‘Paralysis of Reason‘. The band consists of Chris Bull (bass and vocals), Anthony O’Shea (guitar and vocals), and Tom Lee (drums and vocals), and these Welsh gents have been slinging riffs, weed, and misery since 2012.

Drawing on the influence of more extreme forms of heavy music such as black metal, grindcore, crust, and primitive doom, TIDES OF SULFUR has been busy releasing music in some form nearly every year since their inception, starting with the ‘Eternal Bleeding‘ Demo in April 2013, ‘Ypres‘ EP (October 2014), singles ‘Betray‘ (February 2015) and ‘Sky Bastard‘ (April 2015), a split release ‘The Last Words Of A Dying Planet‘ with The Air Turned To Acid (August 2015), and ‘Extinction Curse‘ (July 2016). This is a band that refuses to conform to genre restraints.

The ‘Paralysis of Reason‘ EP was recorded and mixed by Phil Smith at One Louder Studios, in Newport, Wales; with mastering by Dennis Pleckham (Bongripper) at Comatose Studio.

The vinyl release is being handled by Sludgelord Records, Black Voodoo Records, and MinoRobscuR, with the CD from APF Records, and cassette format via Astral Noize Records. Release format details and pre-order links are available below the tracklist, with the title track “Paralysis of Reason” streaming on the Bandcamp embed. Go let them rip your entire face off.

TIDES OF SULFUR is:

PRE-ORDER  ‘Paralysis Of Reason‘ on: