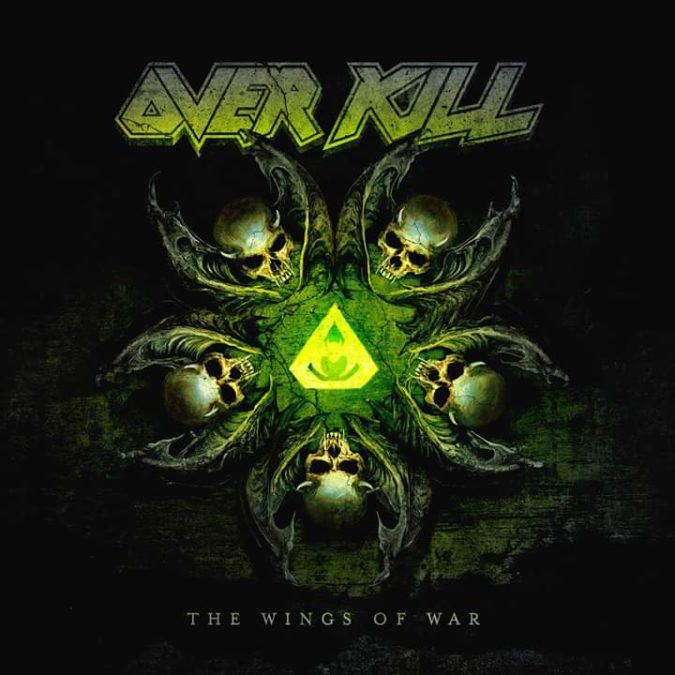 When you’ve been at it for as long as OVERKILL has, things can get a bit stale if you’re not careful. The relentless grind of album, tour, album, tour doesn’t leave much time for quiet reflection.

Luckily, the guys in OVERKILL are still as hungry as ever on ‘The Wings of War‘, their 19th (!) studio album, this time on Nuclear Blast Records. They’ve been on a hot streak since 2010’s ‘Ironbound‘, and even the departure of longtime drummer Ron Lipnicki has failed to slow their unstoppable momentum. Ex-Shadows Fall / Flotsam & Jetsam basher Jason Bittner was recruited to replace Lipnicki, and he hits the ground running here. The unflappable core duo of lead throat Bobby “Blitz” Ellsworth and bassist D.D. Verni has seen more than their fair share of members come and go, but the two men persevere, determined to keep this operation running like the well-oiled machine that it is.

Songwriting has been a top priority for OVERKILL for some time now, the hooks and choruses coming in bunches and dripping with mean green menace. The musicianship is at such a high level that the band can merely focus on the songs, all the technical weapons already oiled, polished, and ready to be drawn from their holsters at a moment’s notice.

The pulsating industrial sounds of opener “Last Man Standing” get your heart rate thumping right away, Bittner announcing his arrival with a withering attack on his drum kit. Ellsworth sounds like he’s only getting better with age, his raspy growl inseparable from OVERKILL‘s music, the two still working in perfect, deadly harmony. This track is EXACTLY what we expect from OVERKILL, and it’s a formula that hasn’t gotten the least bit tiresome, even after nearly 40 years. The guitar solos are on-point as always, face-meltingly fast and full of hairpin turns, finishing off with some twin-lead harmonies that give the song that anthemic OVERKILL feel.

“Believe In The Fight” is another superb neck-wrecker, the metal songcraft here is a thing of beauty – instinctual, uncomplicated, and immediately satisfying. “Head of the Pin” keeps the winning streak intact, Blitz‘s unshakable command of the mic simply mesmerizing. Bittner‘s explosive drum performance, combined with the slick but biting production makes every track shine, the frequent tom fills and kick drum flourishes holding us under their spell throughout.

“Batshitcrazy” is pure thrash bliss, a battering ram of potent riffs that only rests for a moment during the slower-paced bridge section, setting us up like bowling pins to be knocked down by the wholly expected (but still irresistible) guitar solo that follows. “Distortion” starts off almost contrarily with clean arpeggios and mournful guitar lines dancing about elegiacally. The song shifts and contorts until it settles into a nasty mid-tempo groove, a short break in the non-stop track meet that characterizes much of the album.

“A Mother’s Prayer” continues to pound us into the dust with D.D.‘s intense bass performance and Dave and Derek‘s non-stop riff buffet. Then comes the punky “Welcome to the Garden State”, where the boys make their best sales pitch as travel agents extolling the virtues of their home base, New Jersey, in a blisteringly fun old-school romp. Hell, they even give a shout-out to The Boss, Bruce Springsteen, with the “Born To Run” gang vocals that bring the song to a close.

The creeping guitar notes that open “Where Few Dare To Walk” are soon gobbled up by swarms of buzzing power chords, only for the intro to be reprised by D.D.‘s grinding bass. The verse is relatively restrained, leaving ample room for Bobby to make his case for being the best vocalist in thrash metal, his pipes still stronger than many vocalists half his age. Some bands go to the well once too often, eventually coming up empty, but for OVERKILL the water is still flowing fiercely, the songs here of a pedigree and maturity that few bands will ever match.

Either OVERKILL decided ahead of time that they were going to flaunt the talents of their new drummer at every opportunity on ‘The Wings of War‘, or Bittner just crafted enough solid gold drum patterns during the writing process that they became integral to the album because his fingerprints are all over this disc. “Out on the Road-Kill” is yet another example of his influence, the satisfying snare crack propelling the song out of the starting blocks, syncing up magnificently with the stellar rhythm guitar work of Dave Linsk and Derek Tailer.

More sullen guitar riffs start off the final track “Hole In My Soul,” with every band member coming into the picture one by one, achieving lift-off with another hyperspeed blast of energy that ends the album on a strong note.

OVERKILL has long been considered the Motörhead of thrash, and it’s a valid comparison. Like that other venerated institution, OVERKILL has released a steady stream of albums that might not always seem to have a particular identity on a case-by-case basis, but when you take a step back you’re left awestruck by the quality they pump out year in, year out. You may not get many surprises when you buy a new OVERKILL disc, but you’re never disappointed either.

The only thing you’re left to wonder is how they keep cranking out albums as good as this one. And to that I say, let them keep their secrets. OVERKILL discovered their own fountain of youth somewhere out on the killing road a long time ago and it allows them to tirelessly spread their thrash lunacy around the globe, one city at a time. May they forever reign.