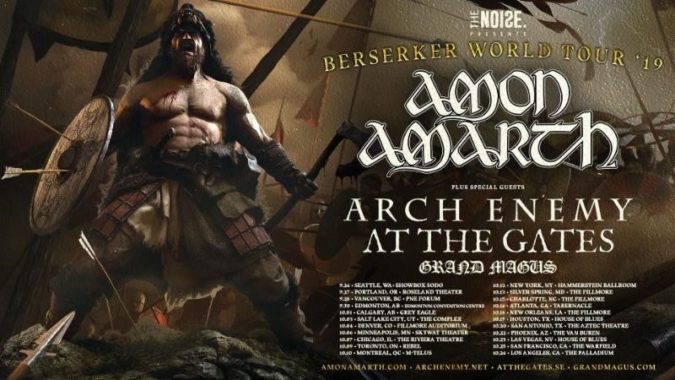 In February, Riff Relevant reported that a new album from Swedish power doom trio, GRAND MAGUS, titled ‘Wolf God‘, was on its way.

‘Wolf God‘ arrived from Nuclear Blast last month (April 19th) and was accompanied by a tour announcement of almost unimaginable proportions. In it, GRAND MAGUS – JB Christoffersson (guitars, vocals), Fox Skinner (bass), and Ludwig Witt (drums) – revealed they will take part in the upcoming “Berserker World Tour 2019” alongside Amon Amarth, At The Gates, and Arch Enemy.

The tour features four of Sweden’s most popular metal acts originating from differing times and genres. With GRAND MAGUS‘ arrival at the start of this millennium, the band began ascending toward becoming a première doom band who, over time, instilled elements of traditional power metal in their music. With their ninth studio album ‘Wolf God‘ now out in the public arena, GRAND MAGUS prove themselves worthy as the ambassadors to all that revere doom heaviness rife with groove.

This Swedish crusade upon the North American continent is to be at the direction of Viking warmongers Amon Amarth. This Stockholm-based crew are no strangers to metallic savagery and will release their own ninth studio album this very week, as ‘Berserker‘ arrives May 3rd from Metal Blade Records. As their name translates to “Mount Doom” in the Sindarin dialect from J.R.R. Tolkien’s The Lord Of The Rings, Amon Amarth is more than capable of mounting a savage campaign of musical annihilation.

With At The Gates in tow, metal fans are treated to one of Swedish metal’s most celebrated and influential bands. Credited with being part of the pioneering movement that would become an element of extreme music around the globe, At The Gates has remained busy since its reformation in 2007. In high demand, their latest album from Century Media Records, ‘To Drink From The Night Itself‘, is an integral step in a legacy that includes such landmark releases as 1995’s ‘Slaughter Of The Soul’ and 1992’s ‘The Red In The Sky Is Ours.’

Then there is Arch Enemy, another leading band from the early days of the Swedish heavy metal scene’s explosion in the Nineties. Concerned fans have wondered if the band’s lead vocalist changes throughout the years would bring an end to this highly popular act’s existence. With the introduction of ex-The Agonist singer, Alissa White-Gluz, on 2014’s ‘War Eternal’ release for Century Media, followed by 2017’s ‘Will To Power’, they quickly realized they had nothing to fear. With alumni from such bands as Carcass, Nevermore, King Diamond, Spiritual Beggars, Candlemass, and Armageddon beside her, Alissa and Arch Enemy have risen to a revered status with fans unheard of by most acts.

The itinerary can be found below for the “Berserker World Tour 2019” with Grand Magus, Amon Amarth, At The Gates, and Arch Enemy, along with the lyric video for the title track of the new ‘Wolf God‘ album from Grand Magus.