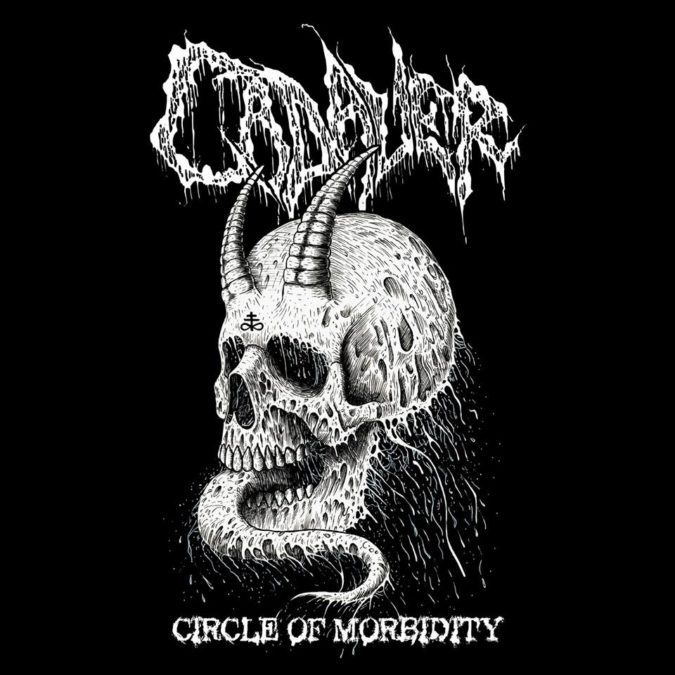 The duo released a demo ‘Into The Outside‘ that same year, sparking local interest in them. The following year, they were joined by bassist René Jansen. CADAVER, as a trio, recorded and released a string of demos over the next two years, which included ‘Abnormal Deformity‘ and ‘Sunset At Dawn‘ in 1989, and ‘Demo 2‘ in 1990. These helped the band land the attention of Carcass’ Bill Steer and Jeff Walker, who soon signed them to their Earache Records imprint label, Necrosis Records.

The year 1990 continued to be productive for CADAVER, eventually they recorded their début album, ‘Hallucinating Anxiety’. The record was a raw, vicious onslaught of down-tuned, sludgy grindcore issued as both a split release with the Carnage album ‘Dark Recollections‘, as well as its own stand-alone album. Shortly after the album’s release, René Jansen was replaced in the band by Eilert Solstad.

CADAVER released a second album in 1992, ‘…In Pains‘, that fans felt was a much more technically progressive album than its predecessor. This was a growing trend in death metal at this period in time, with bands like Death and Cynic paving the way with more atmospheric qualities in their music. Unfortunately, some type of dissension within CADAVER caused the band to fold in 1993 and remained that way until resurrected by Odden (using the name Neddo) in 1999.

As a quartet completed with new members – drummer and multi-instrumentalist Czral (aka Carl-Michael Eide), bassist and guitarist L.J. Balvaz, and multi-instrumentalist Apollyon (Ole Jørgen Moe) – the band tweaked its name to CADAVER INC. Under this name, they issued a demo, ‘Primal‘, in 2000, with a live outing ‘Live Inferno‘ and studio album ‘Discipline‘ both in 2001. A tour supporting Morbid Angel and Extreme Noise Terror followed, but so did controversy when apparently a website that accompanied the band’s return claimed to sell “alibis” for murders. The negative attention this drew inspired the band to return to using the more simplified CADAVER once again. In 2004, we saw the issuance of their final album, the Candlelight Records release ‘Necrosis‘, followed by the band’s last show in 2005.

Alas, not everything stays dead and this holds true in death metal itself, or even if your band’s name is inspired by something no longer alive. In this case, the very idea of this band would not die a quiet death, no way, and in 2014, Anders Odden decided to resurrect CADAVER. Since that decision, things have been as quiet as a graveyard until recently, when Odden revealed that an all-new chapter in the book of CADAVER was being written.

Not only are they active, but Odden recruited some amazing collaborators, both in CADAVER, as well as upon the first new song from them in 15 years! First, Anders “Neddo” Odden is joined by drummer extraordinaire Dirk Verbeuren (Megadeth, Satyricon live, ex-Soilwork / Powermad) as the official kit-man for the newly reincarnated CADAVER. You can hear them both today, along with the iconic guest vocalist appearing on that new track, “Circle Of Morbidity” – none other than Possessed’s Jeff Becerra.

CADAVER has just issued the new song in an official video clip with both Odden and Becerra sharing some insights about how this all came to pass. Odden is the first to comment, saying:

“When I heard Possessed for the first time in 1985, I knew this was my kind of music. To have the original creator of death metal on our comeback single is huge for me, I am beyond thrilled to show everybody what we have been cooking up this time around.“

“It was a great honor being asked by Anders to sing backup vocals on “Circle Of Morbidity.” Of course, working with Anders Odden & Dirk Verbeuren is like a fantastic nightmare, brutal and heavy as hell. Congratulations to Anders Odden and Cadaver on this brand new single. Amazing song, thank you!“

Odden continues on how Dirk Verbeuren was brought into the fold:

“In my heart I have always had the notion that Cadaver exists somehow. Dirk played session live work for Satyricon on the 70.000 Tons Of Metal cruise in 2014 and we got to know each other then. He talked about how much he loved Cadaver and I then told him that I had been recording demos for 10 years without a drummer….so, being the guy he is, he then says, ‘Send the songs to me!‘”

We now know further results of this unexpected union, with Anders’ confirmation that he is in talks with several labels about releasing a new CADAVER album, ‘Edder & Bile‘. The album is anticipated to arrive before the end of this year.