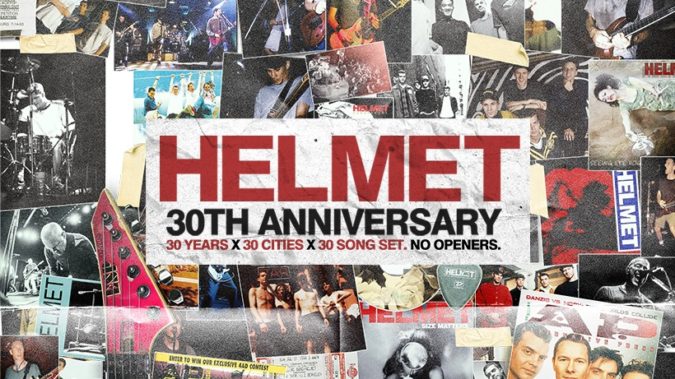 Noise rock-mongering icons HELMET announce they will celebrate the band’s 30th anniversary with an extensive European Tour this September – October.

Dubbing the run along the lines of “30 X 30 X 30“, the 30th-anniversary trek will consist of 30 cities with each set consisting of 30 songs and there will be no opening acts. HELMET has indicated that there is also a U.S. tour planned, with band founder, guitarist, and vocalist Page Hamilton commenting:

“The day John, Peter and I auditioned Henry is the day I consider to be the beginning of HELMET. The year was 1989 and I think the month was May. I love playing this music more than ever with my current bandmates Kyle, Dan and Dave. To celebrate 30 years of recording and touring, we decided to play 30 songs a night in 30 cities in Europe and 30 more cities in the USA. We hope to see you all there.“

Hamilton got his start playing in some seemingly unlikely places, especially when compared to the music of HELMET. Trained in jazz guitar, Page has substantial connections with avant-garde music and cut his teeth playing with one of its greatest representatives, Glenn Branca. He was also a member of indie rock stalwarts Band Of Susans, prior to the official launch of HELMET in 1989.

The band’s 1990 début album for the independent label Amphetamine Reptile, ‘Strap It On‘, helped in fueling an unprecedented major-label bidding war to sign HELMET. Ultimately, they went with Interscope Records and it is rumored that the members received in excess of $1 million at signing, along with a previously unheard amount of control over their work.

In 1992, they showed the world they deserved that attention with the release of the ‘Meantime‘ album. It went on to Gold certification in 1994, since selling over 2 million copies worldwide to become HELMET‘s top-selling album ever. Subsequent records ‘Betty‘ (1994) and ‘Aftertaste‘ (1997) were also well-received albums but inner turmoils within the band would bring their dissolution in 1998.

Page eventually revived HELMET in 2004, and since then has released four consistently solid albums with a variety of different musicians, including drummer John Tempesta (White Zombie, Testament) and bassist Chris Traynor (Orange 9 Millimeter, Bush). Those albums are 2004’s ‘Size Matters‘, 2006’s ‘Monochrome‘, and 2010’s ‘Seeing Eye Dog‘, with the very latest, 2016’s ‘Dead To The World‘, featuring the players that will perform with Page on the upcoming tour – Kyle Stevenson (drums), Dan Beeman (guitar), and Dave Case (bass).

Find the itinerary for this fall’s HELMET tour of Europe celebrating the band’s 30th anniversary below, along with a tour trailer video. Tickets are on sale now.