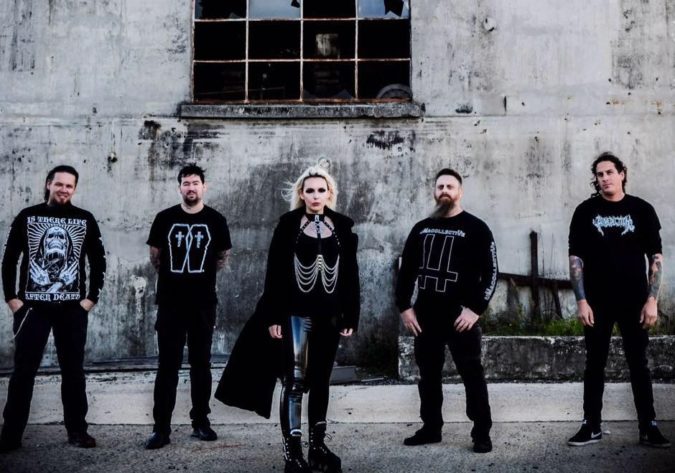 Following the unfortunate circumstances that prevented an appearance at the Maryland Doom Fest 2019, Tasmania’s INTERITUM is undeterred in their dooming over the world.

Recently, this thunderously pummeling group from down under shared a new single entitled “Created And Rejected” by means of an official video. This latest deluge of aurally dense musicality is the band’s third single to arrive from an upcoming full-length album release expected before 2019’s end. Anyone familiar with INTERITUM should notice there is something different about the band, something revealed in today’s visualizer presentation.

That revelation being the introduction to new INTERITUM guitarist, Jack Hrycyszyn. He joins fellow guitarist Jarrod Gaye and drummer Paul Wallace in the band, alongside husband and wife founders of INTERITUM, Trent (bass) and Kel Barrett (vocals). The duo has been responsible for recording the music made by the band since their 2017 ‘Conformed Suffering‘ EP, with mixing and mastering by Joe Haley (Psycroptic), also on their latest output.

Speaking of, “Created And Rejected” is a composition emanating foreboding vibes right from its start, a consistent ominousness, if you will. Evoking a sense of dread and disquieting suspicions as the fuzz-heavy roll out sinks hooks into the listener and once embedded, riffs and rhythms go to work. Once Kel’s haunting vocals enter the fray, there is no escaping the song’s twisting, winding clutches.

As mentioned, “Created And Rejected” is the third single to arrive from INTERITUM following “Wasted Away” and “Suck My Humanity“. The visual accompaniment below was created at the direction of Kel Barrett and is a most acceptable gesture toward what massive, sludgy doom awaits with the upcoming arrival of the band’s new album.

See INTERITUM live at the Metal United Down Under one-day event this September: