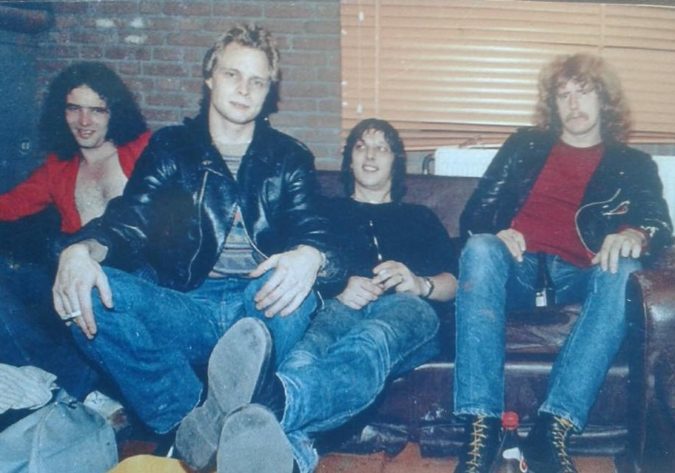 In one of their earliest live appearances, SAD IRON participated in a Battle Of The Bands competition, where they astounded onlookers with their brand of heavy metal. By all accounts, they won over the attendees and were reportedly voted the event’s best band by the crowd. With the word of mouth buzz afterward about the quartet building, SAD IRON released two offerings in 1982, the first a two-song Demo. This was followed by their contributing three songs (“Sad Iron“, “Schoolgirls“, “Thunder & Lightning“) for inclusion on a split compilation from Universe Productions, ‘Holland Heavy Metal Vol. 1‘.

Sometime around that point, SAD IRON underwent membership changes, resulting in a new vocalist Herke van der Poel and bassist Leo Ockeloen coming aboard. This occurred just prior to their entering K&M Studios where they recorded and then released their official début album, ‘Total Damnation‘, in 1983. With comparisons to Raven and Exciter, SAD IRON was eventually recognized as an act integral to launching the New Wave Of Dutch Heavy Metal.

In 1985, with another new bassist, Charles Heijnen, and drummer Peter van de Wouden, the band entered the studio to record their planned sophomore album, ‘The Antichrist‘. The album was completed, but financial issues at the label almost immediately resulted in its going bankrupt and the album became a casualty of this misfortune. It got shelved and would not see the light of day at that point, an outcome that derailed SAD IRON shortly thereafter.

It would be 15 years before SAD IRON was heard from again, resurfacing in 2000, to play a reunion show at the Heavy Metal Maniacs Festival in Hoorn, The Netherlands. Rejuvenated, the band embarked on the “Dutch Steel Attack Tour” with fellow metallic countrymen, Vortex and Hammerhawk. Playing a variety of venues in The Netherlands and abroad, response to the return of SAD IRON was incredibly welcoming, but soon the band was inactive again.

The following year (2015), Dutch heavy metal journalist Robert Haagsma generated interest in SAD IRON by means of their inclusion on the compilation album ‘Dutch Steel’. Haagsma’s efforts ignited so much interest, in fact, that it lead to the 2016 release of the long-forgotten second recording from SAD IRON, ‘The Antichrist‘, via the label Dutch Steel.

With SAD IRON back with a vengeance, the band released their third studio album, ‘Chapter II: The Deal‘, through Hellion Records this past March 2019. The record has garnered respectable critical acclaim in the months since then.