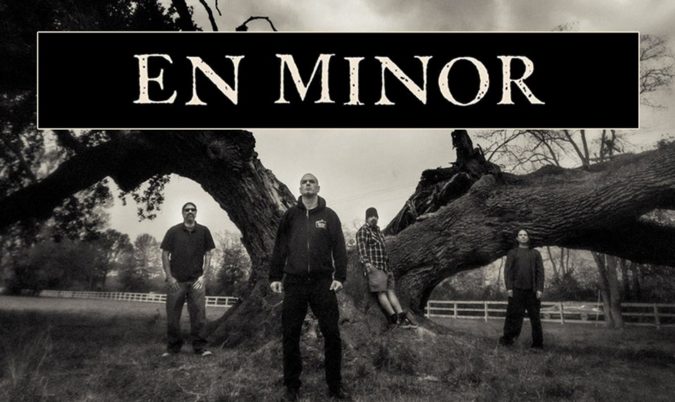 After over three years of anxiously awaiting to hear their music and many more years of shadowy talk about the project itself, EN MINOR deliver their first music for public consumption.

As you may or may not know, EN MINOR is the long whispered about goth rock endeavor of famed metal musician Philip H. Anselmo (Pantera, Down, Scour). We touched upon its existence in a 2017 article, as the band’s unveiling was expected in 2018. Though that time frame came and went, all hope was not irretrievably lost and now the anxiety subsides with EN MINOR presenting their first single, “On The Floor“.

Streaming below, the song is one of two tracks that will arrive via the band’s début 7″, to be released on August 2nd through Housecore Records. Joining Anselmo in the make-up of EN MINOR are Stephen Taylor (Superjoint, Philip H. Anselmo & The Illegals, Wovenhand, 16 Horsepower), Kevin Bond (Superjoint, Christ Inversion, Artimus Pyledriver), Jimmy Bower (Eyehategod, Down, Superjoint), Calvin and Joiner Dover (The Dover Brothers), and Steve Bernal (previously first cellist in Temple Symphony Orchestra).

The song “On The Floor” and the music of EN MINOR, is a starkly different offering compared to most of Anselmo’s musicality. The initial revelation of the project sparked speculation about his ability to sing vocals that were decisively cleaner, or of a softer nature, with the emotive inflection this music seemingly would require. Each listener will ultimately have to judge for themselves. As for me, my opinion is that Phil pulls it off nicely in this particular track.

EN MINOR is a true labor of love for Phil Anselmo, its musical template dates back to his being around the age of 9 years old. This is something he elaborated on in the past, commenting:

“The initial strains – in the most primitive sense – came about when I was given my first guitar at nine-years old. I didn’t have the patience to learn other people’s music, so I wrote my own. And some of those early parts are still prevalent in the songs we’re working with now. Fast forward to 1988 when I bought my first four-track recorder; those old songs took on a new life and newer songs were written. Heavy metal was at the forefront of my performance-based output, but these little four-track songs were always there. I always had an apprehension about allowing them to be heard though, because they were so different; only a small circle of close friends got to hear them.“

Over the years, Phil, his friends, and other close musical associates would gradually tinker with the music. They began to flesh out the songs more extensively in the early ’90s, recording under the project name Body & Blood at one point. He continues:

“These old four-track songs took on an even newer life jamming with these cats. We learned a few of the songs and wrote several more, and soon we were recording under the moniker ‘Body & Blood.’ We wrote more songs, all recorded on a newer model four-track. It was fun. We did it for the vibe. And it was pleasing to break away from multi-tracking studios and heavy metal. Metal music consumed most of our time and lives. Those ‘B&B’ sessions were damned-near therapeutic.

“We kept things simple and just jammed when everyone was home and played our recordings for friends. Then I eventually moved again, Hurricane Katrina hit, and life sent all of us in different directions.“

After meeting Stephen Taylor in 2012, the materialization of EN MINOR really took shape, as detailed further by Phil:

“He and I began experimenting with some vibe-y stuff, and soon after began recording the sessions. This led to the current incarnation of En Minor. Together, we re-worked a few of the old four-track songs and wrote several new ones in short order. These sessions are hypnotic and pulling. And we continue to write songs suitable for this project to this day. Ugly and beautiful, En Minor, isn’t ‘party music. This is ‘kill the party’ music.“

Let that happy-time homicide begin as we share “On The Floor” from EN MINOR here, the two-song self-titled EP it hails from arriving digitally and on vinyl, August 2nd from Housecore Records. A full-length album is expected to arrive later this year.

EN MINOR will make their large-scale live debut at this year’s edition of Psycho Las Vegas, set to take place August 16-18 at the Mandalay Bay Resort & Casino in Las Vegas, Nevada. This will be preceded by a “secret show” in New Orleans just days before the P.L.V. appearance.