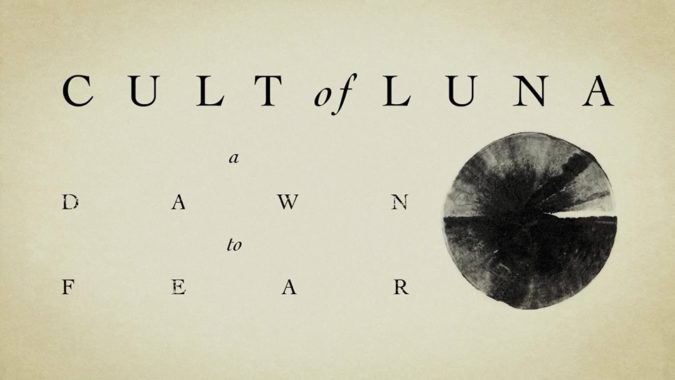 Available in a variety of formats, ‘A Dawn To Fear‘ is set to arrive on September 20th from CULT OF LUNA and Metal Blade Records jointly. Today’s revelation of the upcoming release is accompanied by the album artwork and details. Also, an ambitious new official video for the first single, “The Silent Man“, is streaming below.

The ambitious aspect lies in the reality of the video’s nearly 11-minute running time, yet also in the recesses of the song itself. Through the use of organs and other acoustic instruments in place of electronic keyboards, a decidedly more melancholic quality surfaces. At the same time, the overall direction of the composition is excessively heavy in density and tone.

These qualities are prevalent throughout this recording’s eight songs as ‘A Dawn To Fear‘ is a monstrous record, one of the band’s most epic, emotive, and inventive outings yet. It was tracked over an 11-day period at Ocean Sound Recordings in Norway, the musicians living and creating in the isolated, coastal located studio. The finished product clocked in at a 79-minute running time, the length of a double CD, but any talk of cutting a track did not get far. This was addressed by vocalist, guitarist, and lead songwriter Johannes Persson:

“We sat down and looked at that song list and we couldn’t. It would make it easier for us and everyone involved to cut one song, making it no problem when it comes to LPs and CDs, but we just couldn’t see the album any other way. These songs are the songs that make sense. If we cut this song or that song, it would screw up the whole dynamic of the record.‘

As for the overall direction of the album itself, Persson adds:

“Going into the process, we knew the album we wanted to make, an antithesis of what we’ve done before. For pretty much every album there’s been a very concrete theme. We’ve known from the start the kind of story we wanted to tell, and I didn’t want that to be the case. I’ve seen a lot of subtle changes and patterns in my own behavior and my own thinking the last couple of years, and I wanted this to be a completely spontaneous process. I just wanted to see what came out of me, and A Dawn To Fear is the result of that.“

CULT OF LUNA will release ‘A Dawn To Fear‘ on September 20th in the formats below. Pre-order options can be found at MetalBlade.com. The release will be followed by Scandinavian and European tour dates in October – December with the itinerary listed below.