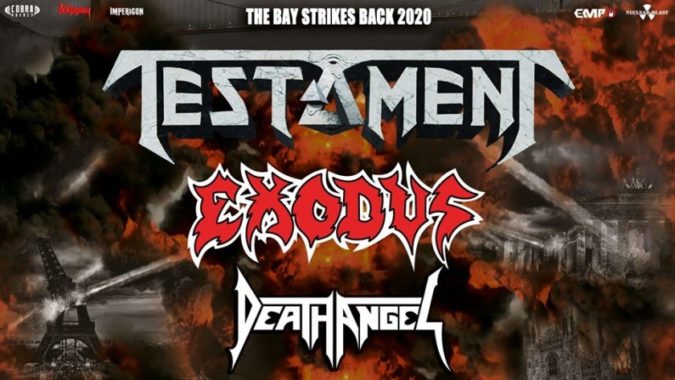 Three of the most legendary representatives of the classic Bay Area thrash metal movement – TESTAMENT, EXODUS, and DEATH ANGEL – announce they will unite for an epic tour next year.

“The Bay Strikes Back 2020” European Tour sees this trio of pioneering metal stalwarts joining forces for what assures to be a series of unforgettable shows. The trek will kick off February 6th in Copenhagen, Denmark, and will hit 25 cities before concluding on March 11th in Hanover, Germany.

Members from each of these three bands shared the following exciting comments about the planned tour, saying:

“It’s finally happening!!!! All of us have spoken over the years of how killer it would be to tour together and bring Bay Area thrash metal across the world and we are starting in Europe. I’m sure I can speak for all three bands in saying that we are proud of where we all came from and we are still delivering some of the best thrash metal we can to the fans. Be ready for ‘The Bay Strikes Back’ tour 2020.” – TESTAMENT‘s Chuck Billy

“I am fired up to FINALLY return to Europe with EXODUS! Along with our Bay Area friends TESTAMENT and DEATH ANGEL! An epic tour for the ages! Looking forward to crushing everyone Bay Area style! See you there!!! I cannot wait!” – EXODUS‘ Gary Holt

“We couldn’t be more excited to announce our upcoming tour with TESTAMENT and EXODUS! Bay Area thrash attack IN full force! All three bands have been close friends for decades and our mutual respect is of the highest level. That said, we will surely push each other to go beyond expectations each and every night. This is a first — the three of us have never toured together in the same package… it’s about time! See you in the pit!” – DEATH ANGEL‘s Rob Cavestany

TESTAMENT recently wrapped up recording sessions for an as-yet-untitled new album, the follow-up to 2016’s ‘Brotherhood Of The Snake‘, tentatively expected to arrive in early 2020. The album was once again tracked with Juan Urteaga (Skinlab, Sadus, Vicious Rumors) with mixing and mastering by Andy Sneap (Judas Priest, Napalm Death, Overkill).

EXODUS recently reported they were in writing mode for the eventual follow-up to 2014’s ‘Blood In Blood Out‘, marking the return of singer Steve “Zetro“ Souza to the band. Most people are aware that guitarist Gary Holt has been playing with Slayer on an ongoing farewell to fans, their final world tour.

DEATH ANGEL issued their ninth studio album via Nuclear Blast Records in May, the critically acclaimed ‘Humanicide‘. The recording is the band’s sixth offering of original music since they returned to activity with 2004’s ‘The Art Of Dying‘, at the time it was their first such since 1990’s ‘Act III‘.

Here is the itinerary for next year’s “The Bay Strikes Back 2020” European Tour with TESTAMENT, EXODUS, and DEATH ANGEL. Let’s hope that the U.S. gets a leg for this incredible union of thrash metal legends!

“The Bay Strikes Back 2020” European Tour